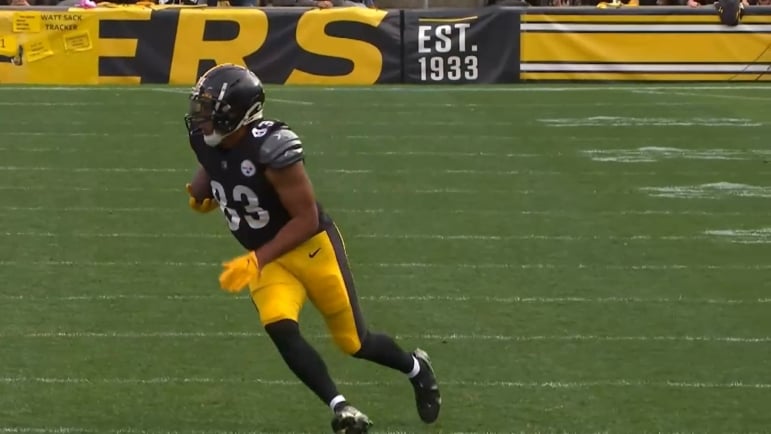 He didn’t get into the end zone, but Pittsburgh Steelers rookie tight end Connor Heyward made one of the biggest plays of the day for the offense, converting on a 45-yard catch and run in the fourth quarter that helped give them the points needed to provide the margin of victory.

The play came on 3rd and 6 with 10:58 to go. Pittsburgh quick-snapped to catch the Tampa Bay Buccaneers offsides, which they did successfully, and quarterback Mitch Trubisky was able to find Heyward wide open in a soft spot for the explosive yardage on a free play.

“Man, I was excited”, the rookie’s older brother, Cameron Heyward, told reporters after the game via the team’s website. “It was a little bit unexpected. I’m glad he was ready for the moment. But I needed him to score on that! But it was a great catch, and he’s got to get in better shape”.

He’s ribbing his baby brother, of course. Connor was tackled down at the 11-yard line after weaving his way through open grass. The Steelers certainly didn’t draft him in the sixth round for his gazelle-like speed or physique. But it’s never a bad idea to get in better shape.

Heyward was tasked with playing a large role in today’s game because starting tight end Pat Freiermuth was unavailable after suffering a concussion last week. That left the team with just Zach Gentry and the rookie, and they mixed in a bit of tackle-eligible looks with lineman Trent Scott, as well.

He finished the game with two catches on three targets for 49 yards after landing his first two targets and first two catches at the end of last week’s game, coming in to relieve Freiermuth. But he has dressed for every game, and has been a staple on special teams, which is what they anticipated when they made the decision to draft him. He played 90 snaps on special teams through the first five games, with 10 of his 22 snaps on offense coming in week five. He obviously exceeded that today.

The Steelers got into a habit for a long while after Heath Miller and Matt Spaeth retired of only dressing two tight ends and relying on a tackle-eligible if they needed a third body. That has recently changed, and they now have a group of three that they really believe in with Freiermuth, Gentry, and now Heyward.

The latter, of course, is still just beginning to establish himself, and they are still working on figuring out what roles suit him. We will have to dig into this game to figure out just what they did, but I know they did feature him in the backfield as a lead blocker at least once.

Needless to say, however, the big 45-yard reception—the Steelers’ first play of 40-plus yards on the season offensively—will be his highlight of the game. Perhaps even the highlight of his rookie season. But he can always change that.