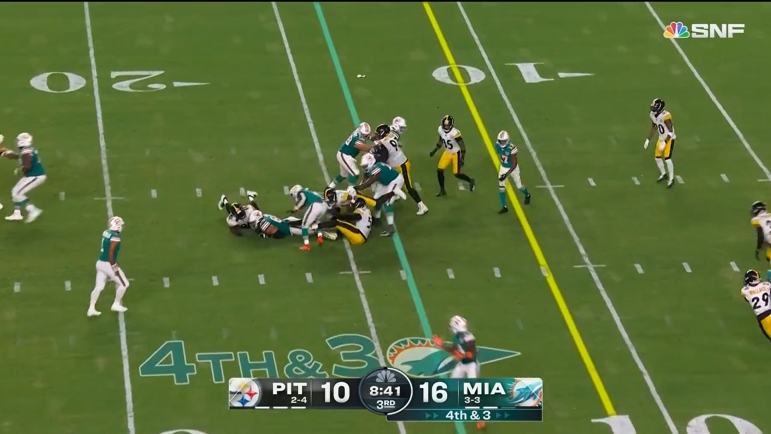 After a crisp opening drive, it felt like Sunday night’s game against the Miami Dolphins would be Buffalo Bills 2.0. Or 2021 Cincinnati Bengals 2.0. Or…you get the idea. Miami raced out to a 7-0 lead with an opening drive that marched down the field. From there on out, the Pittsburgh Steelers’ tightened up and held them to just nine points, three field goals, the rest of the way, though it wasn’t enough in a 16-10 defeat.

On the latest episode of his Not Just Football podcast, Cam Heyward discussed how the Steelers’ defense adjusted to keep this game close. Though Heyward started off by talking about the difficulty of that first drive.

“I’m not going to lie,” Heyward said. “That first series, everything was moving so fast. Even the play they scored on, I thought I had a pretty good rush but then Tua made me wrong and sprinted in and sucked the defense in and was able to dump the ball outside.”

After two negative plays to begin the game, Miami got moving in the right direction. As we wrote about, Tua Tagovailoa attacked the middle of the field hitting WR Jaylen Waddle for a 20-yard gain on 2nd and 19. The Dolphins couldn’t be stopped the rest of the drive, using misdirection to freeze the Steelers’ front seven while finding WR Tyreek Hill and TE Mike Gesicki behind. As Heyward mentioned, Tagovailoa scrambled and found RB Raheem Mostert at the last second for a 3rd and Goal touchdown to open up the game’s scoring. But Pittsburgh quickly went back to the drawing board, Heyward saying the defense made one crucial change.

After putting up 13 first-quarter points, Miami was held to a field goal the rest of the game and Pittsburgh’s defense pitched a second half shutout. It marked just the second time since 2018 the Steelers allowed 16+ points in the first half while not allowing a single point in the third or fourth quarters (a 2020 win over the Texans is the other).

Heyward pointed out one second half sequence that proved key in Pittsburgh’s defense making big plays.

Miami was stuffed on third and fourth down on their opening second half possession. On third down, Heyward got off the left guard’s block while on fourth down, Larry Ogunjobi ripped through to blow up the run.

Still, Pittsburgh’s defense dropped several interceptions that would’ve either taken some of those field goals off the board or given the Steelers’ offense desperately needed short fields. With an offense that can’t do much of anything, Pittsburgh’s defense will have to find ways to continue to elevate its game. They’ll have a tough challenge this weekend against the Philadelphia Eagles, undefeated with a top-five offense.

Check out the latest episode below.