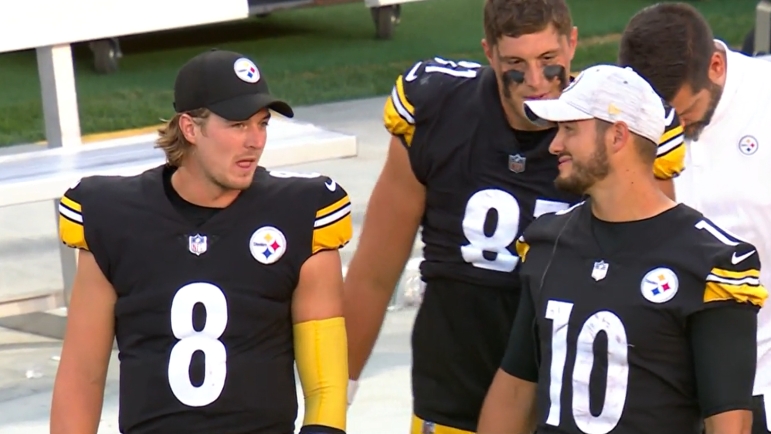 At least going into today’s pre-game press conference with head coach Mike Tomlin, we still don’t know definitively who will be the starting quarterback for the Pittsburgh Steelers against the Buffalo Bills—even if it would be shocking if it were not Kenny Pickett.

The team’s first-round draft pick, Pickett was named the Steelers’ backup to Mitch Trubisky to start the regular season, and he sat on the bench for the first three and a half games before Tomlin pulled the trigger at halftime on Sunday, saying after the game that he felt the team “needed a spark”, but also would not commit at the time to a permanent change.

We don’t know if Tomlin will announce a starter today, and so we don’t know what the Bills and their head coach, Sean McDermott, will know as they go into their week of preparation for facing the Steelers. But he didn’t seem all too concerned with the personnel specifics.

“It presents a challenge to some extent, but we’ve got to prepare for their system more than anything”, he told reporters yesterday when asked if it posed a challenge not knowing if his team were preparing for Trubisky or Pickett. “This is a team that beat us last season at our home field. They were in the playoffs last season. They’re a good football team, a well-coached football team, so we’ve got to move on and get ourselves ready for a good Pittsburgh Steelers football team”.

The Steelers did indeed go into Buffalo in the regular season opener last year and snuck out with a win that nobody really expected them to have. But they had T.J. Watt in that game, and a blocked punt returned for a touchdown, and those things sure don’t hurt.

Both Trubisky and Pickett on a fundamental level share a lot of the same play-type characteristics, anyway. It’s not as though they play a completely different style of ball, like preparing for Tom Brady versus Lamar Jackson. And so it ultimately comes down to what’s available to you.

“You’ve just got to prepare for what you know. Those are the controllables that we can control”, McDermott said. “Other than that, we’ve really got to focus on ourselves. We start every week with a healthy amount of respect for the opponent, and I think that’s a good place to start”.

If I were to guess, though, I would imagine that they are expecting to face Pickett right now, and they may even find that out definitively this afternoon. I don’t see Tomlin trying to sit on the question of who is going to start next week’s game for an extra day, since the cat will be out of the bag once they start taking reps.

He’s not going to be able to stop information from getting out about who is working with the first-team offense, and I highly doubt he’ll try to divide the reps, especially if he’s starting Pickett. He’ll need every rep he can get.