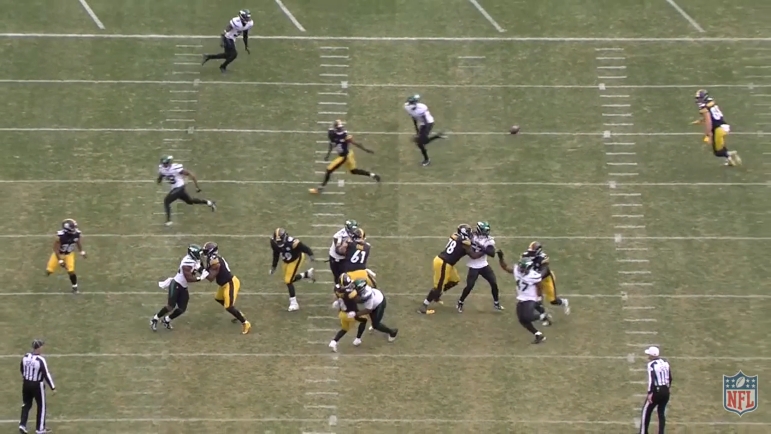 Pittsburgh Steelers quarterback Kenny Pickett attempted 13 passes in his NFL debut on Sunday, completing all of them, although three were caught by the defense. Within the 10 completed passes to his teammates, however, there were a few standout moments, highlighted by a bullet pass to tight end Pat Freiermuth on 3rd and long at the 20-yard line to set up a touchdown in the fourth quarter.

Facing a 3rd and 8, Pickett felt the pressure from the New York Jets’ Quinnen Williams, who got a clean shot at the rookie after a breakdown in communication from the offensive line let him go free. Despite knowing all the way that he was going to take a shot, he held the ball until the last moment and delivered the ball to an open Freiermuth in a soft zone. And it got his predecessor’s attention.

“I thought he did some really good things”, former Steelers quarterback Ben Roethlisberger said yesterday on his Footbahlin podcast, of Pickett. “Obviously he showed toughness. He threw a ball down the middle to Pat and he got hit right in the chin and stood in there and took it. Seems really tough, like he kind of bounced up laughing about it. You like to see that, especially from a young guy, to stand there and take that”.

It’s been the play he made that’s been talked about most, though his scrambles and sneaks were also noteworthy, and he had some fine throws to fellow rookie George Pickens as well, including a nifty back shoulder that also converted on third down just a few plays before the one to Freiermuth.

It’s no surprise that Roethlisberger was among the many who took a liking to it, of course. He built a reputation around standing in the pocket and taking hits when he had to, if he wasn’t throwing defenders off of him, to deliver the ball. At least, that’s how he played through most of his career before adopting a conservative approach more often than not in his final seasons.

But you better be willing to hang in there if you’re a young guy who hasn’t proven anything, if that’s the throw that needs to be made. That it came on a third and long just on the cusp of the red zone only makes is all the more noteworthy.

And the thing is, it wasn’t out of character. He made those kind of plays in college, and then he made them during the preseason as well. The guy was smiling at Williams while he was still on the ground after he saw that he completed the pass. He got up looking like a maniac.

You love to see it. As long as he doesn’t get himself hurt.