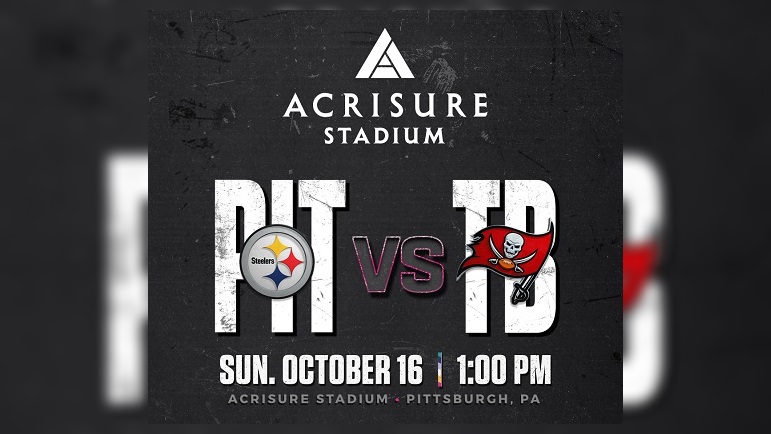 The Steelers are up 10-9, but twice had the ball in their hands while up 10-6. Missing out on a massive opportunity to extend their lead prior to regaining the ball at the top of the second half.

Steven Sims returned the kickoff 89 yards. He was tracked down from behind and the ball was punched out, but he fell back on the ball. Kenny Pickett complete to Diontae Johnson for 6 yards on an out route. Pickett threw the ball away on 2nd. On 3rd and 4, Pickett incomplete to George Pickens. Field goal is good. 13-9 Steelers.

Since the Steelers opening drive TD, they're averaging just 1.8 yards per play.

A 28 yard pass with an excellent throw and an excellent catch to Chris Godwin. Terrell Edmunds in coverage, but nothing he could do there. Defensive holding the next play by Tyson Alualu and all of a sudden its 1st and 10 near the red zone.

Fournette is really building steam, picking up 8 on 1st. On 2nd, Spillane in coverage forcing the incompletion. 3rd and 2, Fournette picked up two  to convert and Larry Ogunjobi was injured making the tackle.

Ogunjobi in some serious pain down on the field. That would be a huge loss. He has been a big spark for this defense at times today.

False start makes it 1st and 15. Forcing another field goal would be huge for this banged up defense and that penalty makes it more likely. Brady complete to Russell Gage for 9 yards. 2nd and 6, incomplete to Mike Evans, but James Pierre called for holding. Automatic first down.

Second time the Steelers have gone offsides on a FG today. Tre Norwood and James Pierre.

Some how, some way, the Steelers are holding on to this lead.

The Steelers starting with the ball at their 25 after a touchback. Offensive holding called on what would have been a 27 yard completion for Pickett.

1st and 20, and Mitch Trubisky is in. Incomplete on 1st down, jarred loose by a hit on Najee Harris. On 2nd, complete to George Pickens for 5 yards. 3rd and 15, Trubisky complete to Chase Claypool for 16 yards and the drive lives.

Kevin Dotson is having one of the worst games of his career. Legitimately may need to bench him today. #Steelers

Per the FOX broadcast, QB Kenny Pickett heading to the locker room. #Steelers

Jaylen Warren span his way forward to avoid the TFL, but picked up just one. On 2nd and 9, Complete to Connor Heyward for 4 yards. 3rd and 5 in the no-huddle. Incomplete intended for Diontae Johnson. The Steelers dig themselves out of the field position hole, but have to punt. Punt downed at the 15 yard line.

This is setting up as a Kenny Pickett returns from the locker room to save the Steelers type game.

Big Ben in the stadium and been texting with Pickett, learning from the best. #Steelers

This is the time of the game the last few weeks where the defense has been falling apart. A long scoring drive here with Pickett hurt could be a killer.

On 1st down, offensive holding backs the Buccaneers up to the 8 yard line. 1st and 17, White rushed up the middle for 4 yards. 2nd and 13, a completion to Cameron Brate who was hurt on the play. Picked up 6. 3rd and 7, deep on their own end. Big opportunity for the Steelers’ defense.

Brate put on a backboard and being carted off. Scary moment on the field. We hope Brate is okay as he goes to get further care elsewhere.

Thumbs up from Cameron Brate as he is taken off #Steelers

QB Kenny Pickett is being evaluated for a concussion and is questionable to return.

Tom Brady complete for 6 yards. Needed 7. 4th and 1 deep in their own end. Big decision here for Todd Bowles. They decide to punt. What a great tackle by Myles Jack.

Steven Sims returned the punt 24 yards to the 48 yard line. Mitch Trubisky and the offense getting excellent starting field position. The offense needs at least one more touchdown to win this thing.

Happy to have you as the starting return man Mr. Sims. #Steelers

Mitch Trubisky sacked for a loss of 6 yards on 1st. Chuks Okorafor beat out on the island. On 2nd and 16, Claypool caught the pass for 11 yards. 3rd and 4, Trubisky incomplete on the check down to Jaylen Warren. Matt Canada’s offense blowing every possible opportunity here. Thankfully the punt return gave the Steelers the edge in the field position battle.

The Harvin punt went just 30 yards, but went out of bounds at the 17.

Excellent short yardage play by the Pittsburgh Steelers today. Stuffed Fournette for a loss on 3rd and short. Forced the punt. Steelers will take over from their own 29. Sims ran backwards on that one.

On 1st and 10, Najee Harris fought through some contact for two yards. Sims went around left end for a loss of five. That kind of play is a drive killer. No clue why Sims stopped his feet there, he should have attempted to bounce further outside. 3rd and 13, Trubisky complete to George Pickens for 14. Huge conversion for Pickens and Trubisky.

On 1st and 10, Najee up the middle for 5 yards. On 2nd, Najee lost one. 3rd and 6, Connor Heyward in the middle of the field running for 45 yards. Too many men on the field for Tampa, but it was declined. Huge double explosive passing play for this offense and very timely, too. Longest pass play of the season for the Steelers.

Najee Harris in wildcat, rushed for 5 yards. Trubisky the next play complete to Chase Claypool in the end zone. Touchdown! 20-12 Steelers.

That was the first wide receiver touchdown of the season for the Steelers.

27 yard kick return, so Brady takes over down 8 in the fourth quarter. Derek Watt with the special teams tackle.

1st and 10, Tom Brady complete to Fournette for 1 yard. Edmunds and Reed with the tackle. On 2nd and 9, Godwin gained 11 through the air. Myles Jack injured during the play. Ripped his own helmet off sitting down on the turf.

On 1st and 10, Fournette picked up 2 yards. On 2nd and 8, a completion to Mike Evans with Josh Jackson in coverage for 4 yards. On 3rd and 4, a long completion to Otton for 17 yards. Good coverage, but a better throw and catch.

On 1st, defensive offsides declined in favor of Leonard Fournette’s 9 yard gain. 2nd and 1, no gain by White up the middle stopped by Arthur Maulet. On 3rd and 1, Tom Brady tried his signature QB sneak, but was stuffed for no gain by Tyson Alualu.

Tom Brady stuffed on a sneak. May be first time ever in his career.

On 4th and 1, the Buccaneers go for it and Fournette picks up 7 to convert.

On 1st and 10, Otton called for false start. 1st and 15, a short completion to Fournette for 4 yards. Incomplete on 2nd down, nearly picked by Malik Reed. James Pierre Hurt on the play. Reed could have ended the game there, only got one hand on it slightly behind him. On 3rd and 11, a completion just shy of the sticks by Chris Godwin. Another 4th down attempt for Brady and he completes to Rachaad White for 2 yards. Elijah Riley checked into the game from the practice squad.

Leonard Fournette caught the short pass from Brady on 1st and ran in for the touchdown. Two point attempt coming. The Steelers defense allows their first touchdown of the game with under five minutes remaining.

On the two point attempt, Devin Bush swatted the ball down. No good. 20-18 Steelers. The Steelers still hanging on to a lead with under five minutes remaining.

The Buccaneers have all three timeouts. The Steelers have two. 4:38 remaining.

Najee Harris rushed for 8 yards on 1st down. It would be a huge statement by Najee and this offense to move the chains on the ground and ice out this game. They haven’t shown the ability to do that in years. 2nd and 2, Trubisky fumbled the low snap, so 2nd and short turns into 3rd and long. Awful sequence of events there for the Steelers.

On 3rd and 15, Trubisky finds Chase Claypool for 17 yards in the middle of the field. A huge conversion for the offense.

On 1st and 10, Najee Harris picked up 3 around the right end. Timeout #1 taken by Tampa Bay at 2:20 remaining. Mitch Trubisky tried to pull the handoff to scramble and ran right into a sack. Should have been a penalty called there with a late hit on Trubisky after the sack. Trubisky shows some grit completing a 26 yard pass to Chase Claypool on the next play. Amazing catch by Chase Claypool and another explosive play for this offense.

.@ChaseClaypool with an incredible grab 🤯

This is one of Claypool’s best career games, certainly over the last season or two.

After the stoppage, Trubisky rushed for 3 yards up the middle to get the first. Game over.

1st and 10, Pittsburgh kneels the ball to kill the game.