There have obviously been many issues on offense to date, and today I wanted to look at and provide context to the Pittsburgh Steelers run game on a team and player level through five weeks of the 2022 season. Let’s start with early down rush success rates by team, which is six yards gained or 40% of the needed yardage on first down and 50% of the needed yardage on second down: 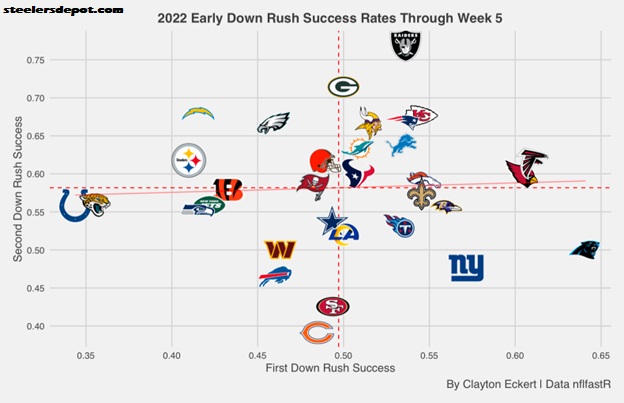 Right away we can see Pittsburgh has struggled on first down, with the 30th rank in the NFL at 41%, very reminiscent to the struggles last season. This is a big factor to the lack of successful drives overall, not able to set up more manageable situations across the board. Encouragingly, he Steelers have fared much better on second down with a 61.8% success rate that ranks tenth in the NFL.

Now let’s look at late down success (gaining the needed yardage for a first down or a touchdown) to see how the NFL has fared through week five: 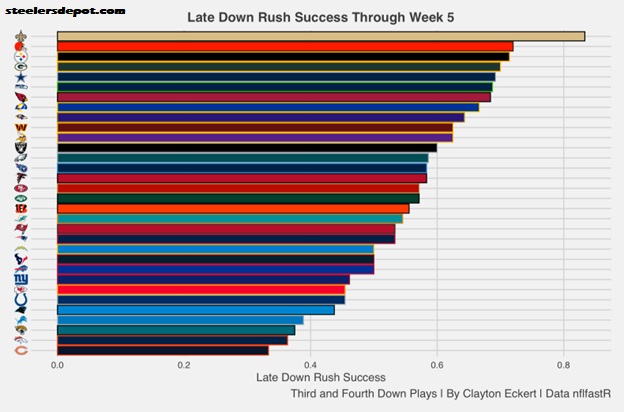 Pittsburgh has an impressive third rank at 71.4%, but very important to note that this is on only five plays, which is the second fewest on the graph. So, looking at the Steelers by down, first down has been the bugaboo, obviously the most common down with the most opportunities. Let’s see how all this looks with the total success rate numbers on all downs for the NFL: 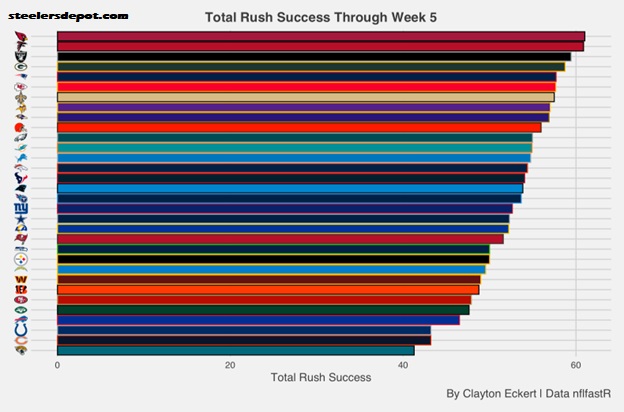 The down-by-down views really gives context to the graph above, with Pittsburgh having a 50% total success rate that ties with Seattle for the 22nd rank in the NFL. The run game has to be better for any hopes of turning around the poor start to the season, with first down being the primary issue that hopefully improves moving forward.

To close, let’s look at the success rates on a player level, sorted by number of plays:

This chart along with the information from earlier complete a good picture of some of the issues that have transpired. Running back Najee Harris obviously has the most attempts (69) by far but has the lowest EPA (-0.2) on his 3.2 average yards gained, which is a far cry from the 8.3 average yards to go on a 46.4% success rate. Really hoping he (and the offensive line) can step up, especially on first down which could prove huge for a hopeful improvement in the entire offense. Fellow running back Jaylen Warren has fared well in his opportunities (19), especially as of late, and has stronger numbers across the board with a 0.1 EPA, 4.9 average yards gained at the same yards to go average as Harris, and a 47.4% success rate. He will likely continue to get more burn moving forward with his strong play, and his opportunities suggest it will be utilized more on later downs. Hopefully this allows Harris to be fresher if this indeed happens, focusing on quality over quantity in hopes of first down improvements.

While the opportunities are much fewer for the remaining players, we see important context to considering all the data above. Right away it’s notable that each have a positive EPA, starting with wide receiver Chase Claypool, who has the third most attempts (seven) with a healthy 6.7 average yards gained, but needing an average of 8.4 yards on his rushes and the lowest success rate of 42.9%. Six of his opportunities came in week one, which is important context to his success rate considering the Bengals were expecting it given the confusing repetition. If his usage is sprinkled in once or twice a game instead, I really think this wrinkle could help on first down and in general to keep defenses on their toes. Fellow wide receiver Diontae Johnson has rushed twice on the season, gaining an average of 5.5 yards and 11 to go, converting one of them, and getting him the ball with his playmaking ability would be smart in my opinion considering early connection issues with Pickett in the pass game. Wide receiver Gunner Olszewski also has two opportunities but was replaced by Steven Sims on the roster due to poor special teams play, and really think we could see the latter used considering his success in the preseason with two attempts and 49 yards including a long 38 yarder. The remaining players have provided a perfect success rate on their limited opportunities. Kenny Pickett has provided refreshing value on quarterback sneaks, aiding the teams’ high late down success number that hopefully continues.

Do you think the run game will improve moving forward, especially on first down? Thanks for reading and let me know your thoughts in the comments!