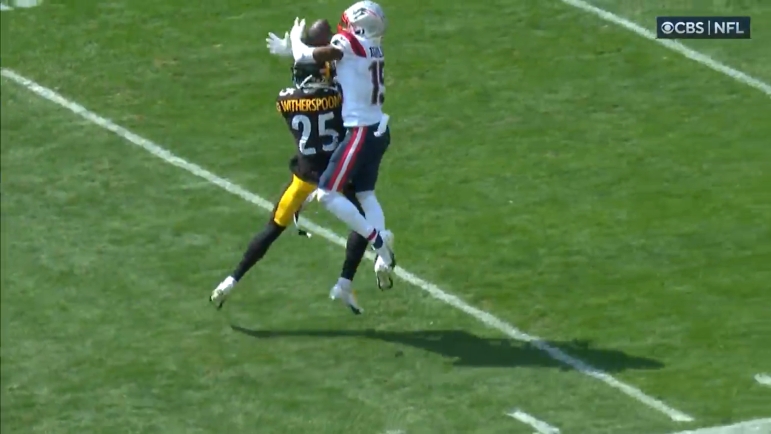 The New England Patriots scored two touchdowns against the Pittsburgh Steelers yesterday. Both of them were avoidable, especially with the one coming off of a drive that began on the 10-yard line following a muffed punt.

Then there was the other one, just before halftime, with Nelson Agholor skying over cornerback Ahkello Witherspoon to snag a ball over his head and race to the end zone with it for a 44-yard touchdown. If one of those two plays don’t happen, this is a different ball game.

#25 Witherspoon was within 2 yards of #15 Agholor for 5.9 consecutive seconds, but failed to break up the pass.#NEvsPIT | #ForeverNE pic.twitter.com/BiM6dXu0Fo

But they did, and so we get the game that we got. I’m sure Witherspoon will be thinking about how he played it differently. He knows he didn’t prepare for how Agholor played the ball, as he told Chris Adamski. “I wasn’t really worried about him elevating because he’s a smaller receiver and he did so and came down with the ball”, he said from the locker room.

Ahkello Witherspoon on the long TD he allowed pic.twitter.com/iHGAerLpBz

A former first-round pick by the Philadelphia Eagles, Agholor was picked up by New England last year—he didn’t do a whole lot then, nor did he offer much in Week 1, but he certainly had an impact yesterday, and he’s been through the ringer enough to have some humility and perspective about it, as reflected in his postgame comments:

I’ll just say that I’ve been on both sides of those. I’ve played eight years and I’ve been on both sides of those where I’ve gone up for it and I haven’t finished it. I think it’s about focus and just being present at the moment when the ball’s in the air. Obviously we’re both aggressive, but if you’re focusing, because it’s a contested catch, and even for the defender’s it’s a contested catch. His job isn’t to catch it, his job is to defend it and my job is to catch it and so I have to have a little bit more focus than him. So that’s where it comes down.

I’m frankly surprised that Witherspoon answered the question the way that he did. While it’s true that Agholor made an excellent play and that, objectively, Witherspoon was in pretty good position relative to the target and the ball, he basically admitted to not giving the receiver enough credit.

After re-signing as a free agent this offseason, the sixth-year veteran is not off to a hot start. He’s already given up a couple of touchdowns, including the would-be game winner in Week 1 if not for a miracle blocked extra point.

The Steelers are going to need better from him moving forward in order for this defense to hold up. The perception still holds that the secondary has three number two cornerbacks and no number one. I’m not seeing that changing in a hurry.