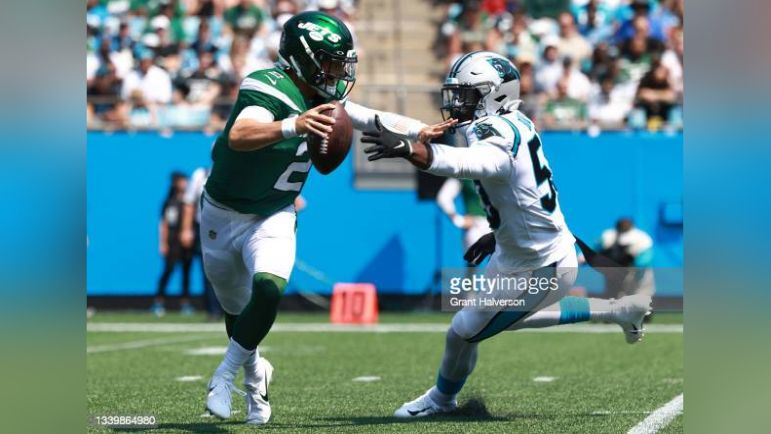 The Pittsburgh Steelers don’t know who they will be facing at quarterback on Sunday when they play the New York Jets, but they may have a good idea by this afternoon. Head coach Robert Saleh said on Monday that they should know “within 24 to 36 hours” whether or not their starter, Zach Wilson would get medical clearance to return to play. There was no news on his status yesterday, leaving today a pretty good bet.

Of course, whether or not he makes that information publicly available is another matter, though practice participation would be telling anyway. As he has for the first three games of the season, Joe Flacco has been taking the first-team reps in practice this week. Flacco went 1-2 in the Jets’ first three games.

Wilson has missed extended time since suffering a right knee injury during the Jets’ preseason opener a month and a half ago. The team did not place him on the Reserve/Injured List, however, at the start of the season, which is why he can potentially play on Sunday against the Steelers rather than being required to miss a fourth game.

The second-overall pick in the 2021 NFL Draft last season, Wilson started 13 games for the Jets as a rookie, going 3-10. He completed only 213 of 383 pass attempts for 2,334 passing yards with nine touchdowns to 11 interceptions with a quarterback rating of 69.7—not so nice.

He did, however, lead the league in sack yardage, accumulating 340 lost yards on 44 sacks taken.

Whether he starts or not, whoever is under center will be playing behind a compromised offensive line, as left tackle George Fant was just placed on the Reserve/Injured List yesterday, and thus will, of course, miss Sunday’s game, along with at least the following three after that.

In a curious schedule quirk, the Jets have already played the Cincinnati Bengals, the Cleveland Browns, and the Baltimore Ravens, and thus will complete their trek through the AFC North in the shortest time possible through the first four games of the year. I’m not sure how often that’s ever happened before, if ever.

The only team the Jets managed to beat out of the three thus far was the Browns, and that took a most improbable of comebacks, scoring two touchdowns in the final two minutes to overcome a 13-point deficit.

Flacco lost to his former team, the Ravens, by a margin of 9-24 in Week 1, and then this past Sunday, was taken down by the Bengals, 12-27. They scored 10 more points against the Browns than they did combined against the Ohio teams. The Steelers will need to keep them closer to the low teens to have a chance to win based on how their own first three weeks have gone.