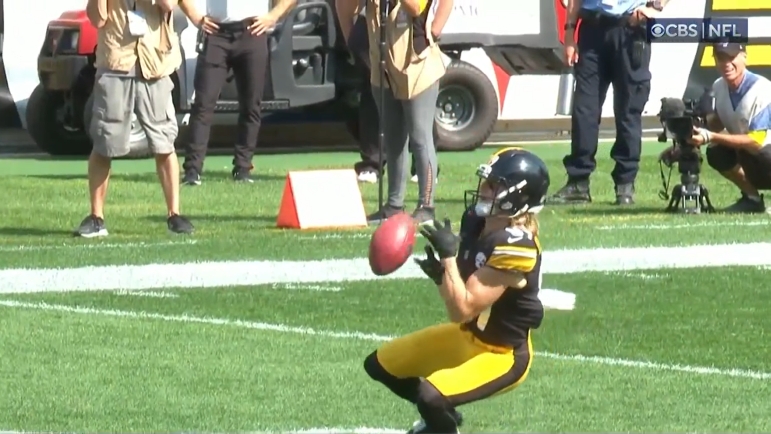 In a one-score game like what transpired Sunday at Acrisure Stadium between the Pittsburgh Steelers and New England Patriots, one play can be the difference.

Turns out, that one play went against the Steelers, and it came on special teams, keying the Patriots to another touchdown a few plays later extending the lead to 17-6, all but putting the game away with how the Steelers offense was playing to that point.

The play in question is, of course, the Gunner Olszewski muffed punt midway through the third quarter. Two plays after a dropped interception by Cameron Sutton, Olszewski muffed the punt from Patriots punter Jake Bailey, leading to a recovery by Brenden Schooler, eventually setting up Damien Harris’ one-yard touchdown run.

Somehow, the Steelers had just 10 players on the field for the punt, resulting in Schooler getting a free run down the field to Olszewski. Calling fair catch, Olszewski was in good position to catch the football and give the Steelers possession. Instead, it bounced off of his facemask right to Schooler.

On the pivotal play, the Steeles had “multiple breakdowns” leading to the negative play for the black and gold.

One of the more unusual parts of a key play Sunday in which Gunner Olszewski muffed a punt and the Patriots’ Brenden Schooler recovered … was that the Steelers didn’t line up anyone opposite Schooler.

Free release … unimpeded run down the field … in position for big recovery pic.twitter.com/lPfozVOJfw

Having 10 guys categorizes as a serious breakdown, especially on a play resulting in a turnover.

“I thought, obviously, the muffed punt when we had 10 guys on the field and gave them the short field was a significant play by them,” Tomlin said to reporters Monday during his weekly media session, according to video via the Steelers’ official YouTube page.

It was a significant play by the Patriots, who dodged a bullet on the dropped interception by Sutton, avoiding a short field for the Steelers by being able to punt the football away and play defense. Instead, the Steelers got in their own way with 10 guys on the field for the punt, leaving Schooler uncovered, which ultimately pressured Olszewski into the muffed punt.

“There is no procedure. We don’t have a launch pad like you do in high school or college,” Tomlin said to reporters, according to video via the Steelers’ official YouTube page. “We got a bunch of professional guys. We expect the 11 professionals to be on the field and there are consequences when they aren’t. Obviously, it’s September and it happened, and we have to absorb the responsibility associated with that.

“We don’t have any unique procedures in terms of head counting and things of that nature. We expect those guys to be on the field and we didn’t have 11 on the field at that time,” Tomlin added. “The return guy counts the bodies and fair catches the ball if we’re short 11. And so we had multiple breakdowns obviously on that play.”

That’s putting it nicely from Tomlin to the media. I’m sure there were some pointed words behind closed doors to the team and to the player responsible for not being on the field in that situation, leading to the gaffe. It was a massive one, one that can’t happen in the NFL.

Breakdowns happen though. Now it’s about cleaning up the mistakes, especially on a short week.