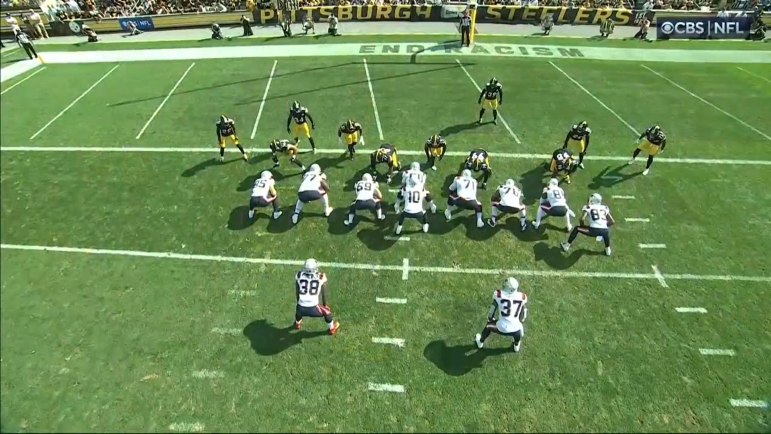 The Pittsburgh Steelers played their first of at least four games without star outside linebacker T.J. Watt today in a losing effort to the New England Patriots. The defense registered zero sacks, which is an incredible rarity for them, a week after generating a league-leading seven in the opener, and the reigning Defensive Player of the Year’s absence was palpable in that regard.

Still, that doesn’t necessarily mean everything was bad. And the coaching staff didn’t just rely exclusively on Malik Reed, Jamir Jones, and Delontae Scott to fill the void. Indeed, they also used a heavy 3-3-5 nickel front with an extra lineman replacing the left edge rusher often in the game, with rookie DeMarvin Leal seeing opportunities in that way, and generally getting linemen on the end.

Head coach Mike Tomlin was asked about those looks after the game, and he explained that the reasons for it were multiple. “They were gonna run the ball”, he said of the New England Patriots offense, via the team’s YouTube channel, “we were down an outside linebacker or two, and so we just felt like that was the appropriate approach to take for multiple reasons”.

The Patriots did pick up 31 rushing attempts during the game, although much of it did come late to close out the final series, and by the end, the day looked better than it began. They finished with 124 rushing yards on those 31 attempts, Damien Harris accounting for 71 yards on 15 attempts and a touchdown. Rhamondre Stevenson added 47 yards on the ground on just nine attempts.

Quarterback Mac Jones’ seven scrambles added only six yards, so taking out the quarterback attempts, the actual, standard run game was more efficient than appearances, accounting for 118 yards on only 24 attempts, nearly five yards per carry.

But again, much of that came late in the game, with the earlier run defense aspiring to something a bit more efficient. One can’t help but wonder if fatigue played an issue. The Steelers’ offense was actually able to control the ball in the first half, but their failure to sustain drives in the second flipped the time of possession decidedly back New England’s way.

As good as this defense can be, even without Watt available for a stretch, they quite simply are going to need to get more help from the offense to help keep their snaps down. The offense went three and out on half of its four drives in the second half. Yet they had one excellent nine-play, 75-yard, 2:49-minute touchdown drive.

The bottom line is the Patriots controlled the football for nearly 13 minutes in the fourth quarter. Trying to accommodate for the absence of Watt under those circumstances while experimenting with different replacement packages was not going to work in their favor.