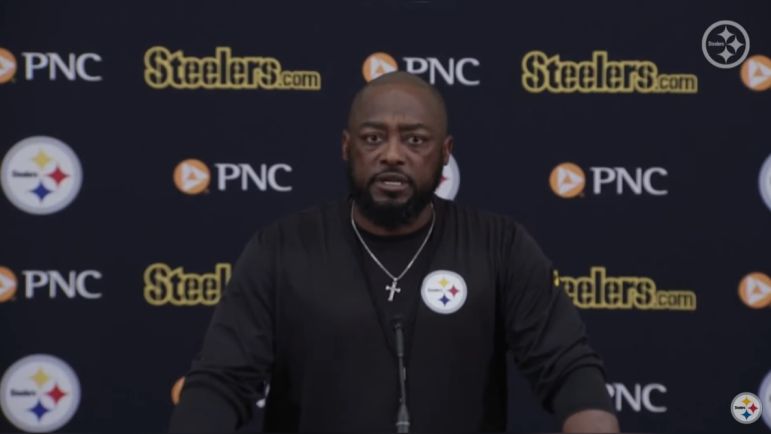 Through two games, the top topic about the Pittsburgh Steelers’ offense is a lack of aggression. Not enough vertical shots, too many short throws in an offense that is anything but a well-oiled machine. Speaking with reporters during a Monday press conference via the team’s YouTube channel, Mike Tomlin said QB Mitch Trubisky and the Steelers’ offense as a whole can be more aggressive.

“I think he could,” Tomlin said when asked if Trubisky could be more aggressive. “And we could.”

On the season, Trubisky is averaging just 5.1 yards per attempt. Of the 33 qualified quarterbacks, that number is 32nd, only ahead of Dallas’ Dak Prescott, who played in just one game before suffering an injury. The gap between Trubisky and others is noticeable. Sitting in 31st place is Houston’s Davis Mills at 5.6 yards per attempt, a wide gap between 31st and 32nd place. All of that is to say the Steelers, like last year, have been focused on throwing the ball short as opposed to pushing the ball downfield.

“We’ve got long ball shots drawn up in a lot of things and sometimes it’s just whether or not we get the appropriate look or we like the match up within the look.”

Nowhere is the Steelers lack of aggression more evident than with WR Diontae Johnson. The team’s best offensive player, he’s been stuck making underneath catches. Over his last seven games, he’s racked up 44 receptions but for barely more than seven yards per catch. Two games into 2022, he’s averaging only 8.6 yards per catch, a number far lower than it should be. Over his career, Johnson has 267 receptions at a 10.8 yard average. Since 2010, he’s one of just five receivers with 250+ catches and under 11 yards per catch.

He joins a list of mostly slot receivers. Primarily, Johnson is an outside “X” receiver who should be making more plays downfield.

For this Steelers’ offense to get going, they will need chunk plays. As the Patriots showed, their ability to generate big plays, chiefly Nelson Agholor’s 44-yard touchdown at the end of the first half, made up for their otherwise lackluster passing performance. Splash plays mask plenty of issues and don’t require offenses to go on perfect, rhythmic ten-play drives. This current Steelers’ offense certainly isn’t capable of reliably doing so. The alternative is to win with the big play, a mission that’ll need to start Thursday night against the Cleveland Browns.