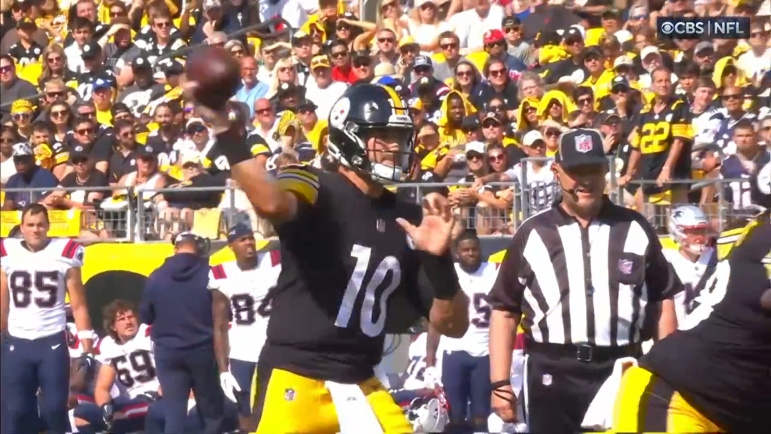 On Tuesday, QB Mitch Trubisky spoke to the media prior to practice and was asked about being conservative and if taking care of the football take precedent over being aggressive in taking shots downfield. Trubisky responded that it’s important to have an aggressive mindset as a quarterback, but also not try to press too much to make a mistake that could hurt the team.

Tomlin’s big point of choosing Trubisky to be the starting quarterback was his intangibles as a leader as well as his experience and ability to take care of the football. Through three preseason games and the team’s first regular season game, Trubisky took care of the football well. However, that streak came to an end Sunday when he threw an INT on a tipped pass over the middle of the field that was caught by Jalen Mills. On the play, Trubisky forced the ball where it shouldn’t go with a defender sitting right in the area he was trying to go to, having Mack Wilson tip the pass that was intended for Diontae Johnson.

‘Should Not Have Done That:’ Trubisky Explains Bad Decision On INT https://t.co/wdbSDVQ9Ih #Steelers pic.twitter.com/PLoqdneFHj

Trubisky has mentioned in the past that he must be aggressive in attacking downfield and give his receivers a chance to make plays. Still, he has yet to find that balance of taking shots down the field but also making sound decisions and take care of the football. He has been more conservative than aggressive as the veteran is only averaging 5.1 YPA through two games this season. The offense desperately needs to stretch the field more to open up plays underneath, whether it be the short passing game or establishing the run.

Ultimately, it all comes down to Trubisky making sound decisions quicker, processing whether it would be advantageous to take a shot or check it down. While Canada may have most of the control on the play call, Trubisky is “the man in the arena” and is the one that must make the decisions. Thus, him stating that he needs to walk a fine line being aggressive yet protect the football is true, but he needs to be better at making those decisions more consistently if the offense is to see notable improvement in the near future.