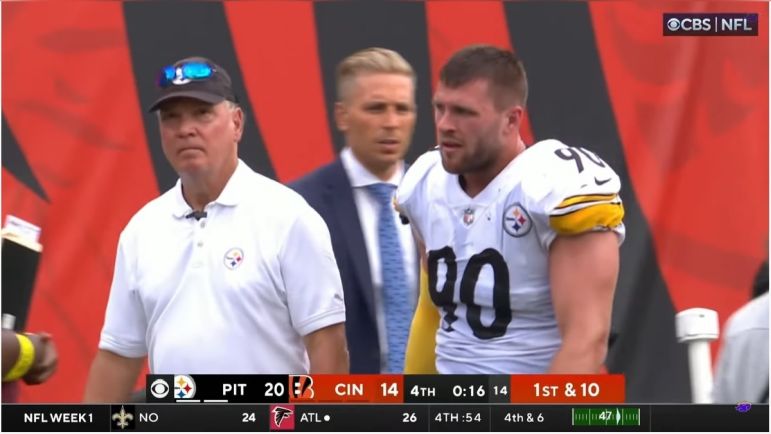 Late in an absolutely insane battle in Cincinnati, TJ Watt came out of the game pointing to his left upper chest and many fans interpreted the video as him saying “I tore it.” He did not stop on the sideline and instead headed straight to the locker room…never a good sign when a player leaves the field with an injury.

Here is the play with 22 seconds left in regulation:

In his post-game press conference, Head Coach Mike Tomlin described this issue as an upper body injury. After the game, Adam Schefter reported that Watt was dealing with a pectoralis muscle injury:

Steelers believe TJ Watt tore his pec and he is scheduled to undergo scans Monday to confirm diagnosis, per source.

While a pectoral muscle injury is not an emergency that would require a hospital visit, it is mildly encouraging that he was reportedly not in serious pain after the game according the Chris Adamski:

Try this again without typos!

If it’s worth anything, TJ Watt was in the postgame locker room and showered and getting dressed, not appearing in acute severe pain or anything, chatting with people. At least he’s not on a hospital or in need of constant medical attention

We have seen pectoralis injuries that are season ending for many players, including Steelers defensive linemen Cam Heyward, who sustained this injury in November 2016 and came back better than ever the following year (and just keeps balling out), and Stephon Tuitt, who was having his best season ever in 2019 until his pectoralis injury required season-ending surgery and also returned to a huge season in 2020. On the flip side, quarterback Ben Roethlisberger suffered a pec injury last season and did not miss a game. Safety Miles Killebrew sustained a pectoralis injury early in training camp this year and returned to the team late in the preseason in time to be voted as a Special Teams captain and play in the Week 1 game.

So what is a pec injury? And what makes the difference between returning or needing season-ending surgery?

First, a quick anatomy review. The pectoralis major muscle, more commonly known as the “pec,” is a large muscle located on the anterior chest wall. This broad muscle originates at the clavicle (collarbone), the sternum (breastbone), the ribs, and an extension of the upper part of the external oblique abdominal muscle. The muscle fibers extend across the chest and attach to the upper humerus via the pectoralis tendon. It plays an important role in shoulder function by providing internal rotation (rotating the joint toward the body) and adduction (bringing the arm towards the body). The pectoralis minor is a much smaller muscle which lays behind the pec major, arising from the ribs and inserting into the scapula (shoulder blade) and helps to pull the shoulder forward and downward. 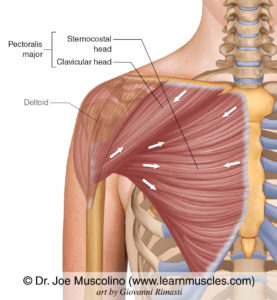 The bruising and swelling that occurs after a pec injury can be pretty impressive, as WWE fans saw with Cody Rhodes in June: In a review of pectoralis muscle injuries sustained by NFL players from 1998-2020, 258 injuries were identified. The breakdown of severity shows that Grades 1 and 3 are most common:

As prior studies have shown, most pec injuries occurred in defensive players (64.7%) with 26.3% of all injuries sustained by defensive backs. A total of 45% of injuries were treated non-operatively with 48.8% requiring surgical repair and 6.2% unknown. The reviewers also found that a slightly larger proportion of defensive players (52.2%) avoided surgery compared to offensive players (48.3%).

There isn’t any reliable data regarding return to play for pectoralis muscle injuries treated non-operatively but many players have made it back in the same season. While a majority of players undergoing surgical repair don’t make it back until the following season, it is possible that TJ Watt could still salvage his 2022 campaign. One example that’s close to home for the reigning DPOY is his brother, JJ Watt, who sustained a pec injury in Week 8 of the 2019 season. He had surgery two days later and managed to return to practice in late December, eight weeks after surgery. JJ took the field with his fellow Texans for the Divisional Round game less than two weeks after resuming practice.

Here is a video from Dr. Brian Sutterer explaining pectoral injuries. While he was wrong about JJ not returning that season, he does a great job on the rest.

TJ Watt will certainly be undergoing an MRI once he returns to Pittsburgh to assess the severity of the injury. Given his importance to the team, it is a good bet that we will get an update from an NFL insider even before Tomlin meets the media on Tuesday. Check back for further detail once we know more about whether TJ will require surgery.