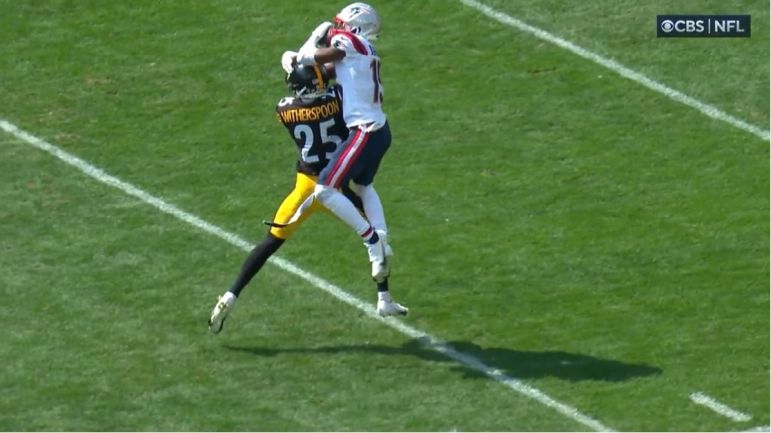 Winners and losers from the Pittsburgh Steelers 17-14 loss against the New England Patriots in Sunday afternoon’s home opener.

Minkah Fitzpatrick – Fitzpatrick’s big start to the season continues with his second interception in as many weeks. Cover 2 and covering the deep half, he read Mac Jones’ eyes and took advantage of a floater to the middle of the field, leaping and intercepting the pass. He now has as many picks this year as he did all of last year. Teams are going to figure out they can’t throw in his area. Of course, he seemingly covers the entire back half of the field at all times.

Steelers’ Defensive Coaching Staff – There’s always things for the Steelers’ defense to correct, there’s also a lot on their shoulder, but the coaching staff of Teryl Austin, Brian Flores, and others created a good gameplan today. Even in a loss, I can’t wait to break down the Fitzpatrick INT and the incredible scheme the Steelers ran to create a free rush and the 3-3-5 they leaned on was an important wrinkle to utilize their deep defensive line.

Alex Highsmith – Pittsburgh’s pass rush was anemic today but Highsmith provided what little there was. He pressured Jones on the Fitzpatrick INT and showed great hustle to chase Jones down all day. He’ll have to play this well going forward but even then, the Steelers clearly have challenges getting to the quarterback without T.J. Watt.

DeMarvin Leal – Leal wore plenty of hats today One way Pittsburgh tried to compensate for losing Watt was opening up and running a ton of their 3-3-5 defense, which they flashed last week. Often, it was Leal out on the edge at LDE/LOLB. He batted down a screen and handled the new role reasonably well.

Pressley Harvin III – Harvin got things started with the best punt of his career, a 69-yarder that nearly resulted in a Steelers’ score, though the NFL’s quirky rulebook had it end in an anticlimactic touchback. Later, he had a 53-yarder beautifully placed along the sideline, though the coverage was poor, Miles Boykin overran it, and the net yardage was underwhelming. A 39-yard 4th quarter punt was equally disappointing. Still, a nice performance from him and a better one than what he did in Week One.

Chris Boswell – A late addition to the list that should’ve been included on here. Dude is just money from 50+ yards out and was again today. Makes 50 yarders in this stadium look easy.

Mitch Trubisky – This offense has a lot of issues. But you can’t ignore the quarterback as being one of them. Matt Canada’s offense still feels clunky but Trubisky isn’t helping. He struggled to see the field well, especially over the middle, and his first INT of the year was a total non-read, never seeing LB Mack Wilson, who tipped the ball into the air to be picked off by DB Jalen Mills. Trubisky made too-tight window throws and struggled to drive the ball off his front foot, especially on sideline throws (though his overall velocity/arm strength is good and he got the ball there). He took too many sacks, not throwing the ball away and trying to do too much and while he led a solid late third/early fourth quarter drive, Trubisky in his best moments looks average and in his worse, looks like a career backup. He finished the day with just 168 yards and averaging just over five yards per attempt.

Ahkello Witherspoon – Witherspoon needs to be the Steelers’ #1 cover corner. His play at the end of the half was anything but. In good position on a go-ball for WR Nelson Agholor, Witherspoon withered at the end and didn’t play the ball. Didn’t leave his feet and allowed Agholor to “Moss” him over the top for the score. In a game where TDs where premium, that was a backbreaker. It’s been a below average start to the season for him.

Pass Rush – There was no question the Steelers pass rush was going to suffer without Watt. And it was an issue today. After sacking Joe Burrow seven times in the opener, they struggled to get to Mac Jones today. It required ultra-creative scheme and sending numbers to get to him. The Pats could pay attention to Cam Heyward and give rookie LG Cole Strange more help and Pittsburgh couldn’t play the same game they want to.

Jones was not sacked Sunday and hit only three times.

Gunner Olszewski – A layup here. Shouldn’t forget about Cam Sutton’s dropped interception two plays before Olszewski’s muff but return men can’t fumble the ball. Ever. Olszewski did and it cost the Steelers dearly, setting up a short Damien Harris touchdown and taking the game from 10-6 to 17-6. Pittsburgh played catch-up the rest of the way. He’ll likely get a chance to redeem himself but there’s no margin for error going forward.

First Down Offense – I’ll have to pull the numbers but the first down offense specifically seemed pour in this game and had the Steelers chasing safe second down calls just to get into manageable situations. Third down offense was a lot better but Pittsburgh still has to be more aggressive and effective early so they’re not always in 3rd and 4.

Matt Canada – The All-22 will crystalize things more but it didn’t feel like a well-called game today. Issues with execution, no doubt, and at least Canada didn’t run on 2nd and long like he did last year, but the Steelers’ safe offense ended in middling results (and that’s being kind). Passes weren’t distributed well in the first half, there seems to be more communication errors that aren’t just Week One road-game mistakes. This offense has two touchdowns in two games and you don’t need me to tell you that’s not good enough. It’s like a baseball team with a great pitching staff and no run support. They are the New York Mets. The defense is Jacob DeGrom. The rest of the team is…the rest of the Mets.