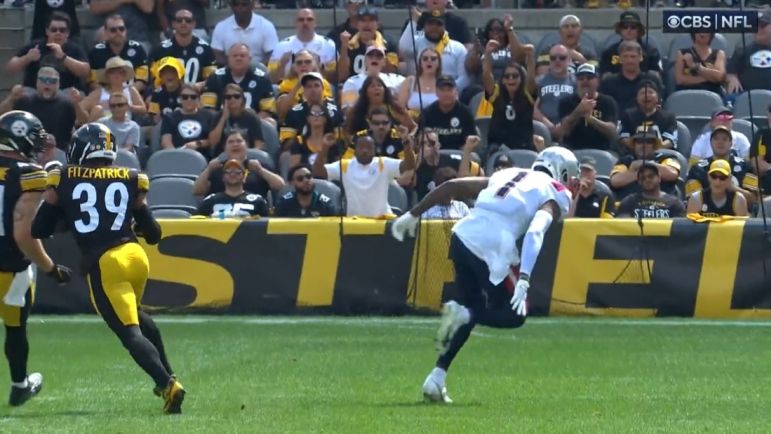 The Pittsburgh Steelers 2022 Week 2 matchup was their home opener at Acrisure Stadium against the New England Patriots but they couldn’t bring home the win, as Pittsburgh’s offense struggled all game in a 17-14 loss.

Pittsburgh started with the ball after the Patriots won the toss and chose to defer. They went three-and-out on their opening drive after QB Mitch Trubisky was incomplete to TE Pat Freiermuth on 3rd and 4. After P Pressley Harvin III boomed a 69-yard punt, Myles Bryant fumbled the punt but never fully possessed it and was awarded a touchback after picking it up in the endzone.

New England picked up a first down on a completion to WR Jakobi Meyers from QB Mac Jones on 3rd and 7. Back-to-back 16-yard completions set up New England in Steelers territory at the Pittsburgh 31. Later in the drive, New England faced a 3rd and 13 from the Pittsburgh 20 after a delay of game penalty and the Steelers defense forced a stop. The Patriots sent out Nick Folk for a 28-yard field goal and he hit it to put New England up 3-0 with 6:42 left in the first quarter.

Pittsburgh followed up their opening drive three-and-out with what appeared to be a third-down conversion on a reception by WR Diontae Johnson but the initial call on the field was a fumble that the Patriots took back for a touchdown. After review, it was ruled correctly that Johnson was down and Pittsburgh picked up a first down. On 3rd and 1 from the New England 44, FB Derek Watt picked up the first down on a short run. The next play though, Trubisky was intercepted by CB Jalen Mills off a ball that was tipped by LB Mack Wilson. New England took over at their own 39.

The Patriots turned the ball right back over, when on 3rd and 5, Jones threw deep and was picked off by S Minkah Fitzpatrick, who returned it to the Pittsburgh 34. After a first down completion to Johnson, Trubisky was sacked by DL Christian Barmore to put the Steelers at the New England 47. On 3rd and 17, Trubisky hit Johnson right at the first down marker and they gave him the first down. A nice effort by RB Najee Harris on 3rd and 1 helped the Steelers gain another first down. A delay of game penalty right after set Pittsburgh back five yards. After an 11-yard completion to WR Chase Claypool, the Steelers were facing 3rd and 4 from inside the red zone. Trubisky was sacked by LB Jahlani Tavai, and K Chris Boswell was sent out and hit a 36-yard field goal. Pittsburgh tied the game at 3-3 with 8:35 left. The 16-play, 48-yard drive lasted 7:07.

A holding penalty against New England on 3rd and 16 set up a 3rd and 26. Jones found Meyers for 24 yards, but it wasn’t enough for the first down and the Patriots had to punt. Jake Bailey’s boot went into the end zone for a touchback.

Pittsburgh converted on 3rd and 3 to keep their drive alive on a five-yard reception to Claypool. A pass to TE Pat Freiermuth on 3rd and 7 hit off his helmet after nice coverage by S Kyle Dugger to force a punt. Harvin sent it 55 yards, but Bryant returned it 16 yards to the New England 26, which is where the Patriots set up shop for their next drive with 3:08 left in the first half.

The Patriots picked up two first downs and moved to their own 49 after the two-minute warning. On 3rd and 3 with 22 seconds left in the half, Jones went deep down the right sideline to WR Nelson Agholor and he made an impressive catch over CB Ahkello Witherspoon for a 44-yard touchdown. Nick Folk’s extra point made it 10-3 Patriots.

Pittsburgh tried to answer back, and Trubisky found WR George Pickens for a 23-yard gain on first down. After an incompletion to Johnson, Trubisky held onto the ball way too long and was sacked by OLB Matthew Judon. With three seconds left in the half, the Steelers had to chuck up a hail mary and it was incomplete. The half ended with a 10-3 New England lead.

The Patriots got the ball to start the second half, and quickly picked up a first down on a 10-yard completion to WR Kendrick Bourne on 2nd and 5. After moving into Pittsburgh territory, New England faced a 3rd and 7, and RB Rhamondre Stevenson picked it up on a draw play. After a false start knocked New England back, they couldn’t convert another first down as Jones was incomplete on 3rd and 8. Nick Folk was sent out for a 52-yard field goal try and he was no good. Pittsburgh would take over at their own 42.

The Steelers got right to work with 13 yards and a first down on a dump-off to Harris. Another first-down reception by Johnson was followed by an incompletion and a gain of two, and the Steelers faced 3rd and 8. Trubisky dumped it off to RB Jaylen Warren on 3rd down, and Chris Boswell came out and nailed a 52-yard field goal. New England still held on to a 10-6 lead with 5:44 left in the third quarter.

On the first play of the Patriots’ drive, Agholor gained 25 yards to move the Patriots to their own 42. On 2nd and 9 later in the drive, Cam Sutton dropped an interception but the Patriots couldn’t take advantage with a third down conversion and they punted. However, the punt by Jake Bailey was muffed by former Patriot Gunner Olszewski and recovered by the Patriots. Connor Heyward was flagged for unnecessary roughness after the play, and New England had 1st and Goal. On 3rd and Goal with the game feeling like it was on the line, RB Damien Harris scored and the Patriots went up 17-6 after Folk’s made extra point. The Olszewski turnover and dropped interception came back to bite the Steelers as they went down two scores with 2:47 left in the 3rd quarter.

The Steelers moved the ball with a first down completion to Harris to open the drive, and two plays later Olszewski ran for 18 yards and a first down. Two plays later, Harris picked up another first down and the Pittsburgh offense finally had life. Trubisky hit Johnson for 13 yards and a first down. On the last play of the third quarter, RB Jaylen Warren gained three yards to set up a 3rd and 4 from the New England 8. On third down, Trubisky threw a touchdown pass to Freiermuth to trim the New England lead to 17-12. The offense stayed on the field to go for two and an impressive catch by Johnson led to a conversion. With 14:58 left in the game, the Steelers finally had life, though they still trailed 17-14.

New England’s next drive would start on their own 28 after a 26-yard return by Pierre Strong. On 3rd and 9 from the New England 40, Jones hit Meyers for 15 yards and a first down. A few plays later on 3rd and 5, Jones was incomplete to the sideline to DeVante Parker, and Jake Bailey had to punt. The punt was downed at the Pittsburgh 11 after the 29-yard punt.

With 10:49 left, the Steelers had an opportunity to tie the game or take the lead. Instead, they went three-and-out and had to punt. Harvin’s punt travelled just 40 yards, and the Patriots would start with the ball at midfield. On 3rd and 2, Jones was incomplete to TE Jonnu Smith and the Patriots punted. Bailey’s punt went into the end zone for a touchback.

Harris ran for five yards on first down, and a three-yard completion on second down set up 3rd and 2. On 3rd and 2, Trubisky was incomplete to Harris on a wheel route and the Steelers failed to take advantage yet again. Harvin’s punt would go 43 yards and the Patriots started their next drive at their own 30. A holding penalty brought the Patriots back, but on 2nd and 13, Jones connected with Lil’Jordan Humphrey for 11 yards. A 3rd and 2 from the New England 38 was converted on a scramble by Jones, and New England had a new set of downs as the clock ticked to under four minutes.

The Patriots’ run game took over, with consecutive gains of 6, 8 and 16 yards right before the two-minute warning. After a loss of two on first down, the Patriots picked up 9 and 5 yards and got the first down to clinch a win.

With the loss, the Steelers fall to 1-1. They’ll look to get back over .500 on Thursday Night in Cleveland when they take on the 1-1 Browns.