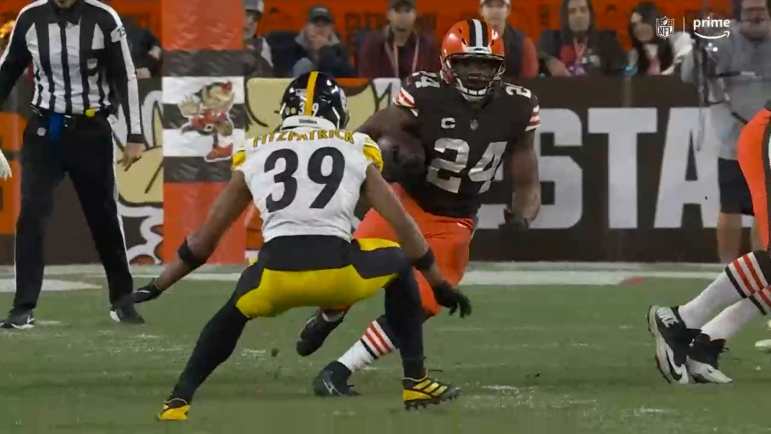 The Pittsburgh Steelers headed to Cleveland on a short week to try and rebound from their Week 2 loss to the New England Patriots but they couldn’t do so, losing 29-17 on Thursday Night Football.

Cleveland opened with possession after they won the toss and chose to receive. RB Nick Chubb had a 13-yard first down run on their second play of the drive, but it was the only first down the Browns would get. After a 3rd and 10 incompleted by QB Jacoby Brissett, the Browns punted away. P Corey Bojorquez’s punt went for a touchback.

Pittsburgh’s opening offensive play was a first down completion to WR Diontae Johnson on a rollout pass from QB Mitch Trubisky. Back-to-back short runs by RB Najee Harris set up a 3rd and 5, and Trubisky went deep for Johnson but it was broken up by CB Denzel Ward. Pittsburgh had to punt. Pressley Harvin III’s punt went 39 yards to the Cleveland 23, where they took over.

On 3rd and 6, OLB Alex Highsmith jumped offsides, but it didn’t end up mattering because DL Larry Ogunjobi got to Brissett for a sack and the Browns went three-and-out. Bojorquez’s punt got tipped by S Miles Killebrew and it led to it just going 25 yards to the Cleveland 48, so Pittsburgh’s second drive would start in plus territory.

Harris for ten yards and a first down on the first play of the drive, but on 2nd and 6, the attempt to get George Pickens more involved didn’t go well as he lost two yards after a reception on a screen. Pittsburgh went no-huddle, but they couldn’t pick up the first after a short completion to Harris. K Chris Boswell came out for a 50-yard try and in windy conditions, his kick pushed right and the game stayed 0-0.

Cleveland took over at their own 40, and on 3rd and 9, Brissett’s completion to TE David Njoku was just short of a first down, and on 4th and inches, Brissett easily picked it up himself on a QB sneak. On the next play, Chubb broke off a 36-yard run to put Cleveland in the red zone. Two plays later, WR Amari Cooper caught an 11-yard touchdown. Cade York’s extra point put the Browns up 7-0 with 2:54 left in the first quarter.

Cleveland’s kickoff was a touchback, and the Steelers had a first down on their second play of the drive. After that first down completion to Johnson, RB Jaylen Warren ran for seven yards. A downfield pass to Pickens was complete after he made an incredible catch for 36 yards.

Six and seven-yard runs to Warren on back-to-back plays gave the Steelers a 1st and Goal as the second quarter came along. A Najee Harris touchdown run on first down went for a touchdown. Boswell’s extra point was good, and the Steelers tied the game at 7-7 with 14:55 left in the first half.

Cleveland’s first drive of the second quarter started on their own 21. An illegal touching on second down took a big play by Cooper off the board. Cleveland still converted on 3rd and 2 on a pass to Njoku that went for 13 yards. On 3rd and 9 later in the drive, Brissett hit WR Donovan Peoples-Jones for a first down. The team ran a trick play on their next snap, and RB Kareem Hunt was able to pick up enough for another first down. The Browns passing game started to get cooking, as Brissett then hit Cooper for 17 yards at the Pittsburgh 21. A 3rd and 3 first down pickup by Hunt gave Cleveland a 1st and Goal, and the next play they captialized with a touchdown pass to Njoku. The 9-play, 71-yard drive ended with a Cade York missed extra point and the Browns took a 13-7 lead with 8:58 to go in the first half.

Pittsburgh quickly got into Cleveland territory, as a 16-yard completion to Johnson on the third play of the drive put the Steelers at the Cleveland 48. A 17-yard run by Jaylen Warren went for a first down two plays later, but he fumbled at the end of the play, although Johnson was there to fall on it. Another end-around by WR Chase Claypool two plays later went for 11 yards and was followed by a 10-yard carry by Harris to put the Steelers inside the 5. A Trubisky read option keeper on second down was run in for a touchdown, and Boswell knocked through the extra point so the Steelers took a 14-13 lead with 3:50 left in the first half.

The Browns drive started on their 12-yard line, but a 19-yard completion to Njoku on 2nd down followed by a a 10-yard completion to Njoku on the next play set Cleveland up with the ball on their own 47. On the first play out of the two-minute warning, Hunt picked up 11 yards and another first down. On 4th and 2 from the Pittsburgh 31, Brissett seemingly hit Cooper for the first down, but upon review, it was overturned and the Steelers took over. With 30 seconds left in the half, the Steelers would have a chance to extend their lead.

On first down, defensive holding gave the Steelers five yards, and on the next play Trubisky rolled to his left and found Claypool for 20 yards and a first down at the Cleveland 43. Back-to-back incompletions left the Steelers with six seconds and no timeouts left, but in the wind, the Steelers weren’t going to attempt a 61-yard field goal. Trubisky’s final throw of the half was incomplete, and at the half, the Steelers led 14-13.

The Steelers got the ball to open the second half and would start at their own 16-yard line after an 18-yard return by WR Gunner Olszewski. On 3rd and 9, Pittsburgh converted a first down on a completion to Claypool, and on the ensuing first down, Diontae Johnson dropped a screen pass but the Browns were flagged for too many men on the field and the Steelers got a first down.

A shovel pass to Jaylen Warren that originally went for 35 yards was taken off due to an ineligible man downfield, and on 3rd and 5, Chase Claypool was flagged for offensive pass interference and the Steelers brought out Harvin to punt. After taking a delay of game penalty, Harvin’s second punt of the night was fair caught at the Cleveland 14. With 9:33 left in the 3rd quarter, Cleveland had their first possession of the second half.

On 2nd and 9, Brissett and Cooper hooked up again and Cooper was able to gain 28 yards. The next play, Cleveland went back to Njoku who picked up another first down and moved into Pittsburgh territory. The Steelers forced Cleveland into another 4th down, but they converted again with a nine-yard run by Hunt. On 3rd and 1 a few plays later, Brissett converted another QB sneak for a first down to the Pittsburgh 16. Facing 3rd and 10 from the 16, Brissett was incomplete to Hunt and Cade York came out for his first field goal try of the game. He was good from 34, and the Browns took a 16-14 lead with 2:31 left.

The Steelers went three-and-out on their next drive after a drop by WR Diontae Johnson ended the drive. Harvin’s punt travelled 48 yards and was downed at the Cleveland 20.

With Ahekello Witherspoon out of the game due to a hamstring injury, the Browns went deep to Cooper on 3rd and 1, and he made a catch downfield for 32 yards to move Cleveland to the Pittsburgh 39. The Browns run game got going with consecutive gains of 16 and 8 yards. Another QB sneak conversion by Brissett on 3rd and inches brought the Browns to the Pittsburgh 8 and gave them a 1st and Goal. On 3rd and Goal from just outside the 1, Hunt was stopped short of the end zone and the Browns had a decision to make on 4th and Goal. The browns went for it, and Nick Chubb went over the top for a touchdown. With York’s extra point, the Browns took a two-score lead at 23-14.

Down two scores with 9:29 left to play, the Steelers had to put together a scoring drive. On 3rd and 10, Kevin Dotson was flagged for a false start. Just ⅙ on 3rd down for the night, the Steelers couldn’t convert on 3rd-and-15 as Trubisky’s pass sailed over the head of TE Pat Freiermuth. A 37-second three-and-out for Pittsburgh’s second in the row was not what the doctor ordered for a tired defense. The Browns would take over with 8:32 left at their own 39.

A second-down completion to Njoku was good for eight yards and a first down. OLB Alex Highsmith had a nice run stop later in the drive, and Cleveland was looking at 3rd and 12 with under six minutes left in the game. On 3rd down, Brissett threw a nice pass to Cooper but he dropped it and Cleveland had to punt. Pittsburgh held onto a sliver of a chance with 5:40 left to play. Bojorquez’s punt pinned the Steelers at their 5-yard line, so they would need to go 95 yards to score a touchdown.

A seven-yard completion on first down set Pittsburgh up with a manageable opportunity to get a first down, but they weren’t able to. Trubisky’s pass to Johnson was underthrown on second down, and Trubisky took a sack on third down. Deep in their own territory, the Steelers chose to punt and the game was effectively decided.

Cleveland went three-and-out after a Highsmith sack on third down, but with the clock ticking, the Steelers chances seemed as slim as ever.

With 3:13 left in the game, the Steelers, who couldn’t buy a first down, would take over at their own 20. They did manage to pick one up on first down, and on second down, Freiermuth made his first catch of the game for 26 yards down the middle of the field. He had a 20 yard gain on the next play, and Pittsburgh was quickly in Cleveland territory. On 1st down from the Cleveland 26, Trubisky went to Pickens in the end zone but the pass was incomplete. He went back to Pickens who couldn’t get out of bounds, and the Steelers were able to get a play off before the two-minute warning.

They weren’t able to get set though, and penalties offset after a defensive pass interference against the Browns. With 1:57 left, the Steelers had another 3rd and 5 try. Trubisky was incomplete to Freiermuth, and needing two scores, the Steelers brought out Boswell to try and make it a one-possesion game. The Browns had 12 men on the field, and the Steelers had a closer field goal try. Boswell was good from 34, but the Browns still led 23-17 with 1:48 to go.

Down 6 with 1:48 and one timeout left, the Steelers tried an onside kick, but Pickens went offsides and the Browns took over. On 3rd and 1, Chubb was just short of the line to gain. There was a 10-second run off down to 40 seconds, and on 4th and inches, the Browns brought their punt team out with 14 seconds to go. Bojorquez got a punt off cleanly to pin the Steelers at their 4-yard line. With 9 seconds, the Steelers had to go 96 yards to win. The Steelers ran the pass and lateral play, and the Browns recovered a fumble in the end zone to win 29-17.

With the loss, the Steelers fall to 1-2 while the Browns improve to 2-1. Pittsburgh has 10 days to prepare for their second home game of the season in Week 4 against the New York Jets.