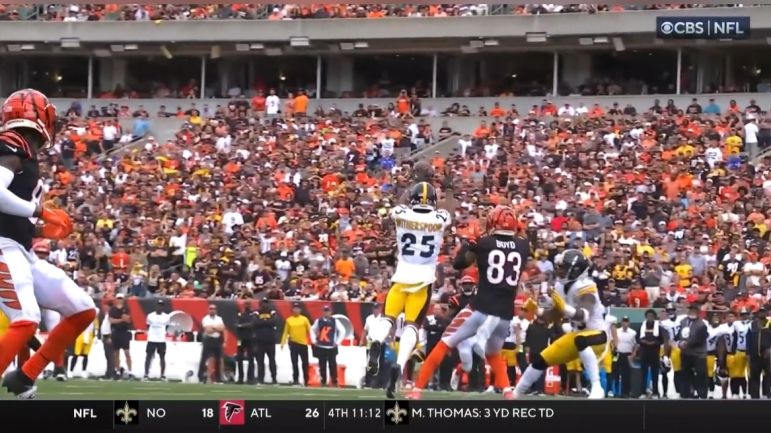 It wasn’t pretty by any stretch of the imagination, but the Pittsburgh Steelers did exactly what they needed to do Sunday at Paycor Stadium, picking up the all-important win in AFC North play over the Cincinnati Bengals, showing the NFL that thy can compete with high-level teams.

That performance Sunday caused the Steelers to rise two spots in the NFL.com Power Rankings ahead of Week 2, compiled by NFL analyst Dan Hanzus, putting the Steelers inside the top 20 in the NFL.

Though the power rankings don’t mean much at all in the end, it’s good to see the Steelers getting the type of respect they deserve after a big Week 1 win behind a dominant defensive performance.

After opening the season at No. 21 in Hanzus’ power rankings, the Steelers climbed to No. 19 after the win over Cincinnati.

“Let’s start with the positives: The Steelers forced Joe Burrow into five turnovers, the front seven piled up six sacks and Chris Boswell’s long field goal secured an overtime win over the defending AFC champion Bengals in one of the craziest season openers in recent history,” Hanzus writes regarding the Steelers’ ranking at No. 19 overall. “The negatives are ominous, however: The offense was largely stagnant under Mitch Trubisky, Najee Harris exited the game with a foot injury and reigning Defensive Player of the Year T.J. Watt could be out for six weeks after suffering a pectoral injury in the final seconds of regulation. Sometimes even the most dramatic of wins can feel like a loss.”

Now that we’re a few days removed from the win and the early returns on the injuries to Harris and Watt are much more positive than previously believed coming out of Sunday’s game, it’s hard not to feel relatively good about the win and the outlook for the Steelers.

It was a crazy back-and-forth game that featured some absolutely absurd swings within the game, featuring missed field goals, turnovers, catches, and more. The fact that the Steelers came out on top after it all makes it all the better for the black and gold, as they added an all-important win in the win column, not only in the AFC, but in AFC North play as well.

Up next for the Steelers is the New England Patriots Sunday at 1 p.m. at Acrisure Stadium, presenting another opportunity for the Steelers to stack a conference win and keep climbing in the NFL power rankings for Hanzus.