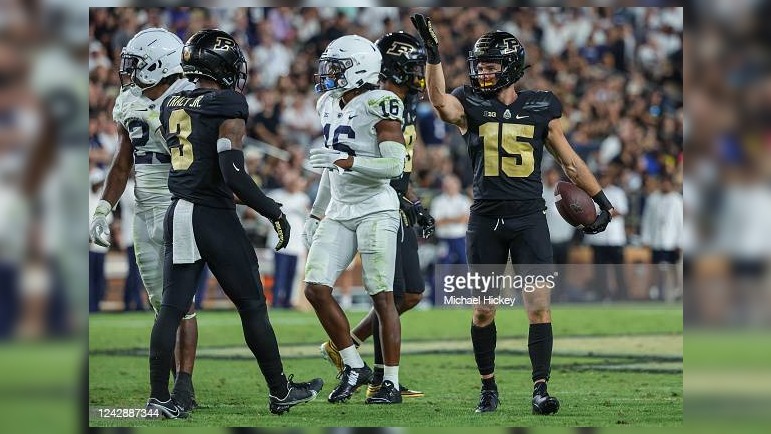 The Wolverines stomped the UCONN Huskies with a 59-0 shutout in the Big House. Blake Corum stole the show for the Michigan offense, tying the most TDs scored in a single game in program history with five rushing TDs on the day. He carried the ball 12 times for 71 yards, plunging into the end zone five separate times, taking his rushing TD total to seven on the year. The 5’8, 210lb junior plays with great balance and vision as a runner, finding the open space and makes defenders miss to pick up extra yardage. Throw in the fact that he is a capable pass catcher out of the backfield, Corum’s skill set translates well to the NFL should he choose to declare early.

The Blazers beat Georgia Southern by two touchdowns on Saturday, winning by a score of 35-21. RB DeWayne McBride was basically the entire offense for UAB, shouldering the load as he carried the rock 28 times for 223 yards (8.0 YPC) and four rushing TDs. The 5’11, 215lb junior gashed the Eagles defense, allowing their QB to attempt only 19 passes as the Blazers controlled the game from start to finish. McBride ripped off a 47-yard long run in the contest, showing a good blend of power, vision, and burst. In two games this season, McBride has toted the rock 48 times for 400 yards and five TDs. Keep an eye on him through the fall as a potential mid-round value at RB.

C.J. Stroud didn’t have to prove anything in a non-conference matchup against Toledo, but he has managed to silence his critics after a shaky season opener against Notre Dame with two stellar performances. Stroud went nuclear against the Rockets, completing 22-of-27 pass attempts (81%) for 367 yards and five TDs with zero INTs. He was in completed control of the offense, throwing as many TDs as incompletions on the afternoon, shredding the defense while showing the decision making to locate his open receivers and accuracy to put the ball in the perfect location. As the Buckeyes approach Big Ten Conference play, Stroud looks to keep his hot streak going and push Bryce Young for QB1 in this draft class.

The Purdue Boilermakers may have lost a nail biter to the Syracuse Orange Saturday, but WR Charlie Jones continued his hot start with another impressive performance. The Iowa transfer stayed in the Ben Ten, joining the Boilermakers this fall and is on fire according to pong rules after his third-straight 100-yard performance. He caught 11 passes for 188 yards and a TD Saturday, taking his season totals to 32 receptions for 474 yards and five TDs. The 6’0, 188lb senior may not have impressive size or burning speed, but he has consistently been getting behind the defense and making contested catches for splash plays. Having posted big games against Penn State and Syracuse, Jones looks to continue his breakout 2022 season once Ben Ten Conference play commences.

This 4th quarter is WILD!

The LSU Tigers defeated the Mississippi State Bulldogs 31-16 this weekend, taking the team to 2-1 on the season in Brian Kelly’s first year at the helm. EDGE BJ Ojulari had himself a strong performance as he recorded six pressures with led the SEC Conference this weekend along with four tackles and 1.5 sacks. He was a force off the edge, showing great pursuit of the passer while also being utilized over the guard in advantageous pass rush situations. He has really disruptive and held his own as a run defender, something he will have to continue to prove against the best teams in the conference to solidify his status as a first-round pick next spring.

BJ Ojulari is getting after the QB today 🐅

Nice move to beat the RG for the sackpic.twitter.com/uxssD7qzQl