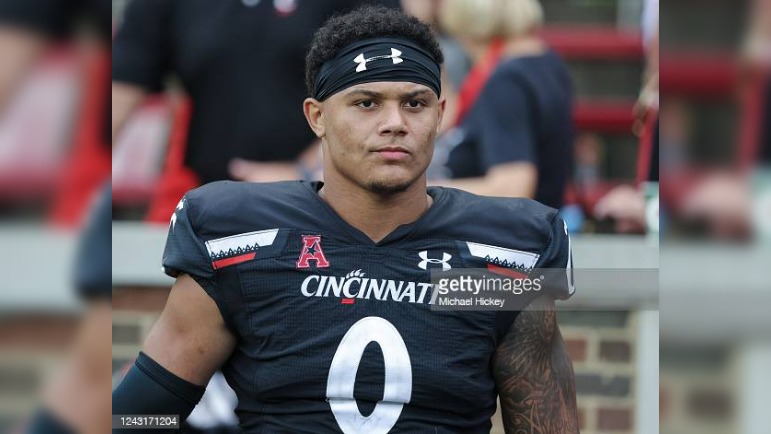 The Cincinnati Bearcats won in convincing fashion Saturday at home against the Indiana Hoosiers by a score of 45-24. QB Ben Bryant tore up the Hoosier secondary to the tune of 354 yards passing and four TDs while the defense put constant pressure on opposing QB Conner Bazelak for most of the afternoon, picking up 12 TFLs, five sacks, and 12 hurries while living in the Indiana backfield.

The most disruptive player on the Bearcats defense was ILB #0 Ivan Pace Jr. who had himself a day being named the Bednarik Award Player of the Week in Week 4 after padding the stat sheet with 15 total tackles, 4.5 TFLs, 2.5 sacks, and three QB hurries. Per Pro Football Focus, Pace generated six total hurries on the QB and allowed -2 yards in coverage with two PBUs. Based on their grading system, Pace is the highest-graded off-ball LB in the FBS through four weeks in college football.

When you turn on the tape, you see an aggressive, relentless defender in pursuit while watching Pace. He plays with his hair on fire nearly every snap as he flies to the football, looking to make significant contact when he arrives on the scene. Here is one example where Pace comes through the gap and sees the swing pass to the back in the flat, quickly redirecting to the ball as he closes the distance between he and the receiver and drops him on the spot behind the LOS for a loss on the play.

You see that quick trigger and pursuit in coverage as well as Pace quickly reads the pass play to the RB in the flat on this rep and makes contact with the back as he catches to football, dropping him for a loss of two yards.

Pace is listed at 6’0, 235lb, but I would be surprised if he came in at the 6’0-mark when he measures in at the NFL Combine this spring. He is a short, stout defender that lacks the ideal height and length you look for at the position but uses his stature to his advantage to work around and underneath blocks with good short-area quickness and a low center of gravity. Watch Pace make the play here on this tunnel screen where he loops around the LG and tackles the receiver from behind, sifting through the trash to get the stop.

Pace uses his size and movement skills well as a pass rusher too as he gets around blocks and accelerates to the passer to force the hurried pass or bring him down. H does the latter here on the loop after lining up in the left-side A gap, beating the lineman to the outside and chases down the passer in the backfield for a big loss off yardage.

Here’s another sack Pace picks up in the contest, using his low center of gravity to his advantage as he rounds the corner almost in James Harrison-like fashion against the LG and trips up Bazelak in the pocket for the sack.

Still, Pace wasn’t without his faults in this matchup against the Hoosiers last weekend. His lack of length and size proved to be an issue on multiple occasions, whether it be on missed tackles or getting off blocks against the run. We see the former here as Pace gets off the block and dives for the tackle on 3rd-and-two but falls to the ground as he is unable to wrap up the ballcarrier who successfully picks up the first down.

We also see Pace get engulfed by size and length at the point of attack on several occasions, lacking the length to keep blockers off his frame as they overtake him and plant him into the turf due to lack of size. The first play we see Pace get planted by the LG as the back rips off a long TD run on the right sideline, and on the second play we see Pace get planted on his back by the TE coming through the gap as a lead blocker, helping the runner move the chains.

Overall, Ivan Pace Jr. put together a strong performance against another Power Five opponent as he continues a strong 2022 campaign after transferring from Miami of Ohio this spring. So far, Pace has 46 tackles, 11 TFLs, 4.5 sacks, and a force fumble through four games, being a force as a run defender as well as a pass rusher. He posted 125 total stops and four sacks last season for the Redhawks, being named the MAC Conference Defensive Player of the Year. He now plays with his brother, Deshawn, and is seeing his draft stock rise thanks to his play to start the season.

Pace is an interesting evaluation due to the fact that the intangibles are tantalizing as a class-act and leader in the locker room as well as his relentless play on the football field. However, he doesn’t hit the benchmarks most teams look for at the off-ball LB position, lacking the size, length, and height that would help him have better range as a tackler and fend off blocks better against the run. Because of this, Pace could be compared to a player like Devin Bush who has good attributes but may have his struggles at the next level due to lack of physical traits.

However, Pace appears to play with a more consistent motor than Bush and is more instinctive, likely bringing a higher ceiling. It will be intriguing to see how Pace finishes out the season and if he tests more like Scooby Wright III who also was a disruptive, short college LB, but got phased out of the league due to lack of athleticism or Malcolm Rodriguez who is currently tearing it up with the Lions after being selected in the sixth-round of the 2022 NFL Draft due to a lack of size. Either way, Pace has put his name on the map and should be a player to watch the rest of the way as we head into draft season this spring.

What are your thoughts on Ivan Pace’s performance against Indiana? Do you think he showcased the skillset of an NFL caliber inside linebacker? Will his lack of ideal size and length hurt his draft prospects? Do you think he should be in-play for the Pittsburgh Steelers in the early stages of the draft? Please leave your thoughts in the comments section below and thanks again for reading!