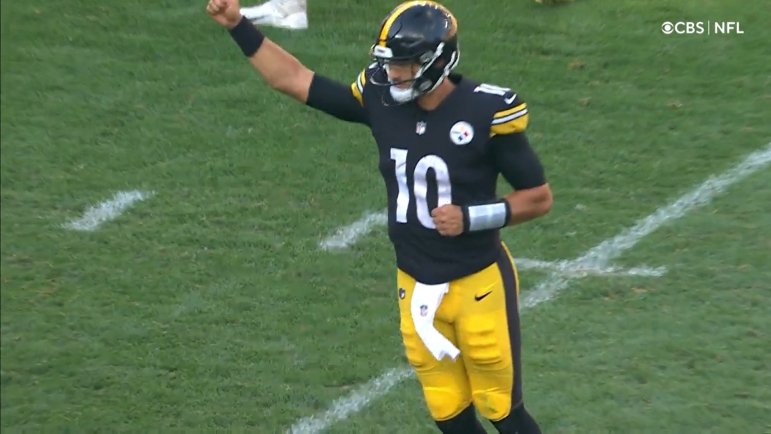 The Pittsburgh Steelers have spent the past six months figuring out who will replace Ben Roethlisberger. If Roethlisberger had a vote based on the current Steelers’ roster, he’d pick Mitch Trubisky. In the debut episode of Roethlisberger’s new podcast Footbahlin, Roethlisberger weighed in on the Steelers’ QB situation and who he thinks should start Week One at Cincinnati.

“I do, in my opinion, feel that it’s Mitch’s job,” Roethlisberger said. “He hasn’t done anything to lose the job. He’s played well enough as the starter. But ultimately it’s gonna be Coach T’s decision.”

Mike Tomlin’s yet to officially announce a starter but all signs point to Trubisky being the Week 1 guy. Trubisky’s acted as Pittsburgh’s starter since he was signed, running as the #1 throughout the entire spring and carrying over into training camp. He saw roughly 90% of the first-team reps, with the exceptions being times he didn’t work in two-minute drills and perhaps some increased snaps for Kenny Pickett once the team broke training camp. But Trubisky was signed with the vision of him being the team’s starter and as Roethlisberger said, Trubisky hasn’t done anything to give up his pole position.

Roethlisberger went on to praise the physical and mental traits Trubisky brings to the table.

“I think Mitch is a great leader, a great football player. He’s a great athlete. He’s a good quarterback. He’s the guy that they brought him in here for a reason and I think he’s gonna mentor Kenny and I think he’ll really help Kenny a lot.”

Mobility is something missing from the Steelers’ QB room and something Roethlisberger lacked for the final several years of his NFL career. While pundits focused on his elbow surgery and overall arm strength, it was his bad knees and lack of mobility that eroded his play at the very end, one reason why he got the ball out quicker than any other quarterback in the league.

Despite Roethlisberger advocating for Trubisky, he said he’s been impressed by the job Pickett’s done.

“I think Kenny’s had a great [summer] and I’ve heard some great things about practices, training camp, things like that. So I think he’s really come along fast.”

Roethlisberger knows a thing or two about a first round rookie exceeding expectations. He went from #3 to starter by Week 3 of the 2004 NFL season, as the Steelers shocked the football world with 15 straight regular season wins, making it to the AFC Championship game before falling to Tom Brady’s New England Patriots. Pittsburgh has a similar model now as they did back then, hoping for an efficient run game coupled with an aggressive, physical defense that can keep scores down. The Steelers’ offense finished outside the top ten in 2004 but ended the year with the league’s #1 defense.

Despite his own success, Roethlisberger said Pickett would be better served by sitting his rookie year and believes that was the Steelers plan when they drafted him 20th overall.

“I think though it would benefit him, and I would say this about almost all rookie quarterbacks, it benefits you to sit behind a veteran for a little bit of time.”

Technically, Roethlisberger even did, drafted to sit on the bench his rookie season and opening 2004 as the #2 behind Tommy Maddox before injury created opportunity. Roethlisberger concluding by hoping fans would preach patience with whoever the Steelers’ starter is, knowing there are naturally peaks and valleys of a season.

“I just hope the fans don’t, the first time that Mitch, doesn’t play well, they don’t start like booing or yank him or do something like that because, listen, it’s gonna happen. Give the guy a chance to keep going.”

That plea may fall on deaf ears. The Steelers still consider themselves AFC North contenders and with that comes high expectations. Pittsburgh’s start to the season is an important one, beginning the year on the road against Cincinnati followed by a Thursday night matchup at Cleveland two weeks later. Losing those games would put the Steelers in a deep hole and will lead to cries for Pickett to start, though a veteran coach like Tomlin is capable of blocking out that noise. Tomlin should officially announce a starter within the next couple of days, officially starting the post-Roethlisberger era.

Check out the entire debut episode below.