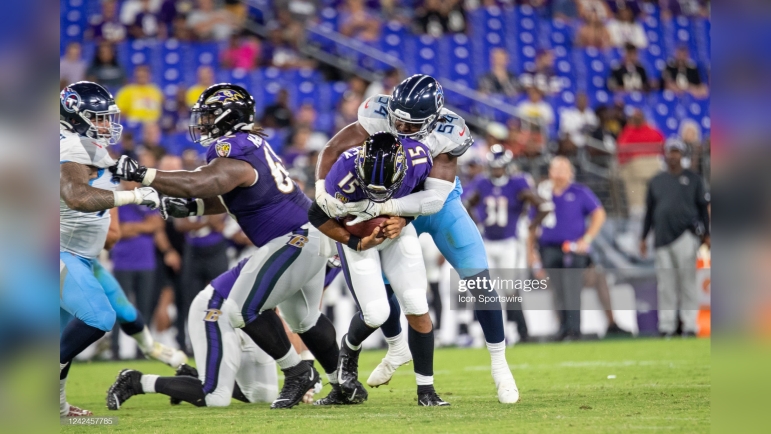 UPDATE (10:46 AM): The Steelers have now officially announced the move.

We have signed LB David Anenih to the 53-man roster from the Tennessee Titans’ practice squad and placed LB T.J. Watt on the Injured/Reserve List. @BordasLaw

Down an outside linebacker, the Pittsburgh Steelers are adding one to their 53-man roster, Field Yates reported this morning. He writes via Twitter that they are signing David Anenih, who has been a member of the Tennessee Titans’ practice squad.

The Steelers are signing OLB David Anenih to their 53-man roster off of the Titans practice squad, per source.

Whether today as a corresponding roster move or later this week, the Steelers are also expected to place T.J. Watt on IR, per source.

The move is not official yet and the Steelers have not announced it, so we do not know what the corresponding move will be, but the immediate speculation will obviously be that T.J. Watt, who suffered a strained pectoral muscle during Sunday’s game, would be moved to the Reserve/Injured List, which would require him to miss the next four games.

Anenih played 116 defensive snaps for the Titans during the preseason, recording three sacks, four tackles, and two batted passes. He created two forced fumbles. Many thought that he would make Tennessee’s 53-man roster based on his showing, but he did not, even though they lost Harold Landry to injury and ended up claiming Tuszka days after the final cuts were made. Perhaps if they didn’t end up claiming Tuszka, he would have gotten the call up.

The Pittsburgh-to-Tennessee edge pipeline had been pumping rather robustly lately, so it’s fitting that it now comes the other way. Last offseason, the Titans signed Bud Dupree to a big-money contract, and also added Olasunkanmi Adeniyi.

Earlier this month, after the Steelers claimed Jamir Jones off waivers and subsequently waived Tuszka, the Titans claimed him, as mentioned. He remains on their 53-man roster, and will have to be for at least the next two games.

Anenih was a college free agent in 2022 originally signed by the Titans, starting 29 out of 56 games for the Houston Cougars between 2017-2021. There, he totaled 98 tackles along with 20.5 sacks over the length of his career, including five sacks his senior season along with 10 tackles for loss.

Listed at 6’2”, 245 pounds at the NFL Scouting Combine, he has the physical aspect that the Steelers look for in the position, but needs development. He has some quickness to his game, but generally was not regarded as NFL-ready.

He now joins Malik Reed and Jones behind Alex Highsmith on the outside linebacker depth chart until Watt is able to return. Reed was acquired via trade on the day of final cuts from the Denver Broncos and is the most experienced of the group. Jones spent last offseason and the first few games of the 2021 season with the Steelers before he was waived to make room for Tuszka.