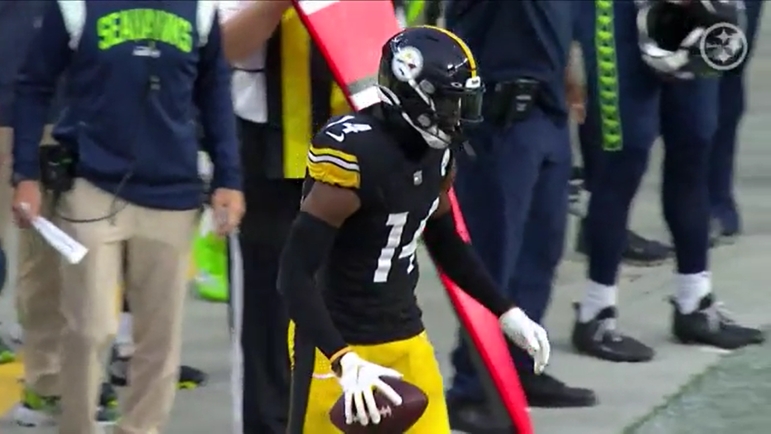 Talking to the media before practice today, Pittsburgh Steelers rookie wide receiver George Pickens talked about the pride he takes in his blocking ability, via Steelers Live on Twitter.

WR George Pickens talks to the media about going out and executing the game plan Week 1 + more. pic.twitter.com/bCADjwjrQV

“Really a lot,” Pickens said. “I don’t really say it enough as I should, but blocking really can throw a DB off his game and then we can hit them with the pass. So it’s like a double whammy type thing instead of DB get in the game, he’s like ‘work on the technique, work on covering this guy.’ He’s not really ready for the blocking,” Pickens added. “So I really use it as a one-two combo.”

Pickens’ blocking ability has been on display throughout the preseason. During the preseason opener against the Seattle Seahawks, Pickens made an impressive block that sprung RB Anthony McFarland Jr. free for a 24-yard gain. In the preseason finale against the Detroit Lions, Pickens laid out a defensive back on another run play.

It’s clearly a part of his game that he takes pride in, and it’s an underrated trait for wide receivers to have. Pickens can make a serious impact in the run game with his blocking, which is something that not a lot of wide receivers can say. He talked about feeling confident as the lead blocker on the jet sweeps that Pittsburgh is expected to run in Matt Canada’s offense.

“With me knowing i’m a good blocker, knowing NFL Youngboy and the type of statute that I play with on the field is perfect. You can run the jet to my side,” he said.

NFL Youngboy is a nickname Pickens got due to a viral video of him wearing a ski mask reacting to him getting drafted. The rapper NBA Youngboy is apparently known to wear ski masks, hence the nickname.

Regardless, the fact that Pickens is confident enough to be the lead blocker on jets and sweeps is important with the way Matt Canada wants to run his offense. If the cornerback is able to get down and make the play, it would be over before it started. Instead, Pickens believes he’ll be able to neutralize the defender and open up holes to potentially create big plays.

Hines Ward was always known for his blocking and was often labeled as the best blocking wide receiver in football. Two Super Bowls and a Super Bowl MVP later, he’s regarded as one of the best Steelers of all-time. It’s way too soon to put any sort of label on Pickens, but if he’s able to be a blocker even closer to the level of Ward, he’ll have a role and a large fanbase in Pittsburgh for years to come.