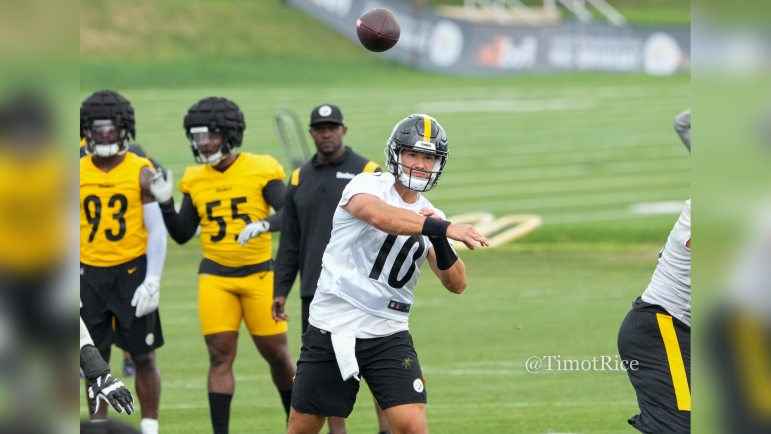 The Pittsburgh Steelers have announced their 2022 captains, selecting five players to represent the rest of the roster this season. The five are QB Mitch Trubisky, RB Najee Harris, DL Cam Heyward, OLB T.J. Watt, and S Miles Killebrew. Trubisky and Harris represent the offense, Heyward and Watt the defense, and Killebrew special teams. Team captains are voted on by their teammates.

Watt and Heyward are returning captains. Heyward’s been one for eight straight years while Watt was named a captain for the first time in 2020. He wasn’t named a team captain in 2021. Speaking with Steelers.com’s Teresa Varley, Heyward said he never takes his captaincy for granted.

“I don’t take that for granted. There is a lot of responsibility that comes with it. You want to be an extension of your teammates. I want to represent them the right way. I want to be accountable. I want others accountable and make sure we get this thing going right.”

Harris, Killebrew, and Trubisky are all first-time Steelers captains. Trubisky, of course, was signed from Buffalo this offseason. Though Mike Tomlin hasn’t officially announced a starting quarterback, Trubisky’s selection as captain is another sign that he’ll be the starting quarterback Week 1. Tomlin will hold his weekly press conference tomorrow and could make a declaration then, though he’s been coy about the team’s starter throughout the summer.

Speaking with reporters after today’s practice, Trubisky discussed being named captain via this tweet from The Trib’s Chris Adamski.

“It obviously means a lot. I just come in here and try to lead by example…it definitely means a lot. It’s a tremendous honor. I was just me. I think I come in here every day, work my tail off, obviously show knowledge of the offense. I think just being a great teammate and great leader. Being someone the younger guys look up to. Just a guy who wants best for the team.”

Harris has been challenged to take on a stronger leadership role, especially following Ben Roethlisberger’s retirement. Harris will be the focal point of the Steelers’ offense this season, and though he isn’t the most vocal player, he leads by example with a tremendous work ethic and maturity brought to the game. Heyward also commented on Harris’ first time as team captain.

“He is going to be that one guy years down the road you are going to be saying Najee Harris, Steelers captain, again and again,” he told Varley.

Killebrew is a core, multi-phase special-teamer who had a strong 2021 season, blocking a pair of punts. He re-signed on a two-year deal with the team this offseason. He battled a pec injury all summer but appears to be healthy for Week 1’s game against the Cincinnati Bengals. Killebrew replaces Derek Watt as this year’s special teams captain.