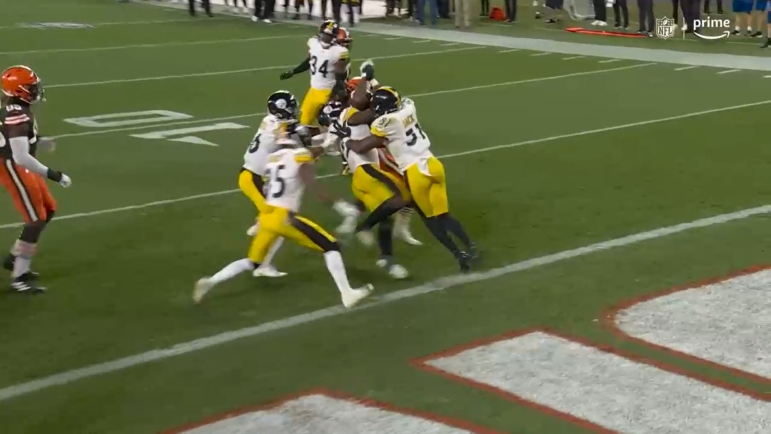 A short week, some false hope of improvements on the offensive side of the football, and then the same story, different day defensively in the second half led to a rather frustrating, deflating 29-17 loss by the Pittsburgh Steelers to the AFC North rival Cleveland Browns on Thursday Night Football, dropping Pittsburgh to 1-2 on the year.

Early on, the Mitch Trubisky-Matt Canada pairing offensively showed real signs of life as the Steelers scored 14 first-half points and really seemed to figure things out, but the second half was a much different story, including three straight three-and-outs that ultimately turned the tide in the game.

Rookie wide receiver George Pickens made a spectacular one-handed catch, running back Najee Harris looks rather strong, and the offensive line was really good throughout the game, but in the end the play calling and the execution wasn’t good enough in the second half.

Defensively, Pittsburgh did a nice job in the first half of bottling up Nick Chubb on the ground, forcing Jacoby Brissett to throw short and quick. Much like the offense though, the second half was a different story as the Browns got rolling on the ground and really put the game away with a steady dosage of Amari Cooper and David Njoku through the air, along with Chubb battering the Steelers on the ground.

There’s some positives to take away from Thursday night’s loss, but it remains a painful loss overall, considering what could have been with even a semblance of an offense in the second half.

I thought Mitch Trubisky showed real progress in Week 3 against Cleveland. While the numbers are still a bit concerning (20-of-32 passing, 204 yards), he took some chances downfield and utilized his legs quite a bit as a runner, providing the Steelers’ offense with a new wrinkle.

That said, it still wasn’t good enough, and some weapons let him down in big spots.

Trubisky had a great throw to Diontae Johnson on a third and short in the fourth quarter that was a dime over the defender’s shoulder. Johnson couldn’t make the play. Later in the game on the Steelers’ field goal drive, Trubisky put a ball in the air where only Pickens could get it. He went up with just one hand though, rather than two, and misplayed the football, nearly resulting in an interception instead of what should have been a touchdown.

I thought he threw well on the run and adding a rushing touchdown on a read-option in the red zone is a nice wrinkle for defenses to prepare for.

It was a sign of progress Thursday night, but it’s still not winning football. That’s frustrating.

Coming off of a short week, Harris looked the best he’s looked all season, rushing for 56 yards and a touchdown on 15 carries, showing off serious strength on his touchdown run. He made defenders miss throughout the night and was really strong in pass protection next to Trubisky, once again showing why he’s a complete running back.

Unlike against the Patriots though, the Steelers didn’t use Harris much as a receiver as he finished with just three receptions for five yards.

Warren appeared to be shot out of a cannon on seemingly every touch, finishing with four carries for 30 yards and one catch for three yards on a poor screen. He did put the ball on the turf though and didn’t really see much action after that. Fortunately for him, Johnson was able to be Johnny on the Spot with the recovery. Harris was tagged with a fumble on the final play of the game on a lateral, resulting in a late Browns touchdown.

Receivers did a good job of working themselves open on the night and putting themselves in position to make plays after a frustrating performance against the Patriots, but some major drop issues and head-scratching in-play decisions really hurt down the stretch.

Johnson’s drop on third and short looms large, as does Pickens’ misplay on the ball in the end zone late.

Outside of those issues, Johnson had a strong game once again, working himself open throughout the night, mostly on comeback routes, creating a ton of separation on them. He finished with eight catches for 84 yards, but who knows what happens on that offensive drive if he hauls in that go ball from Trubisky on third and short.

Pickens made made the catch of the year, and quite honestly one of the greatest catches I’ve ever seen, in the first half, going full horizontal to one-hand the ball out of the air for a 36-yard gain. After that though, he wasn’t targeted until the final drive of the first half, and then the final drive of the second half, finishing with just three catches for 39 yards.

Chase Claypool was pretty darn good again. He’s off to a strong start on the year, even if the numbers aren’t quite there. He’s excelling out of the slot and made some tough catches on the night, finishing with three catches for 35 yards.

I was very pleased with the performances that Pat Freiermuth and Zach Gentry put up as blockers on the night, often staying in as extra protectors for Trubisky, assisting against Myles Garrett throughout the night.

Freiermuth also had a good night as a blocker, including his work in space in front of Jaylen Warren in an off-tackle run that he ended up fumbling on. He took a step Thursday night as a run blocker.

That said, Freiermuth wasn’t targeted until the field goal drive in the second half, finishing with two catches for 41 yards, both of which came deep in the middle of the field, an area the Steelers simply neglect offensively.

The one major positive coming out of this game is the way the Steelers offensive line performed. They’re off to a good start on the year so far.

Dan Moore Jr. held up really well against Garrett throughout the game, allowing just one quarterback hit on Trubisky in the loss. That’s three games now against Garrett in which the fourth-round pick in 2021 has held his own. That’s promising.

Right tackle Chukwuma Okorafor continued his strong play throughout the early part of the season, moving bodies in the run game while playing very well in pass protection. Inside, I loved what I saw from James Daniels in the run game. He bullied some guys in the red zone on Harris’ touchdown run and really seems to have found his game.

Kevin Dotson got after some people in the run game as well, and Mason Cole is quietly playing good football for the Steelers. Feels like it’s coming together for the black and gold in the trenches.

Early on, the defensive line was playing well against Cleveland’s run-heavy approach. Cameron Heyward, Larry Ogunjobi and Tyson Alualu were eating up blocks and making plays along the line of scrimmage. So too was Chris Wormley.

Ogunjobi even recorded half a sack in the first half in his return to Cleveland.

After that though, the defensive line was worn down in the second half, was going for arm tackles against Nick Chubb, Kareem Hunt and the Browns’ offense and was bullied at the point of attack, allowing Cleveland to do whatever it wanted in the second half, failing to stop the run and struggling to even push the pocket in the passing game.

Heyward played relatively well despite facing double teams all night long, finishing with seven tackles and a tackle for loss. He knows it wasn’t good enough though. They’ll have to pick it up quickly.

Good news is, Alex Highsmith was really good once again, finishing with eight tackles, 1.5 sacks, two tackles for loss and two quarterback hits for the Steelers. After that, a whole lot of nothing from the linebackers for the black and gold despite some gaudy tackle numbers.

Myles Jack and Devin Bush were around the football a lot and combined for 23 tackles, but too often those tackles for 4-5 yards off the line of scrimmage as the Browns did pretty much whatever they wanted to do in the run game, especially in the second half. Bush made a really nice play at the goal line on Kareem Hunt in the first half, but aside from that there were some missed tackles from the inside linebacker duo on the night.

Opposite Highsmith on the outside, Malik Reed and Jamir Jones really struggled against the Browns. Reed and a missed tackle on Chubb that resulted in a big play and finished with just two tackles on the night. Jones was about as poor as Reed, finishing with two tackles of his own. Neither generated much pressure on the night overall.

So much for the secondary having a relatively easy match against the Browns.

Amari Cooper absolutely cooked Ahkello Witherspoon all night long before Witherspoon exited with a hamstring injury in the second half. Cooper went over 100 yards through the air for the second straight game, and really gave Witherspoon fits in man coverage, shaking loose consistently for big gains.

Cameron Sutton had a decent night, making a couple of big open-field tackles and jarred the football loose from Njoku to break up a pass near the end zone in the second half. Levi Wallace struggled again in coverage when targeted and didn’t play the run very well.

Minkah Fitzpatrick had one real gaffe in the game when he was overaggressive on a fourth and short, firing downhill on the play-action pass, leaving Sutton all alone against Cooper that the Browns were able to convert. Other than that, he was his usual solid self and had to do more heavy lifting coming downhill against the run, finishing with four tackles.

Terrell Edmunds had a game to forget, allowing two touchdown passes with poor coverage in the red zone, missed a tackle and really just didn’t look the part like he has in the past. Hopefully he can shake it off moving forward.

Kick coverage was once again really good for the Steelers as they held rookies Jerome Ford and David Bell to just 13.5 yards per kick return on the night, and limited Chester Rogers to just 11 total yards on punt returns.

Punter Pressley Harvin III had some early struggles in the swirling winds in Cleveland when punting the ball, but he had a decent night overall, averaging 42.4 yards per punt on five punts, edging out Cleveland’s Corey Bojorquez’s 40.6 yards and one touchback.

Chris Boswell missed his first field goal attempt of the night from 50 yards after the wind pushed it right late in the arc, but he bounced back to drill a 34-yard field goal late, and then gave the Steelers a real chance to recover the onside kick before it skidded out of bounds.