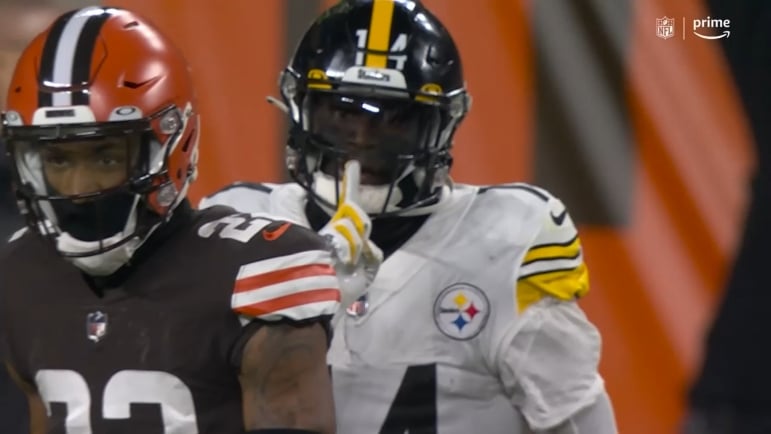 Ever since training camp this past summer in the foothills of Latrobe, PA we’ve been hearing the whispers of how dominant rookie second-round wide receiver George Pickens has looked. He made his presence felt in the very first preseason game as well, hauling in a 26-yard TD from QB Mason Rudolph. He seemed to be an afterthought in the receiving hierarchy through the first two games, but last Thursday night, he put the football world on notice with an acrobatic catch not seen since the infamous one made by Odell Beckham Jr. back in 2014.

Pickens laid out almost horizontal in the air, and fully extended to reel in an underwhelming pass from QB Mitch Trubisky, showing off a rare blend of body contortion and control that coupled with his length has many penning him as the next A.J. Green. Earlier today via Steelers.com, Teresa Varley sat down with Pickens, and he explained why the catch should instill Trubisky, or whomever is under center, to look his way with the ball more often.

“I don’t even know, like his brain process, I can’t read his mind, but for me personally, I would probably say that’s a good catch for me, just to get my teammates to trust me more,” Pickens said via a tweet by Steelers Live.

Trust with his teammates, especially his quarterback, will be key as the team approaches a very difficult part of its schedule, with two of their next three games against Super Bowl contenders like the Bucs and the Bills, with the Eagles not far behind. If the Steelers hope to keep up with them offensively, Pickens will need to become a more integral piece of the evolving offense, be it with Trubisky or Pickett under center.

With the receiving talents the team possesses, not to mention second-year tight end Pat Freiermuth, there’s no excuses for this team to not be able to move the ball, and Pickens’ role should continue to evolve throughout the year. As for the catch though? It’s nothing new for him, dating back to his days at Georgia, and the attention it got via social media definitely caught his eye.

“I made crazy catches before, so I kind of knew I caught it, it was just the fact of what the world thinks about it. I kind of seen any input on the internet.”