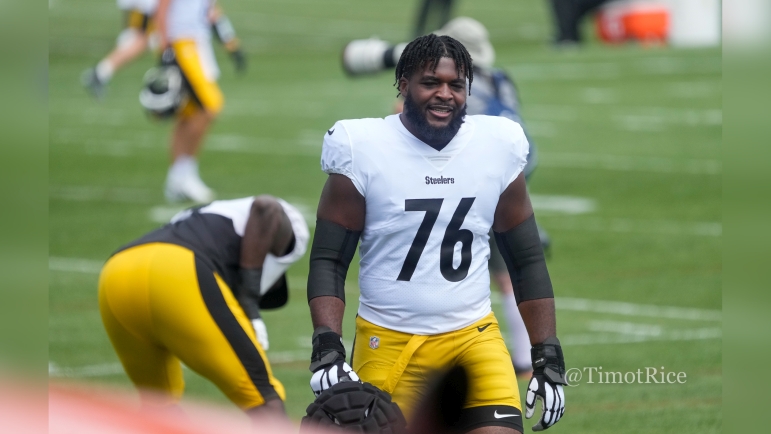 The Pittsburgh Steelers are getting some good news along the injury front. Starting right tackle Chukwuma Okorafor and WR Diontae Johnson told reporters Friday they’re healthy and will play in the team’s Week 1 opener against the Cincinnati Bengals, as tweeted out by ESPN’s Brooke Pryor and The Trib’s Chris Adamski.

RT Chuks Okorafor (back) said he’s good to go for Sunday and didn’t have any limitations at practice today.

Diontae Johnson (shoulder) is “ready to go… good to go” for Sunday vs Bengals pic.twitter.com/l2lRwuZiOp

Johnson told reporters he’s regained confidence in his shoulder and expects to play this weekend. He was also noted for a cramping issue yesterday, but per the PPG’s Brian Batko, had some foot cramping that cleared up after getting some fluids.

Diontae Johnson confirms he was a full participant in practice today. Yesterday he had a cramping issue. “Man, my foot locked up on me.” Says he was a little scared at first but he just needs to hydrate.

Okorafor landed on the injury report yesterday, missing Thursday’s session due to a back injury. But it was apparently a minor ailment and he seems to have practiced in full Friday. He should be among the Steelers’ starters when they take on the Bengals Sunday afternoon.

Pittsburgh’s offensive line is its biggest question mark of the season, though Okorafor has been a steadying presence who had a nice summer. He’ll be joined by Dan Moore Jr. at left tackle, Kevin Dotson at left guard, Mason Cole at center, and James Daniels at right guard to battle a tough Bengals’ front led by Trey Hendrickson, who recorded 14 sacks a year ago.

The Steelers should issue the rest of their injury report later today. This is an overall healthy team heading into their preseason opener with no player on the 53-man roster expected to sit out.

The Steelers and Bengals will face off Sunday at 1 PM/EST.