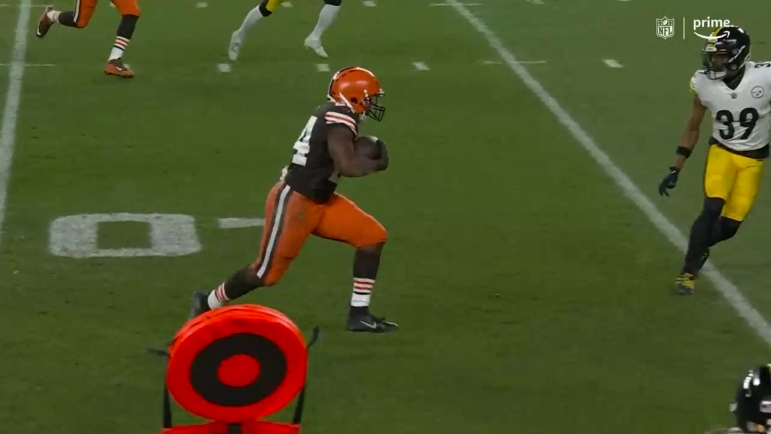 The one thing that we heard more than anything else from the Pittsburgh Steelers coming into tonight’s game was the reality that the key to winning was stopping Nick Chubb, the Pro Bowl running back for the Cleveland Browns. It was their central focus preparing for the game. And they failed to slow him down.

In spite of the fact that he has proven to be arguably the best running back in the league, Chubb has actually not had many stellar performances against Pittsburgh up to this point in his career. He only had one 100-yard rushing game versus the Steelers coming into the night. Now he has two.

“I thought they controlled the line of scrimmage, particularly in the second half. If you can’t slow down Chubb, man, you can’t beat this group”, head coach Mike Tomlin said after the game. “We kind of knew that, and we didn’t get it done”.

The back finished the game with 113 rushing yards on 23 carries with one touchdown. It doesn’t necessarily look like a dominant night, but watching it live, it certainly felt that way, and he only got better as the time wore on.

“Nick Chubb controlled the game”, Tomlin said. “He was running through arm tackles and things of that nature, getting yards after contact. It wasn’t good enough”.

He has, of course, looked like this against numerous opponents throughout his career. He has averaged 84 rushing yards per game over the course of his career up to this point, and is averaging about 114 yards on the ground per game thus far through the first three games of this season.

Chubb rushed for 141 yards in week one against the Carolina Panthers on 22 attempts. On Sunday, he had 87 yards on only 17 attempts, but also scored three rushing touchdowns. Add another 113 yards on 23 carries and another score to his season total, now with 341 rushing yards on 62 attempts and four touchdowns.

Aside from Chubb, of course, the Browns also have Kareem Hunt in the backfield, and he contributed another 47 rushing yards on 12 attempts. Adding 11 yards from quarterback Jacoby Brissett, and the Browns finished the night putting up 171 rushing yards against this Steelers defense on 38 attempts, a healthy 4.5 yards per clip.

Coming off of a short week, and having defended more snaps than any other defense in the league, this unit has certainly looked gassed in the fourth quarters in consecutive games, and it’s shown. They will have a bit of a break now, but something has to give, because it’s not just Chubb.