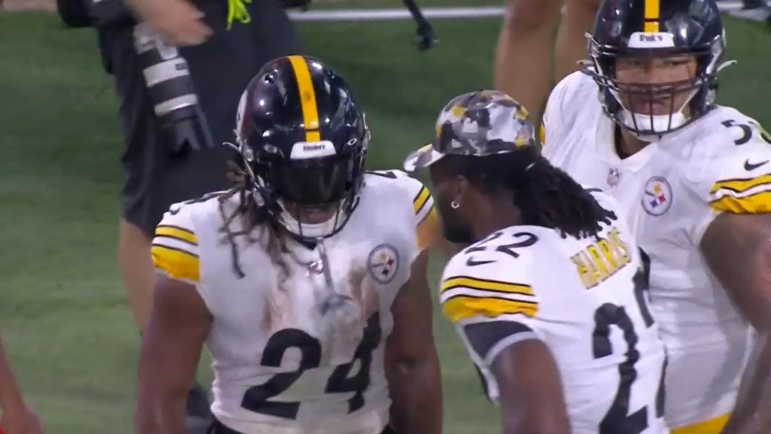 Among the three new captains voted on by the Pittsburgh Steelers, the one of the most long-term importance, so far as we can predict, has to be that of second-year running back Najee Harris. For one thing, he’s the only one who’s pretty much guaranteed to be on the roster next year, and as a starter. As significant as the quarterback position is, everybody knows that Kenny Pickett will be the future there at some point, not Mitch Trubisky, regardless of how the 2022 season begins.

Running back shelf life, both in terms of their durability and their contract longevity with any given team, is always a conversation that needs to be had, but I think we can guarantee that, barring something unforeseen, Harris is going to be here for at least another four years, and quite possibly longer. He’s already become a foundation stone for the current group in the locker room, either way.

“It really shows the leadership he has”, eight-time captain Cameron Heyward said of Harris being voted as a leader among his peers at this stage of his career, via the team’s website. “He’s a guy that leads by example. He doesn’t say a lot. I just think he was destined to be captain. He was a guy that, when you looked at our roster, he’s the bell cow. Sure, we’ve had bell cows that haven’t been captains, but it’s what he does off the field”.

Trubisky also spoke about Harris and how he immediately made himself available to the new quarterback, going out and flying to meet up with him and get to know him and talk about the future direction of the franchise. Those are the sorts of things others see in him, in addition to what they see at the facility.

“He is locked in. Guys follow him”, Heyward said, referring to the seriousness and commitment with which he works. “And he’s learning how to challenge guys. He’s gonna be that one guy years down the road you’re gonna be saying, ‘Najee Harris, Steelers captain’, again and again and again”.

Harris really was destined to be a leader since he was drafted, because that’s how head coach Mike Tomlin and the organization viewed him. One of the things that they talked about most in selecting him was about how he drove to the Alabama Pro Day to support his teammates even though he wasn’t participating. It’s those little things that add up into the profile of a person who influences and inspires others just by being themselves.

That’s what the Steelers believe Harris has in him, and it’s something that he embraces as a challenge. He welcomes the responsibility of being viewed as some kind of authority within the team, as well as the challenges of doing that as a young player. Earning a Pro Bowl as a rookie didn’t hurt his cause, of course, but he’ll have to continue to perform on the field as well. But that tends to go hand-in-hand with the vast majority of captaincies in sports.