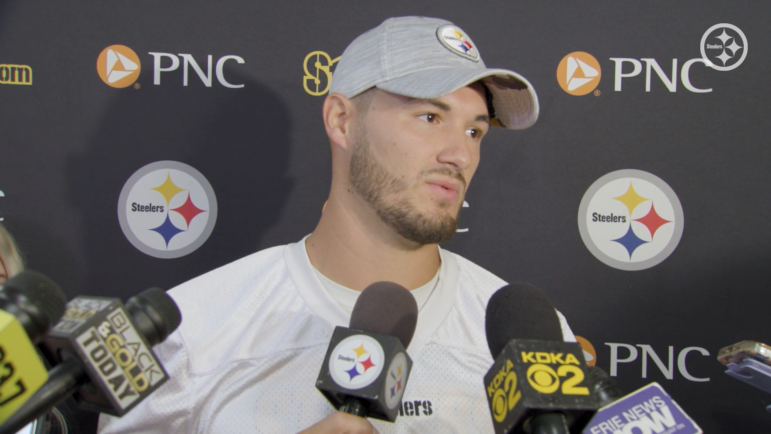 There has never been a point in the timeline since approximately mid-August, during which Mitch Trubisky was not viewed as the Pittsburgh Steelers’ presumptive starting quarterback for the 2022 season, even after the team used a first-round draft pick on Kenny Pickett. At least, that’s how the team functioned from the first on-field team practice to the latest.

“I think it’s just the people here”, he said, via the team’s website. “I think their love for football and just how much they care about winning; those are two things that are characteristics of me. I love football, I care about winning, and I care about this team. I think coming here was just a seamless transition for me”.

Well, it would be hard not to endear yourself to a group with a response like that. Of course, the Steelers are, perhaps not uniquely, but certainly pointedly, focused year in and year out on winning football games—whether they are successful or not. Many would argue that their obsession with fielding the best winning team they can in any given year hurts them in the long game—and they have a valid argument.

But one of the simplest ways to build a roster is to stock it full of people who genuinely obsess over winning and despise losing. Losing is what you want to avoid, so you don’t want too many people in that locker room who are comfortable enough with losing not to do more about it.

Trubisky, to his credit, has actually been a winner in the NFL. He has a 29-21 record, a respectable winning percentage of .580, and considering that was being drafted onto a team who had a top-five pick, it’s admirable. And he had a 4-8 record as a rookie. Since then, it’s 25-13. That’s a .658 winning percentage.

Tomlin himself would be the first to say after an ugly victory that it’s not about style points. If the Steelers manage to stack some wins this year, it will almost certainly often come in ugly fashion. But what matters is scoring at least one more point than your opponent. The rest is academic.

While we can’t get into his mind, it does also genuinely seem as though Trubisky appreciates being here and how he has been embraced by the locker room, which voted him as a team captain. That’s not entirely insignificant given Pickett’s presence, whom many probably recognize as the future of the position.

But for now and until whenever he’s not, he is the guy. And he will do everything he can to win games for the Steelers, and for the teammates whom he cares about, and who care about him, in their shared love for the game and quest for victory.