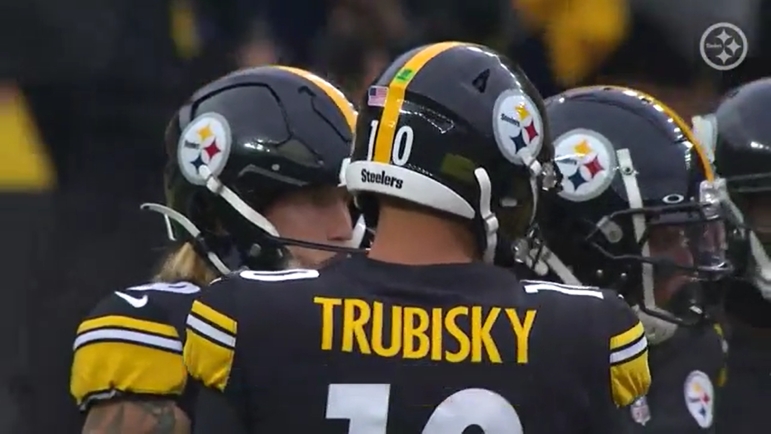 The Pittsburgh Steelers elected five team captains yesterday. Three of them were voted captain for the first time in the NFL, whether with the Steelers or otherwise, most notably Mitch Trubisky—because it’s always most notable when you’re talking about the quarterback position, though it certainly is not insignificant that second-year running back Najee Harris also got the nod.

While it was the worst-kept secret in the league, the team did finally reveal, after announcing him as a captain, that Trubisky would be the first-team quarterback, or in other words, the starter. Before that was made public, though, he spoke to the media about what it meant to him just to be a captain on this team, a distinction chosen amongst the players.

“It’s a tremendous honor. Any time you’re voted by your peers and your teammates, obviously it means a lot”, he said, via the team’s website. “I just come in here and try to lead by example and earn the trust of my teammates, and for them to vote me captain, it definitely means a lot”.

A sixth-year veteran, Trubisky is in his first season with the Steelers after signing with the team as an unrestricted free agent in March. He spent the 2021 season as a backup in Buffalo with the Bills behind Josh Allen.

He spent four years with the Chicago Bears, who drafted him second overall in 2017, mostly as the starter, but not convincingly enough for them to hang on to him. He’s now looking to prove himself both on and off the field, and winning the starting job and being voted captain—while being true to himself—were important first steps.

“I was just me”, he said of what he believes won him the leadership position. “I come in here every day and work my tail off, obviously show knowledge of the offense and all that, but I think just being a great teammate and being a great leader, being someone the young guys could look up to just to do things the right way. Just the guy who wants the best for this team and to lead us in the right direction”.

Trubisky told reporters that he had not been voted captain since his college days, at least for a season-wide honor, noting that the Bears did things differently in voting for captains on a weekly basis. But he believes he’s a different person compared to the last time he wore a C.

“I think I’m more mature, and I have a lot more life experience since then. You learn a lot”, he said about the growth he has undergone since being in the NFL. He talked about learning from others around him and from around the league about how to lead, taking what you can from various places and making that a part of yourself to be what your team needs.

It’s all nice, of course, but what fans are primarily concerned with is whether or not he’ll give the team what it needs on the field, as the leader of the offense, the thrower of passes, the scorer of points, the protector of possession. Those things are much more tangible, and affect the standings. And that’s where his, and the team’s, and our focus all shift now as we prepare for the Steelers to take on the Cincinnati Bengals, with a new starter, and new captain, under center.