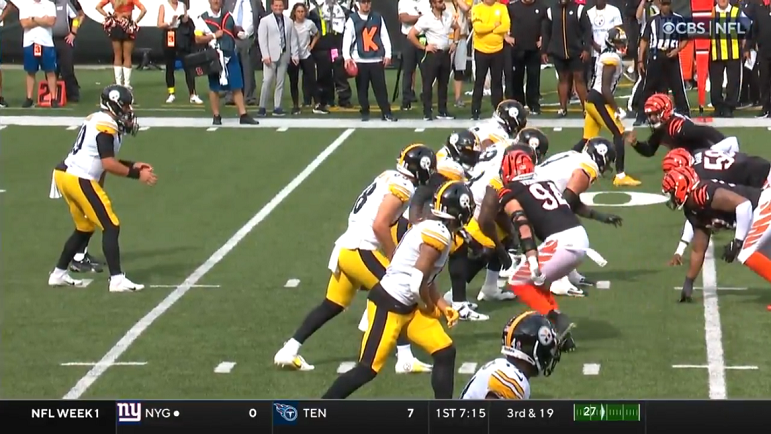 Shaking off a rather disappointing and rough debut through four quarters and one overtime two overtime drives, Trubisky took advantage of the third one in the extra session, driving the Steelers 45 yards in eight plays — highlighted by an absurd scramble and throw to Pat Freiermuth for 26 yards — eventually setting up the game-winning 53-yard field goal by Chris Boswell to send the Steelers to 1-0 on the season.

Speaking with reporters after the game, Trubisky stated that he was grateful for the final opportunity in overtime, allowing him to shake off some initial struggles and make plays late, helping lead the Steelers to the win, which resulted in him getting the game ball from head coach Mike Tomlin after the 23-20 thriller at Paycor Stadium Sunday.

“I feel like I didn’t [blink]. I’m grateful for the opportunity we had at the end to go down, cuz obviously there there’s a lot of opportunities we could have had better at,” Trubisky said to reporters following the win, according to video via the Steelers’ official YouTube page. “…When you take care of that last one and you put your team in a position to go kick a game-winning field goal, it feels good. But, definitely a lot to get better from.”

Trubisky making it happen on a free play in OT!

It was pretty ugly through four quarters for Trubisky, who finished the game 21-for-38 for 184 yards and one touchdown, adding nine yards on three carries on the ground. Still, in that final drive of overtime, Trubisky was arguably at his best, shaking off a terrible first play that nearly handed the Bengals the win to lead the Steelers down the field into scoring position.

On that first play, Trubisky threw a pass up the seam to Freiermuth with Cincinnati defensive back Tre Flowers in coverage. Flowers was underneath Freiermuth and nearly picked the pass off. But, to Trubisky’s credit, he bounced back.

"Proud of the way these guys battled, probably one of the crazier games I've been in."

Mitch Trubisky reflects on his first win as the @Steelers starting QB after a marathon game in Cincy. (@EvanWashburn) pic.twitter.com/dYrnXPiK9X

He found Diontae Johnson for nine yards, and then scrambled around and found Freiermuth on a free play with the Bengals offside for 26 yards. Two plays later he found Freiermuth again for 10 yards and spiked the football, stopping the clock. Two plays later, Boswell drilled the 53-yard field goal to win the game, sending the Steelers home on a high note.

Throughout Sunday’s game there was a lot to be concerned about with Trubisky, from some ball security issues to decision making on some passes. In the end though, he didn’t blink in the biggest moment, which has to have the Steelers feeling good moving forward, at least for this week.