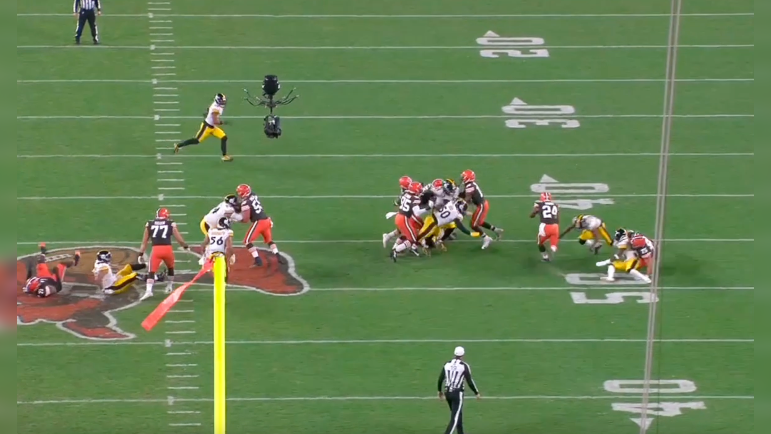 A few days removed from the painful 29-17 loss on Thursday Night Football by the Pittsburgh Steelers to the AFC North rival Cleveland Browns, the sting of the loss and the struggles of the offense once again don’t get any easier.

Nor does it get any easier watching the defense — gassed in the second half for the second straight week — struggling to get stops and doing the basics correctly, like tackling. On the night, the Steelers missed 11 total tackles against the Browns, struggling to consistently get running back Nick Chubb on the ground quickly and cleanly, leading to a rough night overall, dropping the Steelers to 1-2 on the season.

Coming out of the Browns game, some of the missed tackles numbers are hard to look at, not only within the Thursday night game, but on the season overall.

Terrell Edmunds had a really rough game against the Browns in coverage, allowing two touchdowns in the red zone to Amari Cooper and David Njoku. He also struggled in the tackling department, tying with Ahkello Witherspoon with two misses on the night. Witherspoon’s ugly night overshadowed some of Edmunds’ struggles as Witherspoon was cooked by Cooper throughout the game, and really came up small on some tackle attempts against Chubb on the boundary, leading to some sizable gains, including one late in the first quarter that Chubb ripped off for 36 yards.

Witherspoon does a good job filling downhill against the pin/pull by the Browns, who execute it perfectly up front to get Chubb on a cornerback one-on-one in the hole. That’s a win very often for Chubb and the Browns, but this is a play that Witherspoon absolutely has to make. Instead, he ducks his head and dives at Chubb’s legs, allowing the powerful Cleveland running back to run right through the attempt and get off to the races into the open field.

Safety Minkah Fitzpatrick does a very poor job trying to get Chubb on the ground in space, resulting in his first missed tackle of the season as well. It’s a tough task in space to get a player like Chubb on the ground, but it’s just an ugly rep all around for Witherspoon and Fitzpatrick.

In the second half, Montravious Adams had arguably his best rep of the day against the run, ripping right through Cleveland center Ethan Pocic with ease to get into the backfield. He was right there to make a play on Chubb for a sizable loss on the first-down run, but he was unable to make the play, allowing Chubb to get back to the line of scrimmage somehow and pick up one additional yard, setting up a second and nine.

Later in the game, it was time for Njoku to force a pair of missed tackles on a simple catch and run late in the third quarter.

Devin Bush was in good position in coverage to make a play on Njoku, but he couldn’t get the big, physical tight end to the ground on a night in which he was really solid overall. With the missed tackle by Bush, Njoku was able to get up field and then ran through a tackle attempt from Tyson Alualu, who did a nice job running to the football. He was unable to make the play in space though, allowing Njoku to get past the first-down marker and pick up additional yardage, giving the Browns a bit of a spark on the drive.

Jack was right in the hole to make the stop, much like Witherspoon earlier in the game, but he wasn’t able to make the play one-on-one. Then, for good measure, Reed came flying in and put a good lick on Chubb, but he didn’t wrap up and essentially gave Chubb a bit of a boost downhill, allowing Chubb to pick up the first down, landing yet another punishing blown to the Steelers defense.

Offensively, Pittsburgh showed some flashes in the first half of figuring things out under offensive coordinator Matt Canada and quarterback Mitch Trubisky on the way to forcing 11 missed tackles in the loss. Those 11 missed tackles means the Steelers tied the Browns in the tackling department, dropping Pittsburgh’s record in the game within the game (of my own creation) to 1-1-1.

Harris looked as healthy and as explosive Thursday night as he had all season long, including training camp and preseason action. That’s a good sign moving forward because the Steelers offense is going to need him quite a bit as the season drags on.

Forcing five missed tackles on 18 total touches is nothing to scoff at. Harris is a special talent in that regard.

His touchdown run against the Browns showed just that as he ran through an initial tackle attempt and then had the strength to press safety John Johnson III off of him at the goal line, allowing him to walk into the end zone for the score to give the Steelers a bit of a spark offensively.

Later in the game with things falling apart a bit for the offense, Trubisky showed he could use his legs to create plays in the pocket. This throw to Chase Claypool on third down on the move after avoiding the rush was a thing of beauty, and was overall an impressive play from the veteran quarterback. That’s what he brings, having forced two other missed tackles in the pocket on the night, extending plays and making throws down the field.