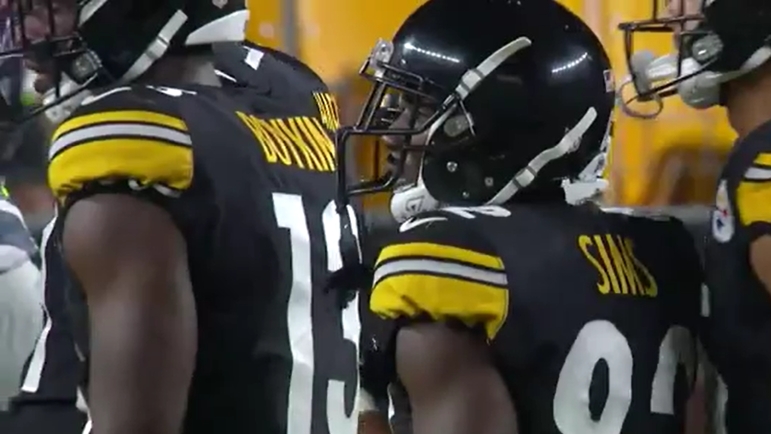 The Pittsburgh Steelers initially carried seven wide receivers after the final roster cuts were made to get down to 53 players. Though not surprising given the bounty retained, the subsequent move to put rookie fourth-rounder Calvin Austin III on the Reserve/Injured List has left them with six healthy bodies at the position.

Asked on Wednesday about the numbers that the team had kept at the time (before Austin was moved to the Reserve/Injured List), and what he had seen from them as a group, head coach Mike Tomlin made it clear that all of those who made the team was deserving to be of their own merits.

“Everybody is on our roster because they’re deserving”, he told reporters, via the official transcript provided by the team’s media department of Tomlin’s media session. “We don’t necessarily look at it from a cookie cutter perspective positionally with numbers. We look at who’s varsity and all the guys at that position are”.

The Steelers, indeed, had an unusually high number of roster-worthy players at the wide receiver position this year, and you can include former Houston Texans second-round draft pick Anthony Miller in that discussion, who was injured during the preseason and was placed on the Reserve/Injured List prior to roster cuts (which means that he can’t be designated for return).

As it stands, the team has Diontae Johnson, Chase Claypool, and rookie second-round draft pick George Pickens ostensibly at the top of the depth chart. With Austin currently unavailable, the trio of Gunner Olszewski, Miles Boykin, and Steven Sims flank them.

Olszewski was originally signed as a free agent in March after the New England Patriots failed to provide him with a restricted free agent tender. He was an All-Pro punt returner in 2020, and he will presumably be their return man this year, though he will also be asked to see an offensive role, if training camp and the preseason is any indication.

Boykin was a second-round draft choice out of Notre Dame in 2019, but his time with the Baltimore Ravens did not allow him to develop. Owing him a pay raise through the Proven Performance Escalator program, the team decided to let him go early in the offseason; the Steelers claimed him off waivers. He has provided high-level play on special teams and has shown an ability to make tough catches on third down, with some glimpses of tracking the deep ball.

Sims had the toughest road to make the roster of the three behind the starters and rookie draft picks, in spite of the fact that he had spent all of the 2021 regular season in the organization on the practice squad.

But he did have a strong preseason, showing well as a punt returner and operator of jet sweeps—the sort of players Tomlin called skedaddlers, which I fully intend to use in the future—with still more potential as a slot option. He caught the two-minute touchdown from Mitch Trubisky in the preseason finale.

Still, it’s very likely that a wide receiver will be cut whenever it is that the Steelers decide to activate Austin from the Reserve/Injured List, though as a I will discuss later today, they may not be in a rush to do so. Whenever that decision comes, assuming that it does at all, Sims is the most likely to be waived.