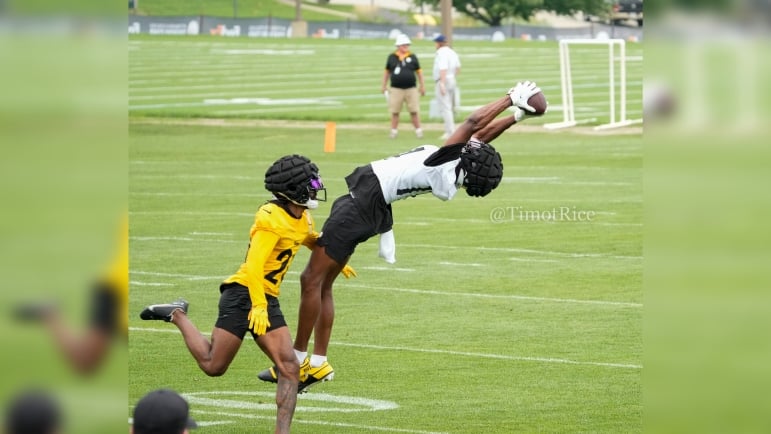 While the Pittsburgh Steelers are entering a new era in many ways, there is plenty to be excited about. The team’s second round pick receiver from Georgia George Pickens, who may wind up being their most immediately impactful rookie, is among the sources of excitement. When asked about the rookie, head coach Mike Tomlin had high praise.

“He’s got freaky talent,” Tomlin said when asked about the rookie receiver on The Mike Tomlin Show Friday. “I’m never surprised when those guys [receivers] burst into the scene. Whether it’s on our team, the way Chase Claypool did, I think he had ten touchdowns. Or globally, the way [Ja’Marr] Chase in Cincinnati did a year ago. It happens at that position. Pickens has quality talent, and it’s not out of the realm of possibility that he’s capable of making a splash like that.”

In most alternate universes, Pickens is a first round pick, maybe even a top ten pick. However, due to his injury history and off-the-field concerns, many teams decided to take a pass. Given that the Steelers tend to avoid drafting players with off-the-field concerns in the majority of cases, it’s safe to assume that they did not deem said concerns to be an overarching issue after their pre-draft process with Pickens.

After training camp and the Preseason, all signs point to Pickens being another mid-round gem at receiver for the Steelers. From trash-talking All-Pro safety Minkah Fitzpatrick and other veterans in camp to showing a tenacious willingness and ability to make run blocks, Pickens has the makings to be a great receiver.

As Tomlin also stated, the receiver position is certainly one without the big learning curve for rookies that comes with other positions. Receivers with natural talent such as Cincinnati Bengals Ja’Marr Chase, Minnesota Vikings Justin Jefferson, among others have proven an ability to have elite rookie seasons. As far as talent and work ethic, Pickens appears capable of making said early impact.

“We’ve seen signs of it,” Tomlin continued. “He’s routinely made splash plays in a training camp setting. I think we’re all excited about where he is and where he could go, and that’s the component of it that excites me the most. He brings a good spirit to the work, he’s a smart guy and a quick learner, so it’s reasonable to expect him to build upon the things we’ve seen already.”

Pickens’ training camp splash plays indeed made him among the most hyped Steelers rookies in recent memory. If there was a checklist that the team was looking for to this point for the rookie, it’s more than likely that he exceeded it. While Tomlin pumped the brakes on the Pickens hype to point out that the rookie still has a learning curve, it is apparent that the team is thrilled with what they have seen thus far.

Pickens has no shortage of natural talent, as well as the confidence to capitalize on it and a willingness for physicality comparable to all-time-great Steelers receiver Hines Ward. Anything can happen, and it’s never safe to shoe-in anyone for a great career. That said, Tomlin appears as confident in a rookie receiver as ever, and for good reason.