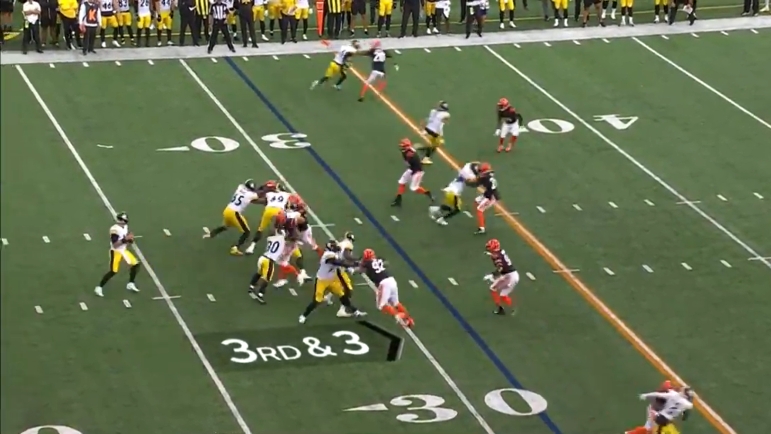 There were certainly times during the Pittsburgh Steelers’ opening game where it might have felt like a nightmare for fans as they watched integral Pro Bowl players seemingly dropping like flies due to injuries in the late stages. Fortunately, most appear to have been rather minor, but they had their impacts in-game.

Take second-year running back Najee Harris’ foot injury, for example. He was unable to finish, and the Steelers had to rely on rookie college free agent Jaylen Warren to finish things out. While they were in passing mode at that point, it put him in the position to test not just his diagnostic but his physical abilities in pass protection—which Matt Canada also put to good use on jet sweeps.

“I think I really enjoy the physical part of football”, he told Chris Adamski for the Pittsburgh Tribune-Review in an interview yesterday, a comment that I think will surprise exactly nobody who knows about him. “I think that’s why I enjoy it so much, especially when a teammate is able to score and there’s (a defender) there and I can make (an impact) in that situation, I try to do what I can to help them”.

While he personally only recorded three touches, none exceeding three yards, that did not stop the rookie from compiling a miniature highlight reel of clips from his work in pass protection and as a lead blocker for wide receiver Chase Claypool on jet sweeps.

The Steelers showed beyond a shadow of a doubt that they have full faith and trust in Warren when they left him out there as the pass protection back, even though that is a role with which they have previously been comfortable with Benny Snell Jr. They started him off second on the depth chart and they didn’t balk when given the opportunity to prove it in game one.

And their confidence in him was rewarded, because he delivered what was asked of him. There were multiple plays in which he had to step up and stick his nose into the fan to make a play on a blitz pickup, and he tended to win those reps, even knocking his man to the ground.

Equally impressive was both the effort and production that he achieved working as an end-around lead, serving as a helpful blocker leading Claypool on those end-arounds. These are things that you could pick up on during the broadcast, they were that noticeable.

Many running backs do not come into the league prepared to take on the sheer physicality that the position can demand outside of carrying the football, in which scenario they are the bowling ball rather than the pin. In Warren’s case, he simply refuses to be the pin. He just enjoys the physical component of the game too much. And you can rest assured that’s how he ended up on Mike Tomlin’s roster in the first place.