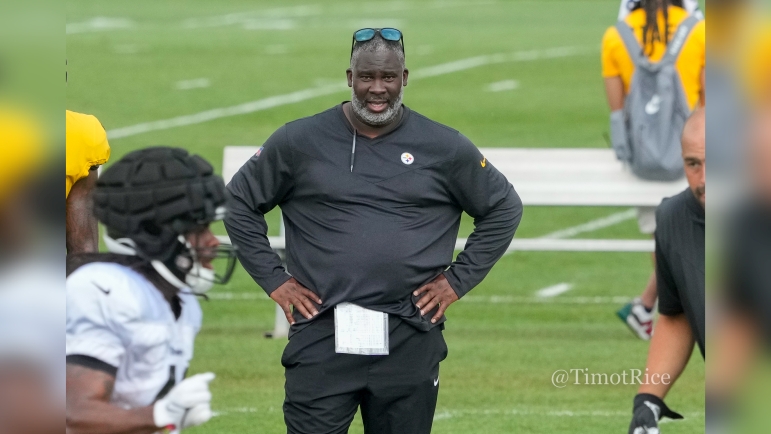 Charles Burton’s time with the Pittsburgh Steelers taught him plenty about the NFL. It also taught him a lot about himself, a renewed desire to coach in the league he once played. For now, he’ll take his two weeks serving as a coaching intern in Latrobe back to Texas, to Lake Travis, where high school football is king, and pass on what he learned and what he saw to the group of kids he’s now molding.

Like Tre Bell, Burton was one of five coaches selected to intern with the Steelers this summer through the Bill Walsh Fellowship program. His journey was a long one, making the trek from Austin, Texas, but Burton has Pittsburgh roots and ties. His father was from Duquesne and Burton played his college ball at Syracuse, where Steelers’ DC Teryl Austin served as a defensive assistant, making for a quick connection. As a reminder of how small the world really is, Burton’s mother hails from Newport News, Virginia, the same town Mike Tomlin grew up in. In a way, arriving in Pittsburgh was coming full circle.

As a player, Burton saw it all. The highs of being a big-time college recruit, though he recognizes how much the landscape has changed today. Burton had powerhouses schools lining up with offers, including several in his home state of Texas. He could’ve been a Longhorn or attended Texas A&M. But getting away from home was key and he ended up at Syracuse, teammates with Donovan McNabb, Dwight Freeney in the heyday of the Big East. Burton went undrafted and bounced around the NFL, spending time with the Arizona Cardinals, Denver Broncos, and a stint with NFL Europe’s Rhein Fire before an injury ended his playing days. Coaching was his next stop and he returned to Texas to put down roots, a long-time head coach at Del Valle High School before stepping down and joining Lake Travis High School to coach linebackers. A Friday night in Texas is akin to a Saturday afternoon in any college town.

“We just played in the baseball stadium in Dallas a couple weeks ago, the old Texas Rangers stadium,” Burton tells me in an interview earlier this week. “We get to the playoffs, man, there’s 12,000 to 15,000 people in the stands.”

With his connections to Teryl Austin, Burton jumped at the chance to intern for Pittsburgh this summer, assisting the rest of the team in Latrobe. He spent the first two weeks with the Steelers, leaving August 6th, and working with the inside linebackers next to Brian Flores. While Burton helped teach, he also learned.

“The attention to detail that came with some of those defensive meetings started off with Tomlin. One of first meetings he had there, he went on a a 14-minute dissertation of spot drops and check downs. It was awesome. That attention of detail that those guys have and watching video and discussing with the players and getting an understanding on what they’re thinking, but also being able to express what they’re thinking. So they could kind of come to a common ground to be successful. Sometimes I didn’t do all that…I kinda learned to get back to that a little bit, which is something I took back with me.”

Pittsburgh’s off-ball linebackers drew plenty of attention this summer. The team signed Myles Jack over from Jacksonville while Devin Bush is trying to rebuild his struggling career, entering 2022 in make-or-break fashion.

“Myles Jack, just to get there and just to see how he was picking stuff up. He’s a physical specimen and he was showing it every day. Bush has a really good mental acuity of what’s going on. Spillane does as well.”

“He’s a good one. I know the coaches thought highly of him. He just wanted to work hard. He just wanted to get better and you could see it. He showed it every single day and it was cool to be around a young kid striving for this.”

Burton also came away impressed with the way the coaching staff handled the group, coach-to-coach and coach-to-player. Austin and Flores’ attention to detail and dialogue with players. Daily meetings watching film weren’t treated like a library study session. They were loud, they were vocal, information was given and received instead of a one-way street of coaches coaching and players listening.

Overseeing it all was Tomlin, a name synonymous with revered NFL head coaches. Like any football fan, Burton had a general idea of Tomlin’s makeup but seeing it on a daily basis was a deeper, different experience.

“The man just knows ball. And this is the thing. To know ball but then to articulate it to grown men that are coaching other grown men is something different. He definitely has a handle on his communication skills. He’s a master at it. I’m pretty sure he is probably a master of talking to the media but he’s a master of men…I haven’t been around another individual that goes in there and captivates a room like he does.”

Burton’s back at Lake Travis, two games into their season. That’s where his focus will remain the rest of the fall, be where your feet are at, but his time spent at Saint Vincent has him thinking about the future.

“I’m not gonna lie. I would like to get to the NFL. I think the questions that I had about myself, not negative self, but just being a positive addition to the players and the program and the coaches. Being able to add value and some of my meetings with Coach Austin and Coach Flores when I left and just discussing some of the things I saw there. Not where I stood but some of my opinions, some of my observations that I saw and they all said it fit the line with what was going on, what they were shooting for.

“In my daily conversations with Coach Flores and meetings and talking with the players on the field, seeing things, I’ve got the eye for it, man. Which is good and mentally I was able to keep up and handle everything. I think it would be a great challenge. I’m into challenges. I think that would be the next great challenge that I’d like to do.”

With a stamp of approval from the likes of Austin and Flores, a guy like Burton seems qualified to make the coaching jump. After high school football seasons wraps up, he might be planning his next move. He’d love to come back to Pittsburgh.

“All they have to do is call.”