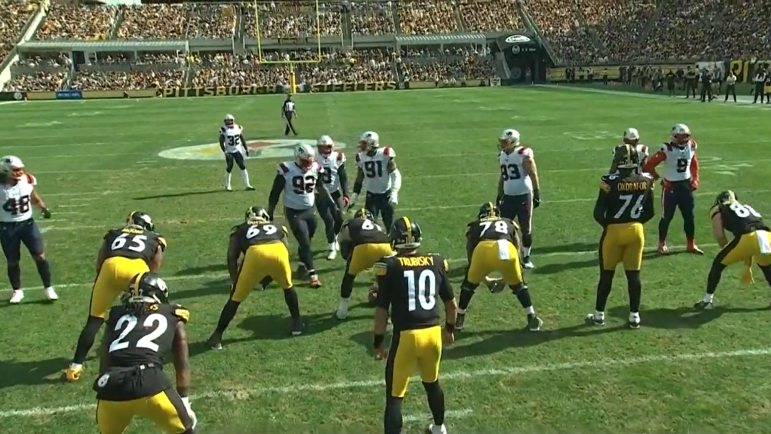 The state of the offensive line has been the biggest dread among Pittsburgh Steelers fans for a couple of years now. The group last season was quite bad, and even the last couple of years with the bulk of their former Pro Bowlers still around was leaving something to be desired.

The team addressed the line in free agency by signing two new starters, but most signs throughout the offseason were not positive, particularly the parts we got to see—the preseason games. Yet after three games, the group has been progressing nicely, and is arguably one of the highlights of the team at the moment, even if it is at this stage faint praise.

“They’re getting better each week. They’re continuing to take steps, and that gives me a lot of confidence back there”, quarterback Mitch Trubisky told reporters yesterday, via the team’s website. “We’ve got to continue to get better in every position group, [but] the offensive line has done a great job. I think their chemistry has really shown, their communication upfront, and they’ve taken steps week after week. They’re gonna be the heart and soul of our team, and you love to see that as a quarterback”.

The most solid and consistent lineman the Steelers have had, really for going on two seasons now, has been right tackle Chukwuma Okorafor, who has developed into a solid starter, with a strength in pass protection.

Center Mason Cole of the two free agents signed had the easiest transition, and has been a largely steady presence as well, but quite arguably the other free agent, right guard James Daniels, is quickly establishing himself as the best of the group.

Kevin Dotson, the only one out of the group aside from Okorafor who has been with the team for more than a year, is also beginning to solidify himself at right guard after missing half of last season due to injury, while left tackle Dan Moore Jr. has offered more stability than any other point of his offseason would have indicated.

One rather logical explanation for why the group has come together now rather than earlier in the offseason is for the fact that they had to adjust to a new offensive line scheme under Pat Meyer, who was hired this year as the first fully outside line hire since Mike Munchak in 2014.

Of course, time playing together is another big component, and doing that in the regular season is the best way to gel. One imagines that the more games they get under their belts working with the guys next to them, the more and more comfortable they will feel and the more coordination with which they’ll be able to play.