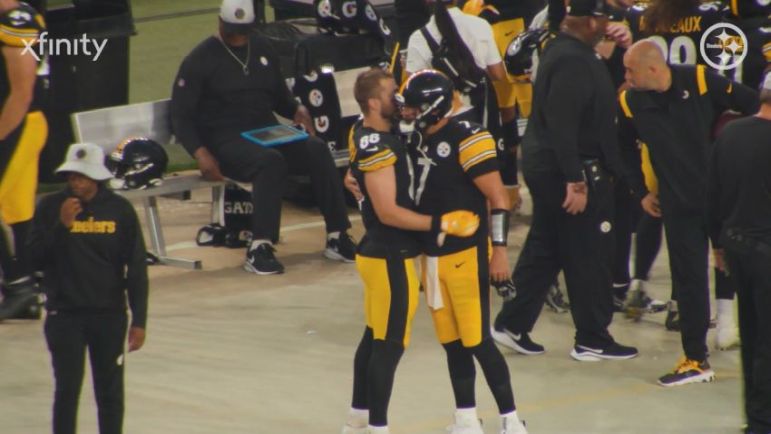 Ben Roethlisberger’s always said he’s comfortable with his decision to retire. And to this day, he stands by that. But if there’s one regret he has about moving on with life’s work, it’s not getting to play more with TE Pat Freiermuth.

Roethlisberger discussed Freiermuth during his most recent episode of his Footbahlin podcast.

“I only got to play one year with him and I hated it. I wish I could’ve had more years with him,” Roethlisberger said of Freiermuth. “What I saw in him and see in him is a guy who loves the game, he’s a team-first guy. He’s a guy who will give you everything he’s got. He’s going to put his head down, stay inbounds. Get those extra yards when he can. He’s going to be mad when they lose even if he catches 500 yards and be happy if he has no catches. That’s just who he is.”

Freiermuth made an immediate impact as a rookie, catching 60 passes – a record for a Steelers’ rookie tight end – for 497 yards and seven touchdowns. He functioned as the team’s security blanket, especially once JuJu Smith-Schuster was lost for the rest of the regular season. It’s one reason why his yards per catch was so low, 8.3, though his downfield role has expanded this season, averaging 15 yards per catch in Sunday’s opener against the Bengals. He had the key catch in the win, a 26-yard reception on a scramble drill to set up Chris Boswell’s game-winning kick.

Coming out of college, Freiermuth drew plenty of comparisons to Heath Miller, who Roethlisberger said was one of his favorite teammates to play with. Roethlisberger also retold the story of then-Tampa Bay head coach Bruce Arians texting him when the Steelers drafted Freiermuth, saying Freiermuth was the closest thing to Miller that Arians had ever seen. Both have similar personalities, quiet and low-maintenance with a trusty pair of hands. Freiermuth will have to improve as a blocker though to fully reach Miller’s status.

After years of rotating tight ends trying to find the answers, Ladarius Green, Vance McDonald, Eric Ebron, they’ve found stability and a future in Freiermuth. Pittsburgh has a solid right end room with Freiermuth as the starter and blocker Zach Gentry as the #2, who had a long gain on a tight end screen against the Bengals. But for Roethlisberger, Freiermuth will be a fixture in this offense, just as Miller was.

“He’s going to be fun to watch for a long time.”

Check out the full episode of the podcast below.