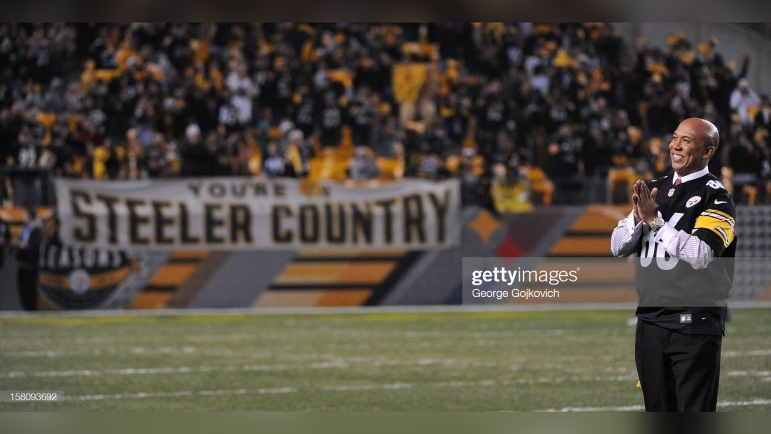 Former Pittsburgh Steelers wide receiver Hines Ward will always be acknowledged as one of the greats of the franchise, and always associated with Pittsburgh, no matter where he goes. At the moment, he is the head coach of the XFL’s San Antonio franchise, and has been an offensive assistant coach in the NFL, with Pittsburgh’s next opponent coincidentally enough, the New York Jets. And it was weird, he recalls.

“It was kind of like the Twilight Zone. You remember the old TV show, The Twilight Zone? You wake up and you’re in a weird room or something”, he told Rob Maaddi on the AP Pro Football Podcast. “For me, I just never don any other color than the black and gold”.

Drafted in the third round out of Georgia, born in Seoul, South Korea, Ward has lived a lot of life outside of Pittsburgh, but his time in the Steel City from his selection in the third round of the 1998 NFL Draft through his final season in 2011 defined his legacy, one he couldn’t escape even if he wanted to.

Nevertheless, he finds himself quite grateful to have had the opportunity to work inside of the Jets organization, because he believes that it profited him as a coach as he continues to pursue his ambitions in this next chapter, acknowledging that he would like to be an NFL head coach.

“It was a great learning experience for me to be a part of another organization to see how they did things, and I learned a lot, even though we didn’t have success, record-wise”, he recalled of his time with New York in 2019-20. He spent the 2021 season coaching wide receivers for Florida Atlantic University before landing his latest opportunity in the XFL.

“It was just so valuable an experience for me going to another organization, seeing how they do things”, he added. “I think it helped me in my development and growth as a coach. Because I had never gone through a losing season like that where you haven’t won a game and it was late in the year, you’re 0-13, and the players are looking at the coaches seeing how you guys respond”.

Ward actually went through two losing seasons in his first two years in the NFL, the Steelers going 7-9 his rookie year and then 6-10 in 1999, but that is as bad as it would get. They also went 6-10 in 2003, but that merely served to land them Ben Roethlisberger.

Although their relationship had some bumps in the road, it was prolific and productive on the field, and there is no mistaking that there was a tremendous amount of professional respect between the two. Indeed, in the same interview, he likened some of Roethlisberger’s excellent qualities, including his leadership and poise, to the team’s new quarterback, rookie first-round pick Kenny Pickett.

The Steelers faithful will always have great love for Hines Ward in Pittsburgh, and the feeling very much appears to be mutual. A member of the 2019 class of the organization’s Hall of Honor, he’ll never feel like Henry Bemis here, even if he’ll have to get used to the name Acrisure Stadium.