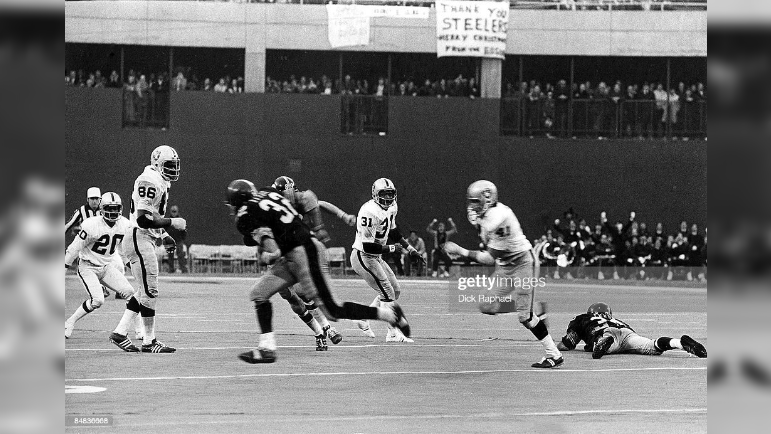 Oftentimes in a moment filled with a ton of adrenaline, the body and mind can tend to blackout while still functioning, causing people to forget what happened in such a euphoric moment.

Turns out, that happens to be the case for Pittsburgh Steelers legendary running back Franco Harris and the Immaculate Reception.

Harris, who will have his No. 32 jersey retired against the Las Vegas Raiders on Dec. 24, 2022 at Acrisure Stadium just a few days past the 50th anniversary of the Immaculate Reception, stated to former teammate and current Steelers’ radio color analyst Craig Wolfley that he doesn’t remember a thing after catching the football, which is a bit surprising considering he ran 43 yards to the house with the football, defeating the Oakland Raiders in the AFC divisional playoff game, 13-7.

“I watch the film, because I remember nothing…I don’t see the collision. I don’t see the ball, I have no memory of nothing,” Harris said to Wolfley in a 1-on-1 segment for Steelers.com following the Steelers announcing Harris’ jersey would be the third retired in franchise history with Ernie Stautner’s 70 and Joe Greene’s 75.

What Harris does remember though, is the celebration on the field, and one little interesting nugget that gets talked about a ton, that being Steelers founder and owner Art Rooney Sr. missing the entire play while in the elevator, heading down to the locker room to console his players after what he believed was going to be a loss to the rival Raiders.

“Oh my gosh. There was pandemonium, right? I mean, the field was insane and people kept jumping on the field, jumping on the field and,  like, to me, that kind of makes the play also. It’s amazing,” Harris said to Wolfley, according to video via Steelers.com. “…As the story goes, he’s [Art Rooney Sr.] going down to the locker room to console us saying, ‘Hey, good season’ and he’s thinking that we lost. And so, he’s on the elevator, when I understand he hears this roar, you know what I mean?  He got on the elevator losing and came off. We won.”

Imagine being Art Rooney Sr. in that moment? You want to talk about not only a range of emotions, going from heartbreak to elation, but also missing one of the greatest plays in NFL history by the team you founded and owned, went through plenty of trials and tribulations to become competitive because you were in the elevator? Man! That’s tough.

"I am blown away."@francoharrishof talks with Craig Wolfley about his number 32 being retired by the team, the Immaculate Reception and more. @84LumberNews pic.twitter.com/MdMSjdL8SO

Still, it’s pretty remarkable that Harris can recall the celebration on the field, fans jumping out of the stands, teammates swarming him and celebrating the stunning win in the playoffs on home field at Three Rivers Stadium. He can also remember that “The Chief” didn’t see it live, but he can’t actually remember catching the football or racing to the end zone.

The human body and mind sure are fascinating things.