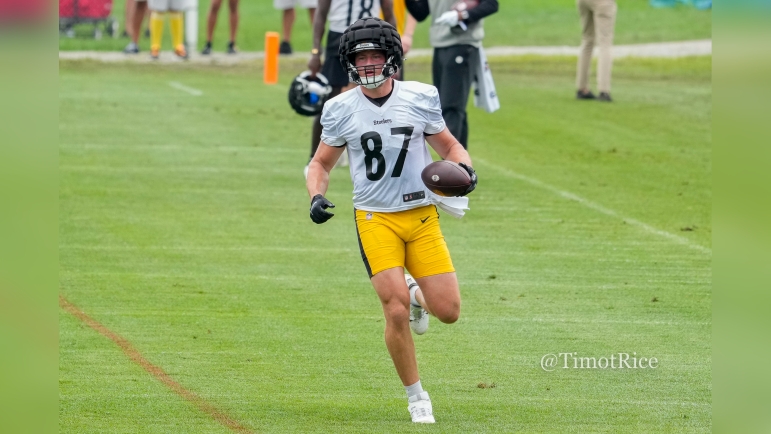 The Pittsburgh Steelers had become very familiar with Kevin Rader over the course of the past several seasons. A Pine-Richland graduate, he first signed with the team in 2019 as a Reserve/Future player in January that year. Outside of the occasional cuts, he had spent the rest of his time with the organization until this past week.

Now they have a former Steelers tight end, and one whom you could certainly make the case merits a roster spot of some kind. He has spent long stretches on the 53-man roster for the Steelers the past two years, and at least before the 2022 NFL Draft, he was expected to make the team.

Pittsburgh has rebuilt its tight end room since Rader first signed in January of 2019, however. That same year, they drafted Zach Gentry in the fifth round. Two years later followed Pat Freiermuth in the second round. Back in April, they drafted Connor Heyward in the sixth round, an H-back who has assumed the third tight end spot on the 53-man roster.

It is unknown if the Steelers offered Rader to sign to their practice squad or not. As is always the case, both the player and the team have to agree on a deal. It is entirely possible that he saw that this was the end of the road with Heyward making the team, and that it was time to look for a fresh start elsewhere.

The team did sign Justin Rigg to their practice squad, however, a 6’6” rookie college free agent out of Kentucky. Rigg originally signed with the Cincinnati Bengals after the 2022 NFL Draft, but did not make the final 53-man roster.

Rader dressed for six games last season after Eric Ebron was lost for the season, promoted from the practice squad to the 53-man roster to serve as the third tight end. He played 36 snaps on offense and 37 on special teams.

Perhaps not in accomplishment, he does seem to fit the profile of what Vrabel would want. He has the frame to be a blocking tight end and he is capable of being a plus contributor on special teams, which is why many believed he would earn a roster spot with the Steelers this offseason, at least until Heyward was drafted.