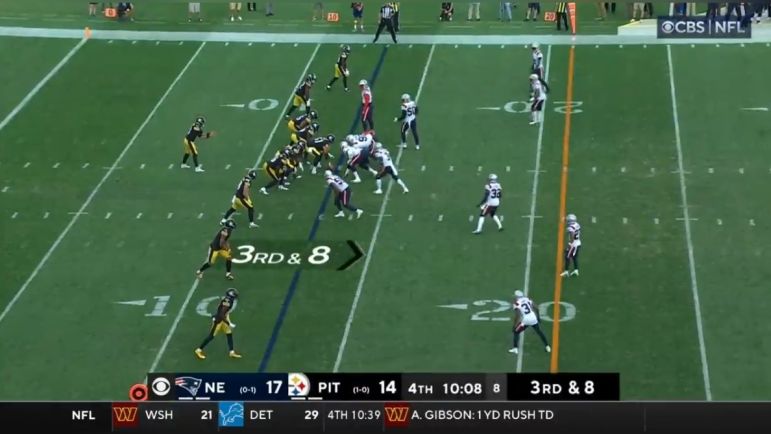 Like most losses, there was plenty of blame to go around for the Pittsburgh Steelers dropping their first game of the year. Players didn’t execute well enough. The other team made more big plays. And coaching didn’t always help. It’s important to take all of that into account.

But for this article, I want to focus on the coaching errors the Steelers made Sunday. Stuff I’d put less on the players and more on coaches not putting Pittsburgh in the best positions to succeed. There’s always grey area and interpretation but these are things I’d put around unsound scheme more than anything else. It comes on all three sides of the ball, offense, defense, and special teams.

1. For this article, I only have one “error” for the offense but I’m doing a long breakdown tomorrow morning that details errors/issues with Matt Canada and his system and the mistakes/errors Mitch Trubisky made. So if you want more to be mad out, wait until tomorrow.

What we’re talking about here is the Steelers’ 3rd and 8 play in the fourth quarter. Pittsburgh motions Najee Harris out wide to an empty set. Matthew Judon rushes free off the edge and Trubisky throws hot to Najee Harris in the left flat, quickly tackled, stopped, and the Steelers forced to punt.

What I hate here is going empty. It’s not something you should do against the Patriots. They live off empty sets and their ability to stress and wreck pass protections off it. Watch how the Pats respond to the Steelers motioning to empty here. They show a six-man potential pressure with five blocking. That forces the Steelers’ line to pinch and take the innermost threats. Here’s how the blocking is drawn up. 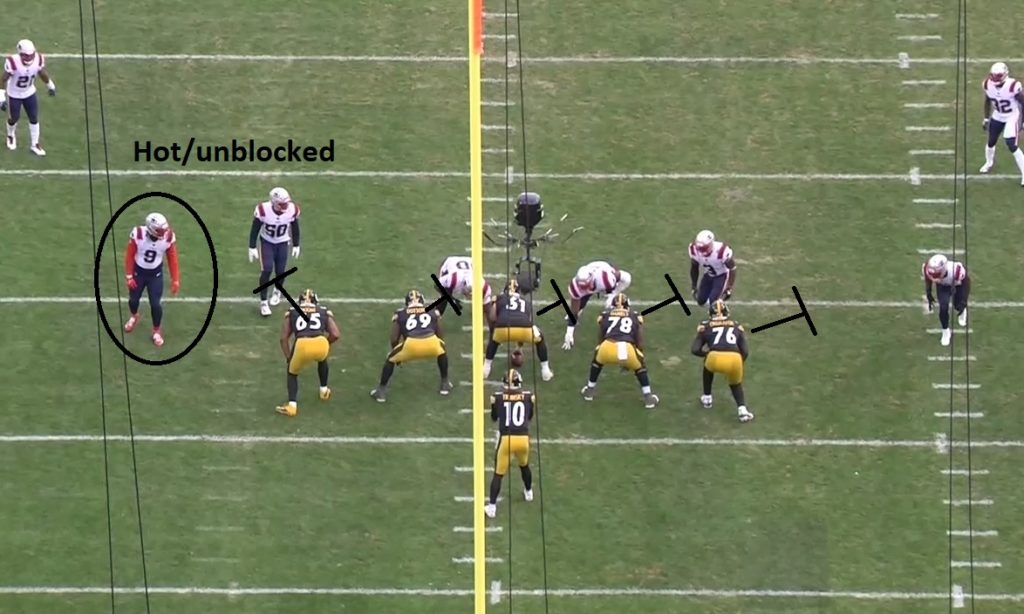 You don’t know exactly who is rushing and who isn’t but you have to account for potential threats. On the snap, the left side of the Patriots’ rush (the Steelers’ right side) drops out and they bring pressure from the opposite side. LT Dan Moore Jr. has to work inside-out, taking the LB rushing into the B gap. That leaves ROLB Matthew Judon with a free path to Mitch Trubisky. 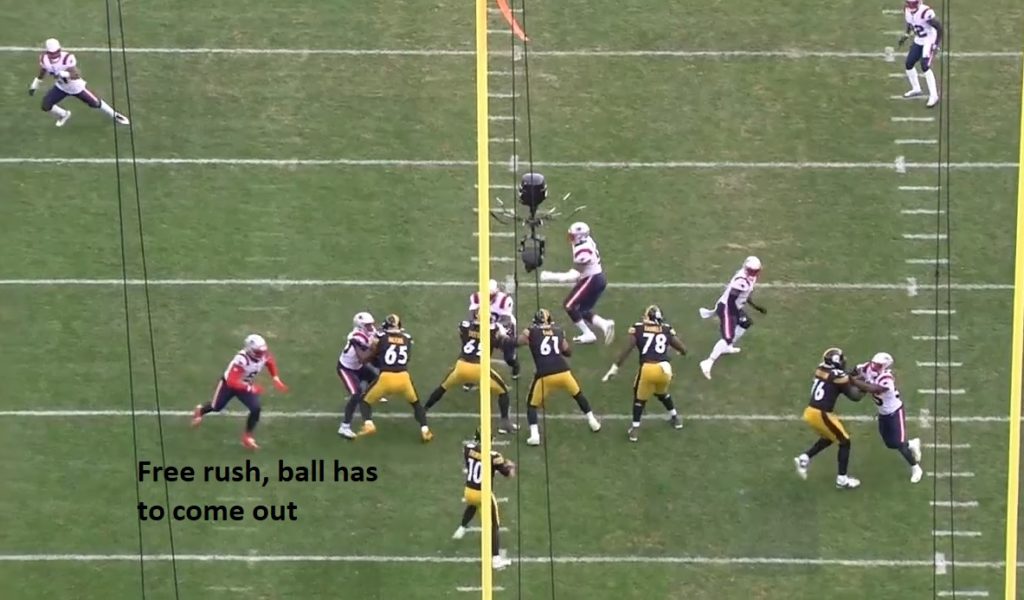 He’s forced to throw the ball out quick short of the sticks on 3rd and 8, not ideal, and Harris is quickly tackled. Now, you can argue Trubisky’s decision here, not hitting Pat Freiermuth like you’ll see below, but pressure forces quarterbacks into immediate and oftentimes less-than-ideal choices.

Canada shouldn’t have had the back motion out. They rarely went empty in this game and doing so in this big spot was a poor decision.

1. Gunner Olszewski’s muffed punt was bad enough and no doubt put Pittsburgh in a bad spot. But the Steelers’ personnel grouping help lead to the Pats’ game-clinching score. On third and goal, the Pats come out in 22 personnel with two running backs on the field, Damien Harris and Rhamondre Stevenson. There’s only one WR out there in Lil’Jordan Humphrey, a big guy who ultimately aligned as a wing. For some reason, the Steelers respond to this grouping with their 3-3-5 nickel defense, playing with three cornerbacks: Levi Wallace, Cam Sutton, and Ahkello Witherspoon.

Harris barrels forward and into the end zone. I have no idea why Pittsburgh employed this grouping on the goal line. New England subbed the play before, 11 to 22 personnel, meaning the Steelers were afforded the chance to sub, too. But they didn’t make any change. Zero subs. A foolish decision on an important down. Didn’t put this defense in position to make the stop.

2. Really didn’t like how the Steelers closed the game out. For obvious reasons, a 13-play drive as New England ran out the final 6:55 of the game. But the playcalls on the final two runs were frustrating. Pittsburgh used its 3-3-5 defense with an over shift/front. It’s been something the team has used for years, sometimes with good success, but the weakness is clear. Teams who run away from the over front take the right approach. Don’t run into the belly of the beast.

On the final two runs, that’s what the Patriots did. Twice, Pittsburgh shifted to their over front and both times, the Pats ran weakside. The downside to that is having fewer blockers on that side but New England compensated for that with their gap scheme, pulling from strong to weak and adding numbers while reaching and cutting off the Steelers on the backside of the play. Each play, the center and guard execute a fold block, the center snapping and pulling and the left guard blocking down against the one-tech in the over front.

As you’ll see in each clip, the Steelers are chasing backside the whole way as RB Damien Harris gets downhill. LB Myles Jack is cutoff each time by the puller and can’t get off the block to make the tackle, a tough spot for him to be in. Each play looks very similar and the second run seals the Patriots’ victory.

This is what the Detroit Lions did to the Steelers last year. Running away from the over front. Didn’t like the Steelers’ decision to use it, especially on the second snap after giving up a good run initially.

1. An obvious one. Having only ten players on the field during Gunner Olszewski’s muffed punt. No jammer to the top of the screen gives him free access to Olszewski, who lets the punt hit off his facemask and recovered by the Patriots. 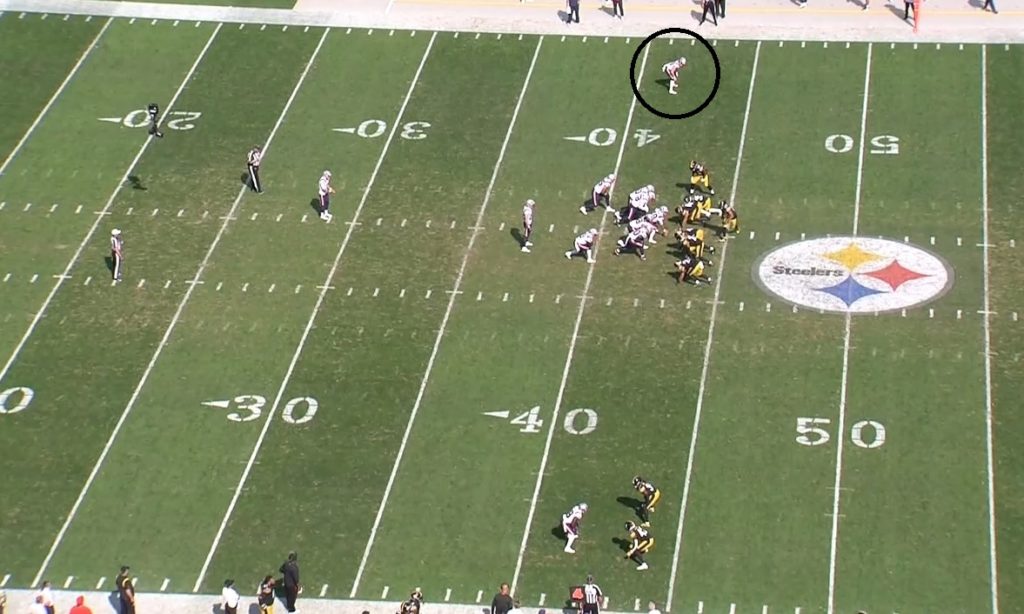 So who’s missing? CB Levi Wallace, on the field for every other punt except this one. Didn’t look hurt, moved around just fine during the third down incompletion that preceded this. The only interesting thing was that on every other punt, James Pierre was singled up on a gunner with Wallace and Terrell Edmunds vicing the other, the legendary special teams ace Matthew Slater. Doubling Slater makes sense but I wonder why Pierre didn’t walk over to the other gunner like he had.

Regardless, the Steelers were one short and the gunner had a free release. It’s almost surprising the Pats didn’t run a fake pass off this. Some teams have built-in checks to throw the ball if a gunner is uncovered. But it was a close game and I don’t know what the Patriots checks are and if they have trust in their punter to make such a throw.

Watching the play unfold, I wonder if Mike Tomlin was about to call a timeout. Watch him begin to walk towards the ref right before the snap. Hard to tell but I think he noticed the error late. Also check out assistant WRs coach Blaine Stewart, who assists on special teams, realizing there was no jammer just before Olszewski fumbles. He looks back as if to say, “who are we missing?” 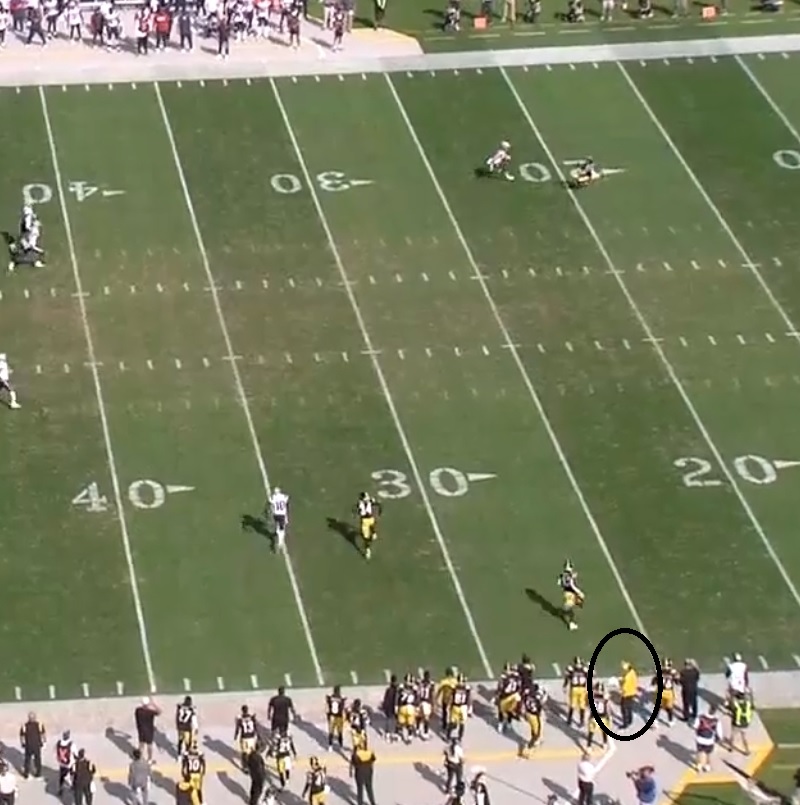 Speaking yesterday, Mike Tomlin put the blame on players and sure, they have to be held to account. Levi Wallace should’ve been on the field. I don’t know why he wasn’t. All he had to do was just stay on the field. But I put that on coaches too. They have to be aware if the right people and in this case – enough people – are on the field. That’s part of the job. Get the right personnel out there. That didn’t happen here and I put that on STs Coordinator Danny Smith. This was a failure of players and coaches.