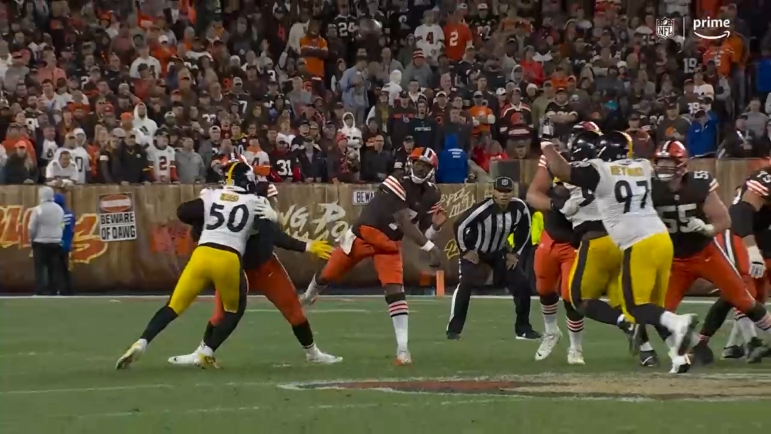 The Steelers went on the road and fell to the Cleveland Browns Thursday night, losing 29-17 in an AFC North divisional matchup. While the offense showed signs of life in the second quarter of this matchup, the unit sputtered out in the second half and put pressure on the defense to once again try and carry the unit to victory against a talented Browns’ rushing attack.

The defense ended up getting gashed on the ground in Cleveland, surrendering 171 yards on 38 carries to the dynamic duo of Nick Chubb and Kareem Hunt. QB Jacoby Brissett was also efficient as a passer, completing 21-of-31 pass attempts for 220 yards and two TDs with zero INTs while taking two sacks.

One player to watch in this matchup was OLB Malik Reed, now starting his second contest after T.J. Watt injured his pec in Week 1 against the Cincinnati Bengals. Many wondered how the former Broncos pass rusher would hold up in attempt to replace the production of the reigning Defensive Player of the Year until he would return to the lineup. Thus far, Reed hasn’t been awful by any means, but his performance has been uninspiring, especially in the pass rush department.

Reed established himself as a quality backup/spot starter in Denver before getting traded to Pittsburgh, notching 11TFLs, 13 sacks, and three forced fumbles the last two seasons where he has started 26 games. However, watching Reed play against the Browns, you see a lot of physical deficiencies that limit his impact as a pass rusher. He’s listed at 6’2, 235lb and has shorter arms, making it difficult for him to keep blockers off his frame and disengage from blocks. He also lacks initial burst off the snap as we see on this pass rush rep against #78 Jack Conklin, being a tad slow out of his stance as he tries to round the corner but doesn’t get much pressure as Brissett completes the pass.

As a run defender, Reed has been up-and-down in terms of his performance. When it comes to effort in pursuit, no one should be questioning Reed’s motor to try and get in on the play. Here on the very first defensive snap of the game, we see Reed set the edge and gets hands on #85 David Njoku before seeing #24 Nick Chubb take the run up the middle. Reed then works across Njoku’s face and wraps up Chubb’s legs, dragging him down to the ground for a minimal gain on first down.

For being a smaller outside linebacker, Reed has done an admirable job at setting the edge and forcing runs back inside. Check out this outside zone run where Reed attacks outside shoulder of Conklin on the snap, getting the RT to turn his shoulders as he holds outside contain then works across the blocker’s face back inside to wrap up #27 Kareem Hunt while engaged with Conklin, keeping an arm on his backside as the rest of the defense rallies to the ball and Reed swings Hunt down to the ground.

Reed’s effort at setting the edge and not allowing Chubb and Hunt to get to the sideline was commendable Thursday night as the OLB did a great job not allowing blockers to reach block him and seal him off to lose outside contain. Here’s another rep where Reed fights to win on the outside shoulder of Njoku, extending his right arm to seal the edge and force Chubb to cut back inside as Reed and the rest of the defense rallies to take him down for a modest gain.

Still, there was a couple of instances where Reed would play himself out of position on the edge like this outside run by Hunt where Reed crashes cheats too far inside as Njoku seals the edge, allowing Hunt around the corner with a blocker out in front. Hunt cuts back inside as the guard picks up #25 Ahkello Witherspoon, allowing Reed and the rest of the defense to converge on him and make the tackle.

The drop off from Watt to Reed in terms of athleticism and instincts also came into play on a few occasions Thursday night against Cleveland. One example came on this scramble by #7 Jacoby Brissett where Reed stays home to pick up the potential dump off pass to Njoku at the LOS but fails to keep outside contain as Njoku runs into Myles Jack’s zone, leaving the right sideline wide open for Brissett to take off and run. Reed did right by being ready for the dump off pass, but should peel off to Brissett with Jack in the same coverage area.

Finally, Malik Reed may play with great effort both as a run defender and pass rusher, but his limitations can hurt him in terms of making routine plays. For example, Reed does a good job here setting the edge then pursuing the football once Chubb breaks the LOS, but when he tries to take Chubb down, he leaves his feet, drops his head, and doesn’t complete the wrap up, lacking the stopping power to knock a powerful runner like Chubb off his feet who bounces off the tackle and proceeds to pick up an additional ten yards from the spot of the tackle attempt.

Malik Reed finished the night with two combined tackles (one solo) on 57 defensive snaps (79%). He wasn’t terrible in terms of run defense, but the occasional mishap against the ground game as well as the lack of getting any pressure on the QB as a pass rusher is disappointing for a player that has been tasked with filling in for a player of Watt’s caliber until he returns. Reed shouldn’t be expected to match what Watt does on the football field, but he should be able to generate some pressure on the edge which he hasn’t succeeded at thus far.

The Steelers head into Week 4 on a two-game slid after sneaking out a win against the Bengals Week 1, needing its defense to generate more pressure in the pass rush department as the offense looks to establish some sort of consistency in moving the football. Thus, only more pressure will be put on players like Reed to step up and lead the charge on defense as the offense continues to search for some sort of identity in the coming weeks.

What are your thoughts on Malik Reed’s performance against the Cleveland Browns? Do you think he represented himself well, or are you in the camp that he needs to do more in-place of T.J. Watt? Please leave your thoughts in the comments section below and thanks again for reading!