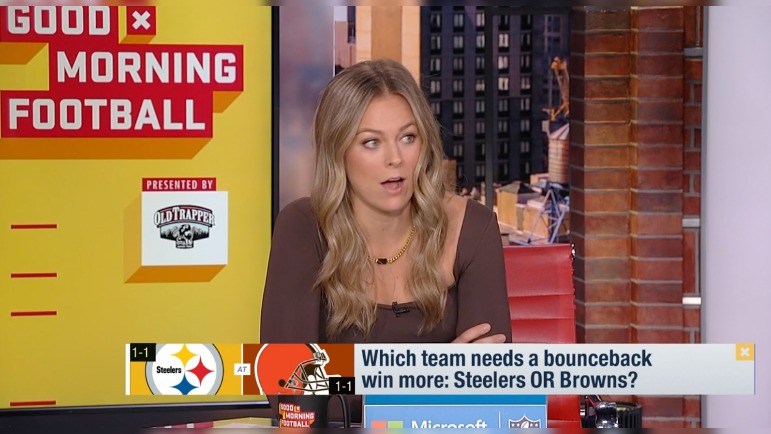 On Thursday morning on GMFB, which aired on NFL Network, the cast debated the topic of whether the Cleveland Browns or the Pittsburgh Steelers need a bounce-back win more after both took losses last weekend. The Browns lost a heartbreaker to the New York Jets last Sunday, falling by a score of 31-30 after New York pulled off a 14-point comeback with only 1:55 remaining in the fourth quarter. Pittsburgh, on the other hand, lost to the New England Patriots 17-14 in a game where the team’s lack of offense left them without a first down in the final quarter of play as New England controlled the clock and ran out the game for the win.

While most of the table agreed that Cleveland needs to have this win more after sustaining such a horrific loss at home where they had the game pretty much put away, Jamie Erdahl decided to be contrarian and choose the Steelers, who are going through an identity crisis on offense to start the 2022 season.

“Don’t put this all on Mitch Trubisky’s shoulders,” Erdahl said on GMFB regarding the Steelers. “They have to find options outside. They have to feature Najee Harris more. What is the identity of this Pittsburgh Steelers’ offense before you start looking at the quarterback position? It is a wholesale issue I think in terms of what we saw last week against the Patriots. They have to find a direction if they are going to be the Steelers that we know and that we trust to be a team that makes the playoffs the last 18 years.”

Erdahl has a point in the fact that the offensive woes the Steelers have had the first two weeks to start the regular season far surpass Trubisky at QB. The offensive line took strides last week against New England, but still need to play far better than they have to help establish some semblance of a running game. Najee Harris isn’t at fault either, having tried several times last week to try and bounce runs outside rather than hitting the hole that was blocked for him. OC Matt Canada appears to be outmatched in his play-calling as he runs a fairly bland offense that executes the same plays with little variety or flavor to keep opposing defenses guessing.

Still, Trubisky shouldn’t be abstained from all guilt, as his reluctance to hit open receivers down the field and resort to checking it down or dropping his eyes in the pocket has left plenty of opportunities on the board Pittsburgh wished they would have had. He has been inaccurate at times with the football, throwing his pass-catchers out of bounds or putting the ball high above the intended target’s head, preventing him from being able to make a catch.

Regardless, the blame falls on all parties involved on the offensive side of the football. No one player or coach is executing at a level that is going to uplift the entire unit, meaning the offense as a whole needs to raise its level of execution and consistency on a down-to-down basis to ensure improvements can be made going forward. We’re still early in the 2022 season, but the Steelers need to look long and hard in the mirror if they want to see the results change in terms of offensive production.