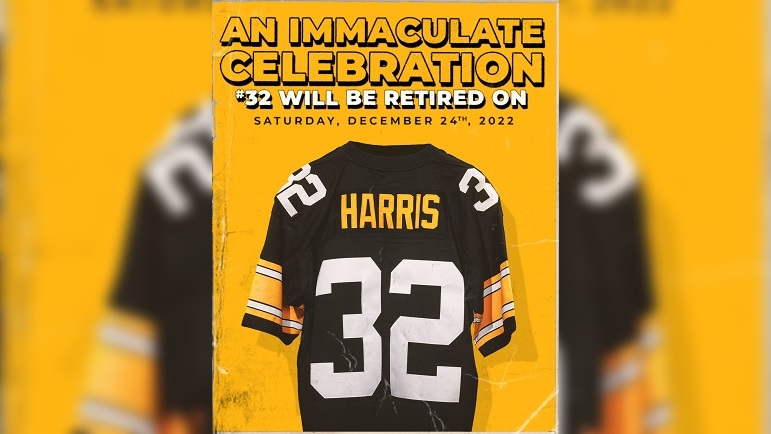 Rooney said the jersey will officially be retired on Christmas Eve during the team’s game against the Las Vegas Raiders marking the 50th anniversary of the Immaculate Reception.

#Steelers President Art Rooney II just announced that @francoharrishof's No. 32 will be retired by the team at halftime of our Week 16 game against the Raiders. pic.twitter.com/5KYLOxVLsR

Rooney said the team will wear a commemorative patch during the game to mark Harris’ jersey retirement.

The Steelers will wear a special commemorative patch for their home game against the Raiders when Hall of Famer Franco Harris' number 32 is retired. What a great moment that will be. #Steelers #NFL

Moments ago, the Steelers’ Twitter account shared a photo of Rooney and Harris with the special patch on the jersey, showing Harris making his famous Immaculate Reception catch.

In a team press release announcing the move, Rooney spoke to Harris’ impact.

“My Grandfather was once quoted as saying: ‘Before Franco got here, we didn’t win much, since he got here, we don’t lose.’ I think that sums it up pretty good. Franco’s impact on the franchise would be hard to overstate. That is why I think it is fitting and appropriate that we recognize Franco’s remarkable career by retiring his Number 32 at our game on December 24.”

Harris’ 1972 Immaculate Reception is one of the most iconic plays in football history and began to shift the tide of Steelers’ history from lovable losers into a Super Bowl dynasty. Though Pittsburgh didn’t win the Super Bowl that year, it proved they could compete with teams like the Raiders and in 1974, the team hoisted its first Lombardi, the first of four they’d win that decade.

Harris was a central part of the Steelers’ success. Drafted out of Penn State in 1972, Harris spent 12 years in Pittsburgh. He rushed for over 12,000 yards and had exactly 100 total touchdowns, 91 rushing and another nine receiving. He was named Super Bowl MVP in the team’s first championship, rushing for 158 yards and the game’s only touchdown in a 16-6 win over the Minnesota Vikings.

For his career, Harris made nine Pro Bowls, one All-Pro team, and was inducted into the Hall of Fame in 1990. He was also named the league’s Offensive Rookie of the Year in 1972.

Since retiring, he’s remained a positive presence for the Steelers’ organization, showing up at events and announcing several draft picks, including Pat Freiermuth’s selection last year.

Harris will now join Statuner and Greene as the only players to officially have their jerseys retired. Stautner’s occurred in 1964 while Greene’s happened in 2014. Harris is now the first player on the Steelers’ offense to have his jersey number retired. Previously, Harris’ #32 joined a long list of “unofficially retired” jerseys that hadn’t been issued since Harris hung up his cleats. The 50th anniversary of the Immaculate Reception is a perfect chance to do so, and this is a great move by the Steelers’ organization.

We’ll update this post with quotes throughout the afternoon but Harris is speaking to the media now, calling the move an honor.

"What an honor it is for me to have my #32 jersey hanging alongside the great Ernie Statuner, and my longtime friend and teammate, Joe Greene" – Franco Harris

Franco Harris on the legacy of the Immaculate Reception continuing

"It's hard to believe it's been 50 years. That's a long time. To have it alive, and still thrilling–it really says a lot and means a lot."

Hall of Famer Franco Harris on the legacy of the Immaculate Reception continuing all these years later: "It's hard to believe it's been 50 years. That's a long time. To have it alive, and still thrilling–it really says a lot and means a lot." #Steelers #NFL