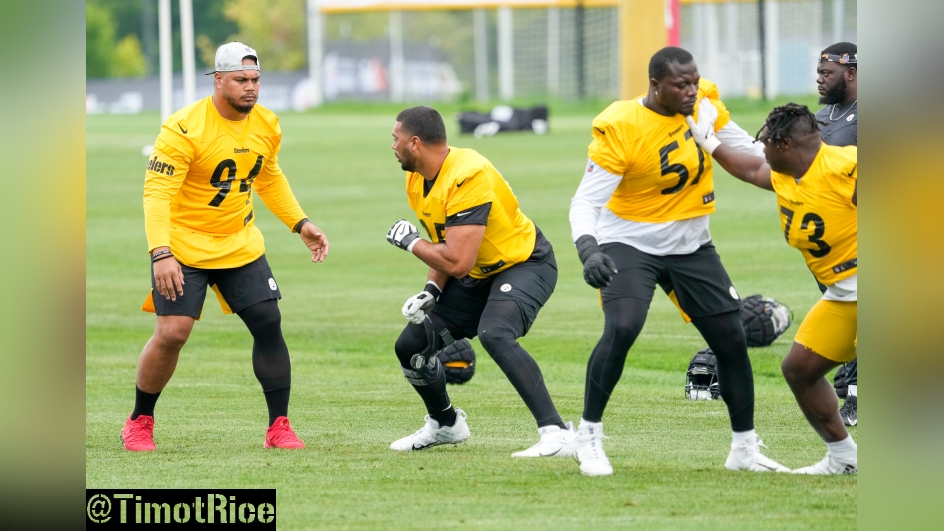 It came as a bit of a surprise Tuesday morning when the Pittsburgh Steelers announced via an updated depth chart that veteran nose tackle Tyson Alualu was replaced in the starting lineup by Montravius Adams, at least in base 3-4 formation.

It was a surprise in the sense that the Steelers made a change there, rather than at some other positions. However, the play on the field from the two clearly showed the change was needed, as Adams has outplayed Alualu to this point in the season and has offered more as a run defender. That led to the switch, sending the 35-year-old Alualu into a reserve role.

For Steelers defensive captain and close friend of Alualu, Cameron Heyward was a bit surprised by the move as well. That said, speaking with reporters Thursday from the locker room at the UPMC Rooney Sports Complex on the South Side, Heyward said it doesn’t matter who is the starter because both guys will contribute and will need to be ready to go to help the Steelers in their business, which is winning.

“Montravius is a great player. We were very lucky to get him when we got him last year,” Heyward said to reporters Thursday, according to video via Steelers.com. “He’s coachable. He’s always trying to learn. He’s cat-like quick, and he can get off blocks to make plays with good hands.

“Ty’s [Alualu] my guy and, you know, I never thought it was gonna be this thing where they were going back and forth, but both guys will contribute on Sunday, no matter what. It doesn’t matter who’s starting. Both guys will play,” Heyward added, according to video via Steelers.com. “You don’t want to hear that as a veteran, but those are the cards that we’re dealt. I don’t make decisions. I’ll make sure both guys are ready to go, and the game is winning football and we just gotta get back to that.”

As Heyward pointed out, the Steelers were very lucky to get their hands on Adams the way that they did last season, signing him off of the New Orleans Saints’ practice squad and placing him on the 53-man roster due to injuries in the trenches. Adams, to his credit, took that opportunity and has run with it, working his way into the starting lineup while playing rotational snaps on a very talented defense as part of a good front seven overall.

Montravius Adams admits he didn't know a single play when joining the team mid-way through last year. He credits Cam Heyward for helping him through. #Steelers

"Cam can tell me every play with me not knowing one.”https://t.co/jlC9c2PXGb

Heyward knows how good Adams is and can be, but it’s definitely tough for the veteran leader to see a close friend losing his starting role and seeing his impact being diminished a bit, especially coming back from injury. That’s the NFL though, and Heyward knows it. It’s about winning, and Adams provides the Steelers’ defense with a better chance of winning games right now than Alualu does.

Both guys will undoubtedly play and see snaps on Sunday in an effort to keep other defensive linemen fresh. How well Alualu adapts to the change in roles will be something to monitor, as will Adams’ impact in an elevated role against a New York Jets offensive line that is rather banged up across the board.