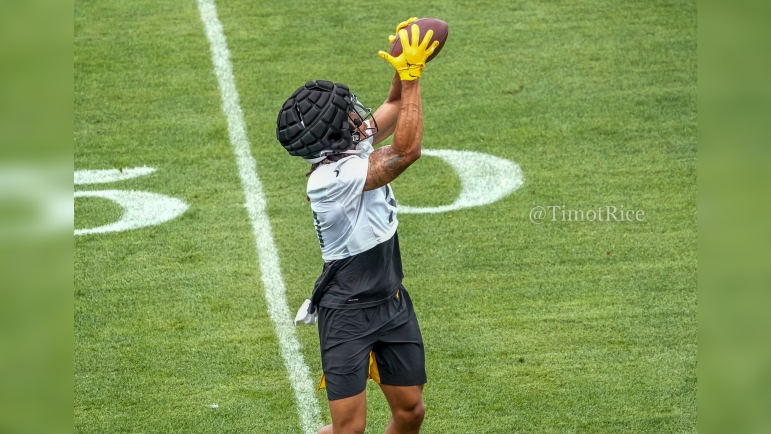 In any given press conference, Bill Belichick isn’t a man of many words. But ask him about the threat Chase Claypool brings this weekend and Belichick opens up with one eye-catching comparison. Speaking to reporters today, Belichick made a loose comparison between Claypool and one of Belichick’s best players, TE Rob Gronkowski. He outlined what makes Claypool a threat.

Claypool is one of the league’s biggest receivers with great tools, a true height/weight/speed player with the ability to win contested situations. He made one ridiculous catch last week, somehow reaching back for the ball one-handed and pulling in a snag to move Pittsburgh closer to the goal line on a drive that ended up in the end zone.

Belichick expanded on all the ways the Steelers use Claypool.

“They use him in a variety of ways. Down the field, catch-and-run plays, hand him the ball. He’s a big, physical player…hard guy to tackle. Downfield receiver in addition to a short and intermediate receiver. Tough matchup.”

Claypool played out of the slot in Week One, kicking inside after primarily working as the team’s “Z” receiver his first two seasons. But the offseason loss of JuJu Smith-Schuster coupled with the selection of rookie George Pickens, who fits that “Z” role well, moved Claypool inside in 11 personnel. His size and strength can be a matchup problem against smaller nickel corners while the team can still work him vertically on chop routes (what they call slot fades). As Belichick noted, Claypool saw extensive work in the run game against the Bengals, carrying the ball six times for a team-high 36 yards. They used him on perimeter jet runs and when he gains the edge, he can be tough to bring down in space.

While Claypool isn’t actually Gronkowski, and Belichick wasn’t making a 1:1 comparison, they were gifted athletes and matchup nightmares from a size/usage standpoint. Gronk could hurt you in every way possible. Run down the seam for a big catch. Run short, break two tackles, and pick up a ton of YAC. Block your butt off in the run game. Times where the defense simply had no answer. The Steelers felt that as much as anybody. Gronk had eight career touchdowns against the Steelers, the most of any non-divisional opponent and just barely trailing the Jets and Dolphins, who each gave up nine to him during his career.

Claypool has potential to make those types of plays. This summer has shown he’s found more consistency and maybe more maturity and will be a key cog in Pittsburgh getting their offense going this weekend versus New England.