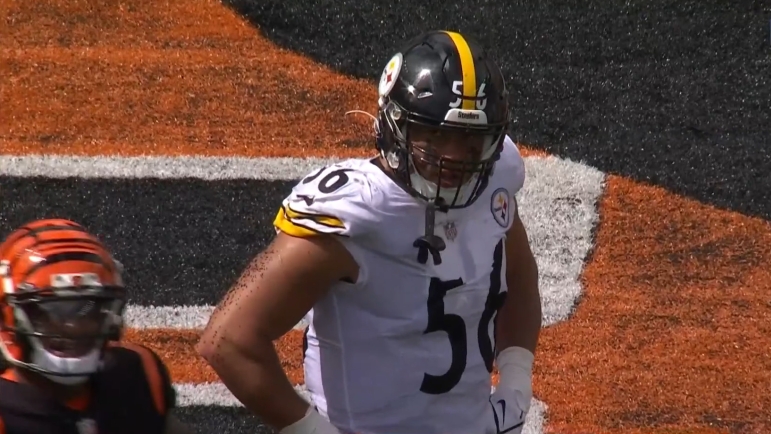 Every player who makes it to the NFL has their own story about how they got there. Some of them grew up to be football players, even had fathers who were successful NFL players. Marvin Harrison’s son, for example, is in college wearing Gucci cleats and Apple watches on the field. Others have to wonder if they can earn a scholarship as a walk-on just so they can attend the university and see it through for the full ride.

The latter is Pittsburgh Steelers outside linebacker Alex Highsmith’s story. You probably know about his background a little bit, I’m sure, about how he was a walk-on player at Charlotte, a small school that is not exactly an NFL powerhouse. But he told Aditi Kinkhabwala yesterday that he never doubted his NFL dream was a possibility along the way.

“I knew that no matter where you play, the NFL will find you”, he said on 93.7 The Fan. “Charlotte, the year I went there, they were transitioning to being a Division I FBS school, and I knew that if I would be able to ball out there, I would have a shot”.

Can’t wait to chop it up tomorrow with @highsmith34 in the first of many @Steelers sit-downs on @937thefan!

Tune in or join us live at @MineosPizza to learn more about the man inside the No. 56 jersey.

“But really, my main goal was just earning a scholarship, because I walked on”, he said about his initial priorities. “I got there, I didn’t even get invited to camp my freshman year, walked on the first day of school and just kind of hit the ground running from there. Kept my mouth shut and just tried to outwork everybody and work as hard as I could”.

It is equally interesting and sobering just to think about how many potentially great players might never have made it to the NFL simply because the circumstances—whether financial or otherwise—didn’t allow. There are enough guys who almost didn’t make it to believe that there are plenty who really never did.

In fact, the day that Highsmith was told, going into his redshirt sophomore year, that he was going to be getting a full ride to play on the football team is one that is etched in his memory, recalling the day his coach called him into his office to let him know.

“It was such joy, because I knew that my hard work had paid off. I went and told all my boys, told all my teammates”, he said—but not his family, not yet. “I waited to tell my family until I got home because I was going home that day for the summer because I didn’t know if I was gonna come back or not”.

And why didn’t he know if he was going to come back? Money, of course. Tuition. Imagine if Highsmith’s NFL future were thrown in jeopardy simply due economics—well, that’s the story of many, unfortunately, but at least we have Alex Highsmith here get to see the fruits of his labor. And he’ll be becoming a rather rich man in 10 months or so, I suspect.