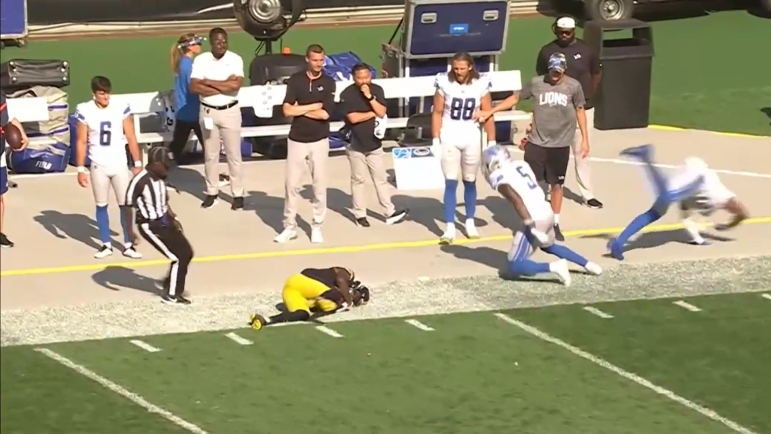 Question: What will the first injury report of the season say about Diontae Johnson’s availability for the season opener as he deals with a shoulder injury suffered in the preseason finale?

Diontae Johnson suffered a shoulder injury in the Steelers’ preseason finale while hauling in a nice downfield pass from Mitch Trubisky. It was quite a nice play that helped cement the image of Trubisky as a quality current option as the team’s starter (up to that point, he had only been allowed five drives combined in the first two preseason games).

But without further knowledge, at this point, we have to wonder if it might not have been a bit costly. Now, we currently have no reason to suspect that there are any long-term concerns with regards to Johnson’s shoulder, but it’s been clearly signaled that it is bothering him, and he didn’t seem to participate in practice yesterday.

But today is Wednesday, and that means the first injury report of the season will be coming out, so we’ll have a clear picture of just where he is. Did head coach Mike Tomlin just hold him out of Tuesday’s practice because it was a ‘bonus’ day of practice?

We’ll have a better understanding of whether or not we should be concerned about the prospects of Johnson being available for the season opener this afternoon. If he participates in practice at any level, obviously, that’s a great sign. If he doesn’t participate at all, well, that still doesn’t mean doom and gloom, but if he’s not going to play, he’s also not going to practice.

Johnson is unquestionably the Steelers’ number one receiver entering the 2022 season, no matter how promising George Pickens might appear, and with a new quarterback under center, it would certainly be valuable to have such a reliably open, high-volume target to be at his disposal, so here’s hoping he is on the field in Cincinnati to help Trubisky make a good first impression as the immediate successor to Ben Roethlisberger, no matter how short (or long) his tenure might prove to be.