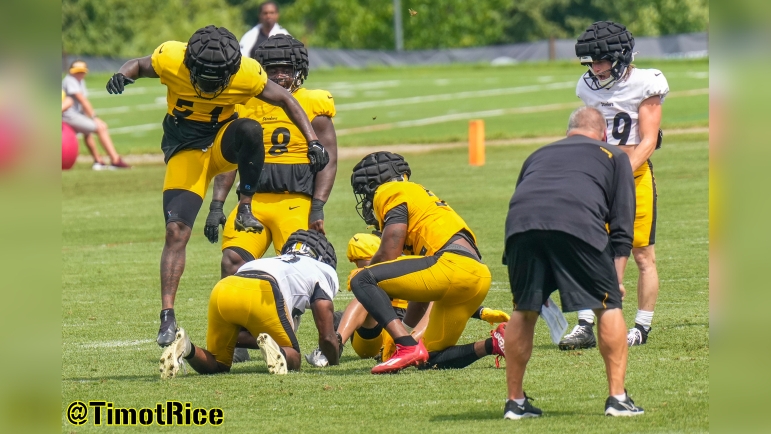 The Pittsburgh Steelers had cap space at the start of this offseason, and they used it, too. Although some of it came from lateral moves, such as bringing in veteran linebacker Myles Jack as an offset to cutting the man he was to replace, Joe Schobert, nobody can deny that they used the resources available to them in 2022 to grow the team.

And T.J. Watt is seeing the difference that Jack has brought to the defense, as he told Pat Kirwan, Jim Miller, and Paul Alexander during his spot on Movin’ the Chains on SiriusXM Radio earlier this evening. Friday Night Lights practice was canceled, but fortunately the interviews were conducted in advance.

“I think out of like, five or six practices, he has like, three or four punch-outs already, so he’s a very ball-aware player as a defender”, Watt said of Jack, the team’s new mack. “And he’s shooting gaps. Him and Devin [Bush] have been shooting gaps this whole camp so far. Anytime they’re coming downhill and taking the double teams off the guys inside, it’s gonna be winning football for us”.

The Steelers haven’t had a consistent presence at linebacker who could be so disruptive since Ryan Shazier, so it certainly would be a welcome addition if Jack can add that presence to the front seven this year. Based on training camp observations going back to last week, they have been able to do that.

Originally a second-round draft pick by the Jacksonville Jaguars, Jack was let go earlier this offseason, and the Steelers were quick to pick him up, signing him to a two-year, $16 million contract, which is quite a big contract for them in terms of outside free agents.

He was immediately plugged into the mack linebacker spot, though the first ‘official’ depth chart of training camp released earlier today showed Bush listed as a co-starter with Robert Spillane, so apparently there are some unresolved lineup alignments yet to be determined.

While much of the blame for the run defense last season fell upon the backs of the defensive line, which was without both Stephon Tuitt and Tyson Alualu, the play at inside linebacker ought to be faulted as well. The struggles that Bush had were well documented, but Schobert never really looked comfortable during his one year here.

While the Steelers were still able to get after the passer just fine last season, the run defense was a significant detriment to the team’s overall efforts. They finished last in the league in just about any means of measurement, including the proverbial ‘eye test’, and fixing that has been a priority.

Tuitt may have retired, but they have Alualu back, and they added Larry Ogunjobi to fill Tuitt’s void, while swapping Schobert out for Jack and putting Bush’s starting job in contention. Will that be enough? If the linebackers are shooting the gaps and helping to make plays, then perhaps it will. Especially if Jack is going to create some fumbles, which historically he hasn’t done (only two in his career).